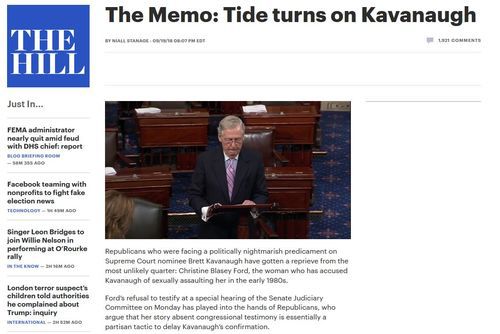 Kavanaugh The Only SCOTUS Candidate Good On Immigration—Is That The Problem?

You have to admire the Democrats/ Main Stream Media. They have reached a new heights of enterprise with their after-hours attempted mugging of Supreme Court nominee Brett Kavanaugh over an alleged 35 year-old non-criminal episode of which the accuser herself does not remember the details. Latest word, although things are changing quickly: he’s going to make it: The Memo: Tide turns on Kavanaugh, [By Niall Stanage, The Hill, September 19, 2018]. But still…

For immigration patriots, however, there’s only one option: to stand by Kavanaugh 100 percent. He is undoubtedly the best pick for the Supreme Court for an America Firster, which is why Leftists are so committed to his destruction. Out of all the possible candidates on President Trump’s shortlist, Kavanaugh was the only one proven to stand strong on immigration.

In his role as a DC Circuit Court judge, Kavanaugh has consistently argued against the traitorous perfidy of Cheap Labor enthusiasts. In 2014, he issued a powerful dissent against his own court’s ruling in favor of Fogo de Chao Brazilian Steakhouse exploiting our broken immigration system.

Fogo claimed their chefs and waiters qualified for L-1B visas because the restaurant claimed it needed foreign employees with "distinctive cultural background and extensive experience cooking and serving meals."

The DC circuit disgracefully agreed with the ridiculous idea that waiters can only obtain the necessary “specialized knowledge” to work for Fogo if they hail from Brazil. But Kavanaugh saw right through this preposterous argument. He said it implied that “Brazilian chefs are essentially born with (or somehow absorb during their formative years) a cooking skill that cannot be acquired through reasonable training, which seems an entirely untenable proposition.”

Kavanaugh’s conclusion: “At bottom, that seems to be at least part of what is going on in this case—namely, Fogo's desire to cut labor costs masquerading as specialized knowledge. But under the provision of the immigration laws at issue here, mere economic expediency does not authorize an employer to displace American workers for foreign workers.”

Imagine that—a Supreme Court justice who believes that the law protecting the interests of American workers is more important than “mere economic expediency.”

This is not the only case where Kavanaugh has shown his bona fides as an immigration patriot. In another case, he dissented forcefully against illegal aliens having the right to vote in union elections.

“The landmark Immigration Reform and Control Act of 1986, known as IRCA, forcefully made ‘combating the employment of illegal aliens central to the policy of immigration law’,” Kavanaugh wrote in his dissent. He argued that the ruling in favor of illegal aliens undermines “the legal workers, whose votes may have been diluted or overridden in the union election by the votes of illegal immigrant workers.”

Besides immigration, Kavanaugh has also diverged from Conservatism Inc. orthodoxy on protecting American enterprise from foreign competition. In a concurring opinion on a 2014 ruling upholding the legality of country-of-origin labeling, he argued, “country-of-origin labeling is justified by the Government's historically rooted interest in supporting American manufacturers, farmers, and ranchers as they compete with foreign manufacturers, farmers, and ranchers.”

These America First opinions are not found among the three other judges widely mooted for this Supreme Court.

The records of these judges would not matter if there wasn’t so much talk about dropping Kavanaugh over this vile hit job.

Conservatism Inc-ers hope Barrett would get picked, but considering the Roe v. Wade litmus test from wimp Republicans and the shattered spirit of GOP leaders if Kavanaugh fails, it’s doubtful she would get the nod. [Susan Collins, Pivotal Moderate, Says ‘Hostility’ to Roe Would Sway Her Vote, by Nicholas Fandos and Emily Cochrane, New York Times July 1, 2018] Instead, it would probably be either Kethledge or Hardiman—both of whom are anathema to immigration patriots.

The courts are trying to declare themselves the ultimate arbiters of immigration policy , a fact President Trump knows quite well. Brett Kavanaugh is the only option we have in that regard. Now it’s up to Republicans to show some courage.

It would be to the GOP’s own great peril if they fail. You could even see Democrats demand Clarence Thomas’s impeachment over Anita Hill if the current nomination goes their way. How are Republicans going to tell them to go pound sand in the wake of a capitulation on Kavanaugh?

Republicans must stand by Kavanaugh. Our country’s future depends on it.