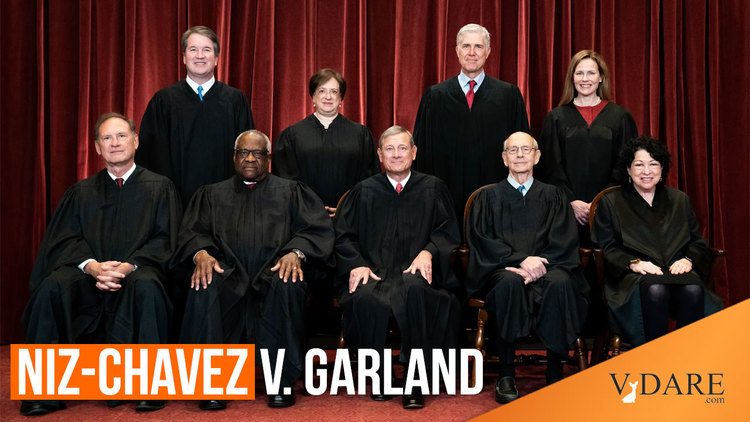 What once was a country based on the separation of powers, America has slowly morphed into a kritarchy—the rule by judges.

Exhibit A: The Supreme Court’s recent decision to side with an illegal alien who is challenging his deportation order.

ABC News highlighted the latest kritarchic madness coming from the highest court of the land:

The Supreme Court on Thursday sided with an undocumented Guatemalan immigrant seeking to challenge his removal from the U.S. by immigration authorities.

In a 6–3 decision authored by Justice Neil Gorsuch, the court said the Justice Department was violating federal law by not providing immigrants it seeks to deport with a single, comprehensive "notice to appear" with details on the charges and scheduled court appearance.

Agusto Niz-Chavez, the Guatemalan national in question, first illegally entered the US in 2005:

“Agusto Niz-Chavez, who brought the case, illegally crossed the southern U.S. border in 2005 and eventually settled in Detroit, Mich. In 2013, the government initiated removal proceedings against him -- first sending a notice of the charges and later sending a second notice with the date and time of his court appearance.”

What this recent case focused on was the multiple deportation notices Niz-Chavez received:

“The timing of the multiple notices was at the heart of the case. Under federal law, an immigrant can only appeal a removal order if they've been in the U.S. continuously for at least 10 years, and the same law says that the clock stops once a notice to appear is issued.

Niz-Chavez argued the multiple notices he received did not constitute a single notice to appear as required by law.”

Neil Gorsuch, a paragon of Con Inc jurisprudence and one of Trump’s lackluster picks for the Supreme Court, wrote the majority opinion in this decision and offered a strange rationale for his ruling:

"At one level, today’s dispute may seem semantic, focused on a single word, a small one at that. But words are how the law constrains power. In this case, the law’s terms ensure that, when the federal government seeks a procedural advantage against an individual, it will at least supply him with a single and reasonably comprehensive statement of the nature of the proceedings against him.”

"The Court today agrees with Niz-Chavez that, in order to stop the 10-year clock, the Government must provide written notice in one document, not two. I find the Court’s conclusion rather perplexing as a matter of statutory interpretation and common sense. I therefore respectfully dissent.”

Overall, this case hamstrings the government’s ability to fast track the expulsion of illegal aliens during a time when the southern border is getting zerg-rushed and the court system is being swamped with deportation cases as we speak.

Once in a blue moon the Supreme Court gets certain issues that align with the interests of right-wing whites, for example, the Second Amendment. But these cases that yield positive rulings are few and far between. In reality, the Supreme Court is one arm of the managerial regime that labors diligently to dispossess whites.

With a federal government being derelict in its role to protect our border and maintain the demographic integrity of our nation, perhaps the states will have to go above and beyond by building their own immigration enforcement  infrastructure.