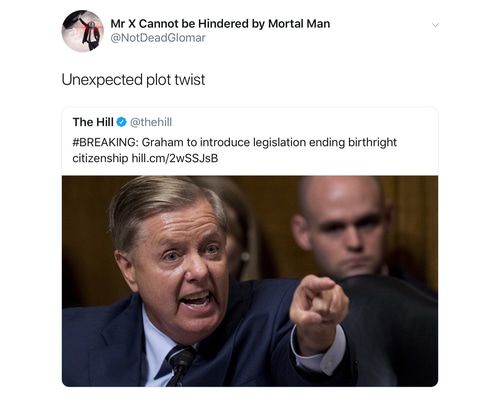 America issupposed to be a nation, not a shopping mall. Therefore, American citizenship has to be something real, not a prize awarded to hostile invaders who crawl across the border to take advantage.

The top priority of American journalists, is, as The New York Times now openly admits, to replace Americans with foreigners who are more likely to do their bidding. Birthright citizenship is a critical component of their agenda, as it makes being "American" practically meaningless and makes voting largely a waste of time. Every Third Worlder who crashes our gates effectively disenfranchises one actual American.

Thus, President Trump's recent declaration that he will end birthright citizenship has the usual suspects furious. Notice the way this AP article is written, without even the pretense of providing facts and designed to incite outrage.

WASHINGTON (AP) — President Donald Trump is making another hardline immigration play in the final days before the midterm elections, declaring that he wants to order an end to the constitutional right to citizenship for babies born in the United States to non-citizens. Most scholars think he can’t implement such a change unilaterally.

With seven days to go before high-stakes elections that he has sought to focus on fearmongering over immigration, Trump made the comments to “Axios on HBO.” Trump, seeking to energize his supporters and help Republicans keep control of Congress, has stoked anxiety about a caravan of Central American migrants making its way to the U.S.-Mexico border.

His administration announced Monday it was dispatching thousands of active-duty troops to the border, and Trump said he’d set up tent cities to house asylum seekers.

Trump has long called for an end to birthright citizenship, as have many conservatives. An executive order would spark an uphill legal battle for Trump about whether the president has the unilateral ability to declare that children born in the U.S. to those living here illegally aren’t citizens. Most scholars think he can’t.

Of course, it's not that "scholars" are afraid that President Trump will lose. It's that they know he will likely win.

Here's only a sample of VDARE.com's Birthright Citizenship Coverage over the years: