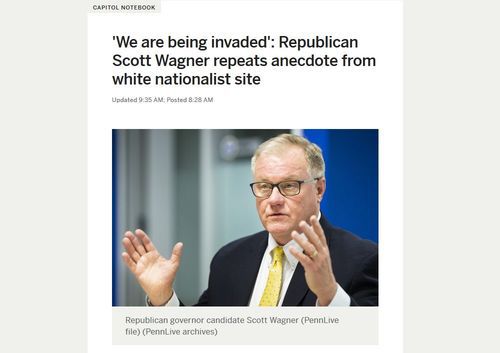 Now That EVERYTHING on the Right is “White Nationalist”—Is That a Good Thing?

A columnist in Harrisburg, Pa. has attacked the Republican candidate for governor for quoting a “white nationalist” website.['We are being invaded': Republican Scott Wagner repeats anecdote from white nationalist site, by John L. Micek [Email him] PennLive.com, September 20, 2018]

The “white nationalist” website turns out to be Alex Jones' InfoWars.

(Which you'd think a journalist might mention has been banned from certain platforms in unprecedented ways.)

The expected reaction—reflected in the comments section—is to deny that InfoWars is a “white nationalist” website.

And indeed, the case for that seems awfully weak. I'm not aware of Jones ever explicitly advocating for whites or anything remotely like calling for a whites-only nation (which would be the technical definition of a white nationalist.)

But it's got a nice sinister hiss to it.

For years, of course, those of the right have run from charges of racism, white nationalism, etc. But the more the terms are lobbed, the more we all get used to them. Shock value starts to decline.

It's also pretty obvious that the range of conservative stances one can take without being called racist is shrinking. Gun rights, for instance, used to be pretty safe, but it's becoming less so.

Which in turn gives actual white advocates lots more room to work, and the ever-protesting "colorblind conservative" more to think about.