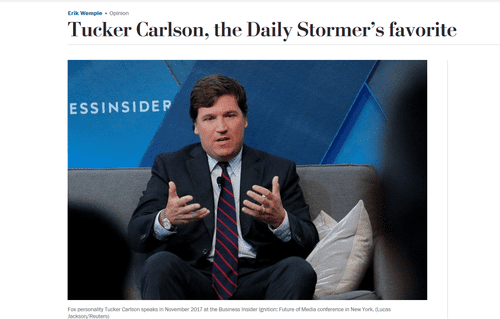 WASHINGTON POST: Tucker Carlson Is Guilty Under The Transitive Property Law Of Crimethink

The analysis marks a vindication of Carlson’s apparent programming strategy for his eponymous program, “Tucker Carlson Tonight.” Whereas a host like Hannity, for example, forever parrots Trump’s talking points — the Robert S. Mueller III investigation is a “witch hunt”; the “fake news” media is out to get the president — Carlson has consistently pursued storylines and polemical themes that please racists. Carlson hypes alleged crimes and dislocation caused by immigration; he demands that U.S. elites defend the cliche that diversity is our greatest strength; he circulates bogus material about South Africa’s alleged injustices against white farmers; and he cheers on Trump’s hard-line immigration policies. …

Could this be an unfortunate coincidence? Is it possible that these racists aren’t fully understanding Carlson’s message? No, the danger is that they understand it all too well. Media Matters compiled a video of Carlson’s pronouncements about diversity and demographic change alongside those of alt-right/white nationalist figures. The upshot is that the Fox News host dresses his version of this ideology in belletristic flourishes with a shiny television studio backdrop, whereas the other folks are in less artistic formulations in pedestrian settings. For instance, Carlson once said on his program, “Latin American countries are changing election outcomes here by forcing demographic change on this country at a rate that American voters consistently say they don’t want.” White nationalist figure Christopher Cantwell said, “It sounds to me like we got a problem with people who got here illegally altering the landscape politically. I don’t like it. F— you. Stop it.”

So, there you go: Carlson noticed a fact that was also noticed by a Bad Person, so the Transitive Property Law of Crimethink proves that Carlson is a Bad Person too.

(Do I have the name of the Property right?)

In my new book review of Ship of Fools, Carlson’s bestseller, I note:

Interestingly, despite his clarity of expression, almost nobody has noticed Carlson’s growing ideological centrism. But that’s because what matters most to contemporary intellectuals is not policy but keeping the alliance of the margins together by blaming straight white males. And Carlson is the exemplification of straight white maleness.

Yet, as he writes:

At the moment, the coalition of identity groups has held together because it is united in a single purpose against white male power. But rapid demographic change makes this unsustainable. When the traditional scapegoat becomes insufficient, various factions will turn on one another.