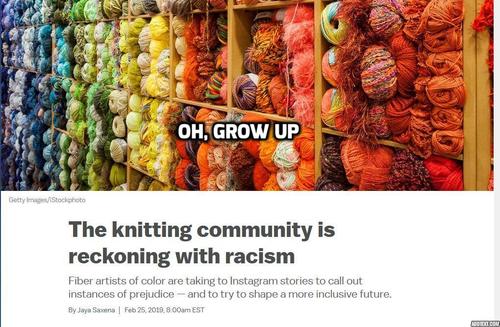 VOX: "The Knitting Community Is Reckoning with Racism"

The knitting community is reckoning with racism

Fiber artists of color are taking to Instagram stories to call out instances of prejudice — and to try to shape a more inclusive future.

aren Templer’s Fringe Association Co. is kind of like Goop for knitting. There are tips and how-tos for navigating knitting’s trickier maneuvers. There are knit-alongs for chunky cowls and cute fingerless gloves. There’s an online store that sells the Fringe bag, which has come to be known in some circles as the Birkin of knitting bags. And there’s the blog where Templer puts her personal thoughts.

On January 7, she blogged excitedly about her upcoming trip to India. She wrote that 2019 would be her “year of color.” She said that as a child, India had fascinated her, and that when an Indian friend’s parents offered to take her with them on a trip, it was “like being offered a seat on a flight to Mars.” She spoke of her trip as if it were the biggest hurdle anyone could jump: “If I can go to India, I can do anything — I’m pretty sure.” Templer, it should be noted, is white.

Do people in India wear hand-woven sweaters, mitttens, and mufflers much? Maybe in Kashmir and Simla?

As someone who is mixed-race Indian, to me, her post (though seemingly well-meaning) was like bingo for every conversation a white person has ever had with me about their “fascination” with my dad’s home country; it was just so colorful and complex and inspiring. It’s not that they were wrong, per se, just that the tone felt like they thought India only existed to be all those things for them.

The initial comments on Templer’s blog post were supportive, but quickly, knitters and fans began to criticize her tone. “Karen, I’d ask you to re-read what you wrote and think about how your words feed into a colonial/imperialist mindset toward India and other non-Western countries,” wrote commenter Alex. “Multiple times you compare the idea of going to India to the idea of going to another planet — how do you think a person from India would feel to hear that?”

Templer has since apologized for her post, writing, “It took women of color pointing this out for me to see it ... which is not their responsibility, and I am thankful to them for taking the time,” and that she’d be continuing to raise visibility of people of color (and specifically black/indigenous POC) knitters and their work. (Templer declined to comment for this piece.) But her post triggered a wave of conversations about racism and prejudice in the fiber arts world, which thus far shows no signs of slowing down.

Read on to find out all you could ever want to know about the Racist Knitting Conspiracy.