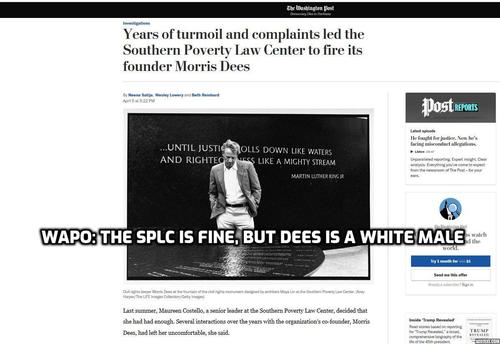 The Washington Post runs a long article about how, while the SPLC is trustworthy, co-founder Morris Dees was actually a white male and therefore had to go.

… “Why is he still here?” Costello said she asked Cohen, an exchange she documented that day in an email to a colleague. “People see him as racist and sexist.”

“Or an anachronism,” Cohen responded, according to Costello. “That would be kinder.”

Dees, 82, was fired last month for unspecified misconduct, igniting a rush of speculation about what had come between him and the organization he built into a legal and fundraising behemoth. The nonprofit said that Dees had acted in ways that did not reflect “the mission of the organization.”

Internal documents reviewed by The Post, along with interviews with current and former employees, suggest that the celebrated civil rights organization had been bitterly at odds with its founder for several years. Those battles have centered on his refusal to retire, his behavior toward women and his comments regarding race, according to the documents, the employees and Dees himself.

In a series of emails and an interview with The Post, Dees, who is white, strenuously denied any racist or sexist behavior and said he was not fired for misconduct.

“I built the Southern Poverty Law Center out of nothing,” Dees said in an interview last week in Montgomery, where he lives and the SPLC is based. “This stuff that they’re after me about is just total crap.”

Interestingly, the Washington Post can’t come up with any smoking guns against Morris.

Part of their problem is that they don’t want to report basic facts, like that Morris has been divorced five times. To be divorced by one wife could be a misunderstanding, but to be divorced by five wives bespeaks of … well, something reflecting on the basic credibility of the SPLC. It’s almost as if Morris is less the greatest moral authority of our time than a junk mail living legend who hit upon a great grift. Perhaps they are worried that readers might wonder why the Post has been quoting the SPLC as an unbiased oracle for all these years …

The anecdotes in this article are mostly like this:

In late 2017, the organization investigated a complaint from a female employee about Dees’s behavior after a fundraising event in Atlanta. Dees said that at a social gathering, he approached the woman, put his hand on her shoulder and asked her about a visible tattoo on her arm. He said that, after she asked if he had any tattoos, he pointed to the front of his clothed right thigh, where he said he had one.

Okay … well, how is Morris going to find Wife #6 if he doesn’t flirt with women? It sounds like she got creeped out that, briefly intrigued by the prospect of becoming the Widow Dees, she flirted back with an octogenarian.

… And they brought up two allegations of racially insensitive comments.

The first of those complaints concerned remarks Dees had allegedly made about black voter turnout. According to Dees, a senior employee complained that he had said low black voter turnout in Montgomery ensured no black candidate would be elected mayor. He said he could not recall making the remarks ascribed to him….

Never complain about low black voter turnout. White men are not allowed to say anything complaining about blacks, including: Gee, it would be nice if blacks would vote more.

The other complaint that the board members brought up, Dees said, stemmed from a lunch in 2015 with Don Terry, a journalist who at the time was a senior writer for the nonprofit. According to Dees, the men were discussing a recent car accident, and he remarked that he had heard black teenagers in Montgomery are more likely to run red lights.

“Thank you for being open-minded about my challenge,” Terry, who is black, wrote back.

Hey, Morris, it is not too late to come over to the pro-science side.

… The nonprofit has promised that change is underway. It has hired Tina Tchen, Michelle Obama’s former chief of staff, to review its “workplace culture and its past practices and policies.”

Tina Tchen … where else have we heard that name lately?

And on Tuesday, board member Karen Baynes-Dunning, a black woman and former juvenile court judge, was named interim president to succeed Cohen.

Certainly, Morris had it coming … Yet, still, he was a giant at what he did and the people pushing him out are dwarves. I will miss Morris: