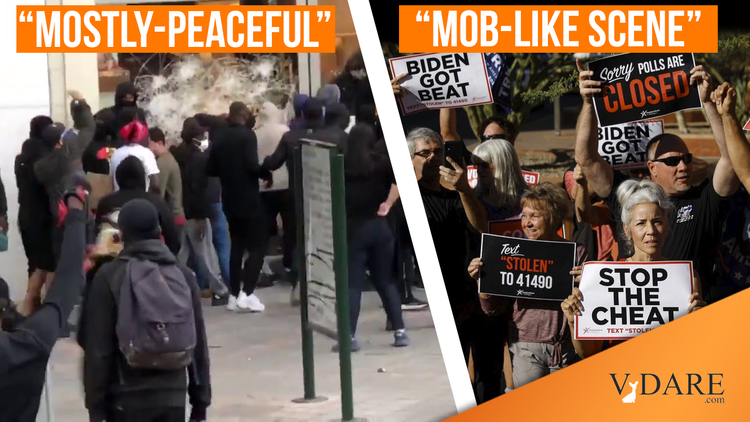 I got this alert on my phone to a news story from Esquire magazine:

For the moment, I've misplaced the link, but I don't care. The thing is that mild but vocal objections to being shut out of vote-counting by Republicans are now "chaos." That's after months of actual chaos by black and white Democrat supporters of BLM/Antifa.

I’m outside the building, where a crowd is literally praying and cheering.

There’s no rioting out here. Nothing remotely violent. https://t.co/BrxiYis0Eh

Hey media - this is what a peaceful protest looks like. https://t.co/sk9ekRWw2q

Is the election being stolen? Well, don't expect people to believe it isn't based on MSM reports.

The problem with all of this talk about voting irregularities in some states is that I no longer have any way of properly judging whether the claims are backed by any substance because I know right off the bat that I can't trust the mainstream media to report truthfully on it.

What credibility the media had left has been burning, or being toppled, or been savagely beaten, during the last few mostly peaceful months.

In the meantime, from "mostly peaceful" Portland, a reminder from Andy Ngo of  what actual chaos looks like.

The National Guard was activated for the first time tonight in Portland at the #antifa riot. In the past six months of rioting, the governor refused to bring in the National Guard. #PortlandRiots #antifa https://t.co/A3Rcrjkbov

And one more point: a bunch of Republicans shouting objections to vote-fixing by the Gore camp in Florida in the year 2000 was called the "Brooks Brothers Riot" because it was committed by middle-class white Republicans.  A headline in the Washington Post about this two years ago was

‘It’s insanity!’: How the ‘Brooks Brothers Riot’ killed the 2000 recount in Miami

Eighteen years after a chaotic recount, debate still rages over whether the antics went too far.

Reminder that the Washington Post supports anti-war riots, anti-Trump riots, anti-conservative riots, and Antifa riots that target white conservatives, as at Charlottesville. But these people were doing "antics" that "went too far."

Next is from the Washington Post, Nov. 15, 2018. We see the same pattern of selective reporting played out again.https://t.co/XzOCjvHFlF