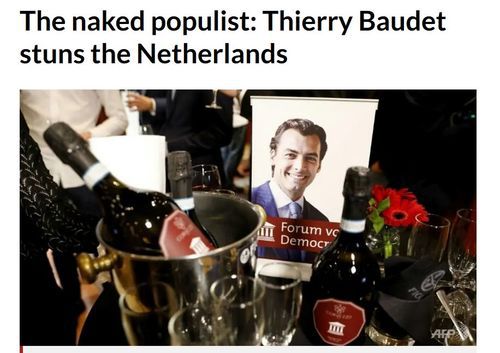 Two years ago, the Forum for Democracy was a new fringe party in the Netherlands. Today, it is poised to become the largest party in the Dutch Senate after a decisive victory in recent elections. [Dutch government loses Senate majority amid populist surge, by Toby Sterling and Bart Meijer, Reuters, March 20, 2019] And the Forum’s model has important lessons for patriots around the West.

Forum’s leader is Thierry Baudet, who is educated, charismatic and skilled at deflecting a hostile media utterly determined to paint him as “the telegenic European face of a Donald Trump-style alt-right politics”. [The naked populist: Thierry Baudet stuns the Netherlands, Channel News Asia, March 21, 2019] He baffled journalists with classical references during his victory speech, declaring, “The owl of Minerva has landed” . [New populist star emerges from Dutch local elections, by Mike Corder, Washington Post, March 21, 2019] One Dutch-language article broke down Baudet’s “remarkable” statements to explain how racist and evil they were. For example, Baudet referenced the “Boreal World” and how it is being destroyed by those who should protect it. Naturally, this was explained as a way for “right-wing nationalists to talk about… the Aryan race”. [De speech van Baudet: 5 opmerkelijke uitspraken en wat ze betekenen, RTLNieuws, March 21, 2019]

When journalists and academics are panicking this way, you’re probably doing something right. Corné Hanssen of the University of Utrecht asked on Facebook, “Volkert, where are you?” [“Walgelijke Utrechtse universitaire docent roept op tot moord van Thierry Baudet: ‘Volkert, waar ben je?!,’ by Tim Engelbart, De Dagelijkse Standard, March 21 2019] This is a reference to Volkert van der Graaf, the murderer of Dutch populist Pim Fortuyn in 2002. (The answer, by the way, is that van der Graaf was paroled in 2014, after serving 11 years of an 18-year sentence.)

Yet Baudet is no fascist, nor is he offering an absurd program based on utopian abstractions. Instead, his policies are very down-to-earth. In the immediate aftermath of the recent shooting in Utrecht (a terrorist attack mostly ignored by the English-speaking media), Baudet defied the other parties by continuing to campaign and condemning terrorism.

In campaign advertisements, the Forum for Democracy specifically identified the Australian immigration model as one to follow. It also sounded the alarm about the high percentage of “non-Western” (Niet-Westerse) residents in the country. The UN Migration Pact was also a major campaign issue for Forum.

Baudet also seized on critical opportunities provided by the arrogance of the governing coalition regarding economic issues. Like the Yellow Vest movement, Baudet’s Forum for Democracy condemned measures designed to combat “climate change” that pushed costs onto ordinary Dutch families and increased the cost of living. A number of supporters of the ruling party (People’s Party for Freedom and Democracy—VVD) defected to the Forum for Democracy over this issue. [Right-wing nationalist FVD big winners in Netherlands’ First Exit Polls, by Zack Newmark, NL Times, March 20, 2019]

Baudet also takes idiosyncratic views that seem practically designed to invite mainstream media hostility. Forum for Democracy wants a referendum on Dutch membership in the EU. He also spearheaded a referendum on a Ukraine-EU Associated Agreement, in which over 60 percent of Dutch voters said “no”. [Newcomer Euroskeptic, anti-migrant party jumps to 2nd spot in Dutch polls, Russia Today, February 20, 2019]

Like Donald Trump, Baudet also took advantage of new media, particularly YouTube. Though practically every mainstream media outlet was overtly hostile to him, he was able to go around them and take his message directly to the people. [Wynia’s Week: Thierry Baudet’s meteoric electoral rise explained, DutchNews, March 21, 2019] Of course, this is also why maintaining freedom of speech online is so important.

For most people in the English-speaking world, the best-known representative of Dutch populism is Geert Wilders. Wilders’s PVV party suffered in the recent elections and Baudet took about a third of his vote from the PVV. One commentator declared the PVV looks like a “spent force”. [Not an explosion, but a very loud noise: has Baudet really changed the landscape? By Gordon Darroch, DutchNews, March 21, 2019] Yet though Wilders and Baudet draw different kinds of support, they are by no means enemies. Baudet attracts more middle-class and upper-class support than Wilders, and his message is more broad-based than Wilders’s endless hammering on Islamization.

Baudet is the third manifestation of Dutch populism. Fortuyn, an openly (some would say flamboyantly) gay social liberal, gained attention because he broached the topic of Islamization in the Netherlands. Geert Wilders turned the issue into a rallying cry for an entire movement. Yet Baudet seems to be building something more substantial. His party is not simply an anti-Islamization crusade, but a movement for direct democracy, opposition to the European Union, and a pro-Dutch, pro-Western vision of identity.

In 2014, Baudet spoke at the IJerwake, an even that unites Flemish nationalists. He called for Flemish independence from Belgium, the dissolution of the EU and the embrace of nationalism as “the force that makes the democratic constitutional state possible”. [“Alles is communautair, zeker sociaaleconomische problemen,” Knack, August 24, 2014] Baudet has consistently promoted this idea in his books, speeches, and writings throughout his entire career. [Is Dutch bad boy Thierry Baudet the new face of the European Alt-Right? By Sebastiaan Faber, The Nation, April 5, 2018] Journalists and other enemies of Europe howl this is “white nationalism” but it looks more like common sense—a common culture and identity is necessary for building a society defined by the rule of law and “democracy” presupposes a demos, a people. [The problem of democracy—a review, by Benjamin Jones, Generation Identity UK, January 19, 2019] What’s more, as even Baudet’s critics admit, Forum for Democracy is winning a large amount of youth support, far more than Wilders. Baudet has managed to do this even while forming links with American white advocates, notably Jared Taylor. [The New Dutch Disease Is White Nationalism by Thijs Kleinpaste, Foreign Policy, March 20, 2018].

Unlike the PVV of Geert Wilders, the Forum for Democracy is not just a one-man show. It began as a think tank and runs a whole series of lecture programs, training organizations, and youth movements. Programs cover not just current events, but a throughout philosophical grounding in the ideology of the European New Right. In short, the party is building cadres. This is the same approach some Europeans in other nations are taking, notably with the youth training school set up by Maréchal Le-Pen in France. [Marine Le Pen’s niece to opening training school for far-right leaders, by Jon Henley, The Guardian, April 20, 2018]

In America, no such infrastructure exists. This is part of the reason the Donald Trump movement was so easily subverted by grifters and con arts who are promoting the same tired ideology that Trump himself overcame in the 2016 election. While the Europeans are building an ideology that can defend the nation-state and trained networks that can fight for it effectively, American conservatism is rudderless, leaderless, and increasingly embarrassing. President Trump himself is almost irrelevant. While the Europeans are pushing the debate in their direction, American conservatives have been stuck in a defensive crouch since 2016, desperately insisting that their enemies are the real sexists, or racists, or anti-Semites.

The Forum for Democracy model of building a party from nothing has far more to teach Americans than anything you will hear at CPAC. For that reason, patriots should take heart at the victory in the Netherlands. They should also start learning the lessons from the Europeans about the importance of building cadres, networks, and an ideology more substantive than cutting the taxes of the oligarchs who hate you. The best news—the European Parliament elections are only a few months away, and it looks like there are more victories to come.