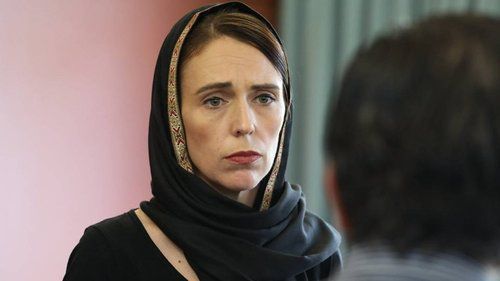 After Christchurch: Why Prime Minister Jacinda Ardern Was The Wrong Leader For New Zealand

New Zealand has a very serious problem. Of course, any Western country would be in trouble in the wake of a malcontent of European descent massacring 50 people in a mosque and live-streaming it over Facebook. From Ireland to Australia, such an outrage would certainly lead to attempts to tighten the Politically Correct screw, to further suppress criticism of immigration and multiculturalism, and to move towards an even more authoritarian Leftist state. But in New Zealand, the situation is so much more serious…because the Prime Minister is emotionally unstable, even by female standards.  And, although it’s no longer Politically Correct to mention, that’s saying something

Almost everything that 38 year-old Jacinda Ardern has done in the wake of the bloodshed in Christchurch has spoken volumes about her perilous psychological state. Forget the impetuous, knee-jerk reaction of banning semi-automatic weapons [Assault rifles to be banned in New Zealand in aftermath of massacre, Prime Minister announces, Sandi Sidhu & Helen Regan, CNN, March 21, 2019,], and the convulsive efforts to curb the internet, including a bizarre ban on the U.S.-based financial website ZeroHedge. [NZ Threatens 10 Years In Prison For 'Possessing' Mosque Shooting Video; Web Hosts Warned, 'Dissenter' Banned, by Tyler Durden, March 18, 2019] Ardern has had the Muslim call to prayer broadcast across the country. She has publicly donned Islamic dress, when not even in a mosque, in order to show solidarity with New Zealand’s Islamic community, and she has encouraged other Kiwi women to do the same—in other words, ironically, to conform to a patriarchal aspect of Islamic culture. [New Zealand Will Broadcast The Muslim Call To Prayer Across The Nation And Have Jesus Removed From Their Parliamentary Prayer, by Alex Graham, Defiant America, March 20, 2019]

In a curiously superstitious reflex straight out of the Harry Potter series, in which the villain Voldemort is referred to as “he who must not be named,” Ardern won’t even mention the name of the Australian in custody for the Christchurch bloodbath. [New Zealand “will give gunman nothing - not even his name”, Jacinda Ardern vows, Sky News, March 19, 2019]. And she literally burst into tears during the memorial for those killed in the attack. [New Zealand PM Jacinda Ardern bursts into tears during Friday sermon, The International News, March 22, 2019]

Ardern has gone miles beyond the status-playing virtue-signaling that we would expect of mainstream politicians—who of course are responsible for bringing unassimilable Islamic immigrants to New Zealand in the first place. Even the appalling Tony Blair (for whom Ardern once worked) did not have homosexual anthems played after the bombing of the Admiral Duncan pub in 1999. She has behaved in such an extreme way—“A leader with love on full display” according to the BBC [Jacinda Ardern: “A leader with love on full display”, by Ashitha Nagesh, BBC News, March 21, 2019] that one starts to question her state of mind.

And this is not just spiteful speculation. Jacinda Ardern’s mental health problems are a matter of public record.

Of course, females are, in general, higher than males in anxiety [Women are far more anxious than men – here’s the science, The Conversation, June 10, 2016].  But Ardern is extreme even for a woman. In an interview with British newspaper The Guardian in 2017 Ardern’s thoroughly sympathetic female interviewer noted that:

“It is an impressive performance from a politician who said for years that she was not interested in leading the Labour party, let alone the country. She has given multiple reasons, including a desire to have a family; a concern that her anxiety would preclude her from the top job, the condition having “ballooned” during her time as deputy [Prime Minister] and a wariness about the demands of the job, something she observed working for the then prime minister, Helen Clark, in 2005…

Ardern has frequently spoken of her anxiety. As recently as June, she said she was not cut out to be Labour leader: “When you’re a bit of an anxious person, and you constantly worry about things, there comes a point where certain jobs are just really bad for you.”

What the Guardian journalist failed to mention is that Ardern’s anxiety is not the kind that can be controlled with a course of anti-depressants or some therapy. It is so acute that she has apparently spent periods in psychiatric hospitals, rumors which she evasively failed to deny when a journalist put them to her. [Jacinda Ardern bats off health rumours: “I am robust enough”, by Dan Satherley, News Hub August 25, 2017]

In the Islamic communities before which Ardern, as the symbol of the New Zealand state, has prostrated herself, Jacinda would likely be dismissed as “insane” or even possessed by a jinn, the Islamic equivalent of demon.

People who are high in anxiety live in a world of constant worry in which nothing seems to make sense, not even themselves. They crave structure, order and simple reassurance. For this reason, they are prone to periods of intense religious and ideological fervor [Primary personality trait correlates of religious practice and orientation, by P. Hills et al., Personality and Individual Differences, 2004], in which their world briefly makes sense—and also to dramatic conversions to opposite worldviews and identities. [Prey Into Hunter: The Politics of Religious Experience, by Maurice Bloch, 1992]

This is exactly what has happened in Ardern’s life. She was brought up a Mormon but left the Church of Jesus Christ of Latter Day Saints in 2005 just as her Social Justice Warrior identity became ever more pronounced. Reportedly, it was the issue of gay rights which led her to leave and also set her on a journey which, by 2017, resulted in her declaring herself an agnostic.

One can only imagine all of the tensions, feelings of betrayal and conflicted emotions in the mind of someone who has tried to balance Mormonism with atheistic Multiculturalism and intense sympathy for Islam. How much worse must this psychological chaos be for a chronic anxiety sufferer?

Anxiety is also associated with Obsessive Compulsive Disorder, which might explain Ardern’s refusal to voice the name of the live-streaming Australian devil.

And to make matters worse still, Ardern gave birth, while already Prime Minister, on 21st August 2018. Considering her history of mental health problems, it would be a miracle if she wasn’t suffering from postnatal depression: frightening thoughts, constant sadness, anhedonia. Maybe that’s why she’s noticeably underweight.

Ardern also breastfeeds [Jacinda Ardern: “Having a baby around changes the tone a little bit”, by Eleanor Ange Roy, Guardian, August 10, 2018]. Though this does reduce anxiety, lactation also makes females less suspicious and makes them score higher on the “Socialization scale,” rendering them more inclined to build consensus and cohesion [Changes in personality pattern during the first pregnancy and lactation, by B. Sjögren et al., Journal of Psychosomatic Obstetrics and Gynaecology, 2000].

To put it simply, on the morning of the Christchurch Massacre, New Zealand was led by a lactating woman struggling with an episode of intense anxiety and depression, as well as deep and unresolved personal conflicts over religion, patriarchy and her sense of self. This unusually empathetic woman—while in the U.S. she worked in a New York soup kitchen, and, anyway, her empathy would be heightened by lactation—was confronted, as national leader, with immigrants whom she likely sees as the child-like oppressed, of whom she is already worryingly unsuspicious, being butchered.

This not only created a sense of chaos, a terrible thing for an anxiety-sufferer, but triggered all manner psychological conflicts she suffers from about patriarchal religion—the religion of her youth was, after all, polygamous until the late nineteenth century; Islam remains so—and, simply, who she is.

This all manifested itself in what amounts to a public breakdown which Ardern has done her best to induce in an entire nation, with a considerable measure of success. New Zealand appears to have gone completely mad—witness the banning of books by Jordan Peterson, who not only has never advocated violence, but is actually critical of white identity politics. [Jordan Peterson’s ’12 Rules for Life’ pulled by New Zealand bookseller over Christchurch mosque attacks, by Andrew Russell, GlobalNews.ca, March 22, 2019]. It’s all rather reminiscent of extraordinary outpouring of emotion in Britain when Princess Diana was killed.

Jacinda Ardern is a living, weeping embodiment of the problem of politics becoming too female dominated, especially by feminine females, as in the U.S. Democratic Party today..

She is making political decisions are made based on empathy for the invader for whom she has an unhealthy level of trust, on the value of cohesion at any cost, and on anxiety-induced emotions.

Of course, the Anglosphere has been indoctrinated into not questioning whether such a person is suitable to lead the country, potentially in times of war.

Sadly for VDARE.com readers, Ardern at one point seemed to be a throwback to an earlier type of left-wing politics, in that she actually campaigned on reducing immigration and formed a coalition government with Winston Peter’s New Zealand First party, which has made immigration patriot noises in the past. [Jacinda Ardern and Winston Peters on making their relationship work, by Tracy Watkins, Stuff, Oct 25 2018]

All that appears to be out of the window now. Although reducing Muslim and non-traditional immigration is the obvious answer, Ardern reacted angrily (“a disgrace”) to Australian Senator Fraser Anning for pointing this out. [Anning should face law over Islam slur: PM,, 9News.com.au, March 17, 2019]

There couldn’t be a more perfect storm for New Zealand than a mosque massacre under the Prime Ministership of a woman as emotional and stressed as Jacinda Ardern.