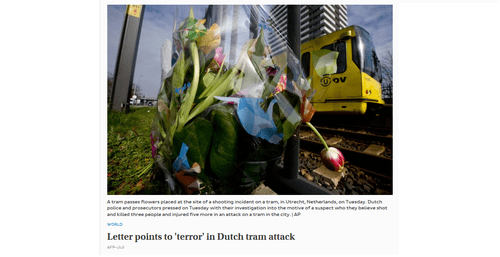 The terrorist attack in Utrecht has already dropped down the memory hole. However, some reports indicate that the shooting, which killed three and wounded five, was a direct response to the shooting in New Zealand. What's more, the shooter was of Turkish origin, and Turkish president Recep Tayyip Erdogan has actually been using videos of the New Zealand attack in his election rallies.

Dutch authorities said Tuesday they were “seriously” investigating a terrorist motive for the Utrecht tram attack because of evidence including a letter found in the suspected gunman’s getaway car.

Police were questioning Turkish-born main suspect Gokmen Tanis, 37, and two other men over Monday’s rampage in which three people were killed and seven injured, three seriously.

Dutch Prime Minister Mark Rutte had earlier said they “cannot exclude” other motives including a family dispute, but police and prosecutors said on Tuesday that the probe was leaning towards terrorism.

“So far, a terrorist motive is seriously being taken into account. This is based on a letter found in the getaway car among other things and the nature of the facts,” police and prosecutors said in a joint statement.

“Our investigation has established no link between the main suspect and the victims.”

As with so many of these cases, authorities had some prior knowledge of the suspect.

Turkish media reports Tanis is from Turkey’s central Yozgat province, which was the scene of several anti-ISIS operations in recent years. Tanis is said to have been arrested by the Turkish government for his connection with ISIS, but this remains a rumor. ISIS and other Jihadist groups have long operated in the region, said Turkish media.

Tanis is also thought to have fought against Russia in the First Chechen War from 1994 to 1996, but this is unconfirmed and conflicts with reports Tanis has been living in The Netherlands since 1993.

Tanis was known to Dutch police for both minor and major crimes, including a shooting in 2013, which is again being investigated.

[Is Revenge For Christchurch Shooting The Motive For Utrecht Killings?. by Arthur Villasanta, MSN, March 18, 2019]

Meanwhile, the MSM is doing its best to use the shooting in New Zealand as an excuse to deplatform its opponents and impose new repression against all white people.

In the days since the attack, attention has rightly been focused on the shooter’s admiration of white supremacists, especially violent ones like Norwegian mass murderer Anders Breivik, whom the shooter called his “true inspiration” and who allegedly gave his “blessing” for the attack. His manifesto called Donald Trump “a symbol of renewed white identity and common purpose,” and uses words that directly echo Trump’s own. The discussion can even be expanded to those who have helped shape the U.S. president’s message, like Steve Bannon, Stephen Miller, and Donald Trump Jr. It’s not unreasonable to place some measure of blame on those who have stoked the international spread of white-supremacist ideology...

We are a nation born of shame. A white-majority Australia exists only as the result of a genocidal invasion—another irony missed by Tarrant (and Trump) in his rants about invasion...

White Australians must no longer tolerate those mainstream voices who give white supremacy a platform and megaphone. Instead of brushing aside the racism in our homeland, or pointing instead toward Trump and the United States, we must call out dog whistles in our own government, in our own backyard, every chance we get. We must condemn hate speech not just when someone like Anning goes “too far,” and we must deny visas to alt-right figures who come to our shores expecting a friendly welcome not just in the wake of right-wing terror attacks, but always. We must fight the normalization of Islamophobia. And above all we must accept responsibility for the hatred we have normalized. Rather than go easy on ourselves, we must go hard.

[The Christchurch shootings should implicate all white Australians, by Rachel Withers, Slate, March 18, 2019]

So...do all Muslims bear the blame for Utrecht? Should we "go hard" against the Turkish government or fundamentalist Islamic preachers in mosques? Or does it not work this way? I wish the journalists that apparently govern us would just print a guide telling us what we are and are not allowed to say.