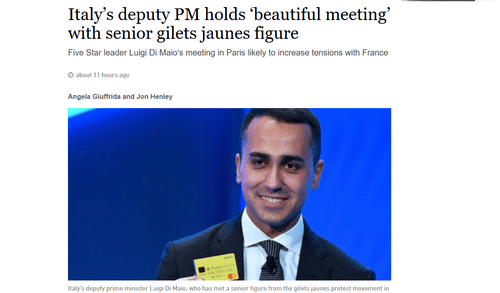 The upcoming EU elections increasingly look like a showdown between Italy and France, with Italy serving as the standard bearer for populist nationalism within the European Union, and France attempting to stem the rising patriotic tide. Of course, the French government has been rocked by the "yellow vest" protests, the most serious threat to the government of Emmanuel Macron that has emerged thus far.

Italy's Deputy Prime Minister just raised the temperature in the conflict by meeting with a "yellow vest" leader, essentially endorsing regime change in France. Interestingly, the politician in question is not a member of the nationalist Lega party, but of the Five Star Movement, the Lega's coalition partner.

Luigi Di Maio, the Italian deputy prime minister and leader of the anti-establishment Five Star Movement (M5S), has met a senior figure from the gilets jaunes (yellow vests) movement – a meeting likely to increase tensions between Italy and France.

Mr Di Maio and Alessandro Di Battista, a prominent M5S member, met Christophe Chalençon, as well as candidates that the protest movement has put forward for the European elections in May, on the outskirts of Paris on Tuesday. Posting a photograph of the group on Facebook, Mr Di Maio described it as a “beautiful” meeting.

Mr Di Maio had previously expressed his admiration for the gilets jaunes, who have been holding at-times violent anti-government protests each week across France for the past few months. He urged the movement not to “give up” and said the demonstrations reminded him of the spirit that gave birth to the Five Star Movement in 2009.

The French government reacted furiously to the meeting.

"This new provocation is unacceptable between neighbouring countries and partners at the heart of the European Union," a ministry spokesman said in a statement a day after Di Maio met the protesters on French soil.

"Mr Di Maio, who has governmental responsibilities, should ensure that he does not impair with his repeated interferences our bilateral relations, in the interest of both France and Italy," the spokesman said.

This comment is pretty rich considering Macron has directly insulted nationalist leaders in other countries, including U.S. President Donald Trump.