See also: National Data | Trump Is On To Something—Blacks HAVE Lost Ground in Obama’s Economy

Main Stream Media spinmeisters sprang to their posts today when Donald Trump made the entirely reasonable point that the collateral-damage shooting death of NBA star Dwyane Wade’s cousin while pushing her baby in a stroller—just another day in Obama’s Chicago—proved that blacks need his emphasis on law and order: Donald Trump's tweet on killing of Dwyane Wade’s cousin sparks uproar, by Reena Flores, CBS News, August 27, 2016. Similarly, they converted the Orlando shootings, devastating proof that the Clinton coalition has fundamental contradictions, into a SHOCK! HORROR!! scandal about Trump’s tactlessness in pointing this out: Donald Trump Faces Backlash for Tweets About Orlando Shooting by Sam Frizell, Time, June 12, 2016. But Trump is on to something—not just with blacks, but with moderate whites.

Social Justice Warriors entertain a paranoid view of the political landscape, not necessarily because they are themselves paranoid (though many clearly are), but because they know that provoking paranoia among their base allows them to exercise greater power over it.

Thus another striking example: Hillary Clinton’s crazy speech in Reno, NV where she denounced Donald Trump as a white supremacist. The goal of the speech: to define the campaign narrative—a narrative the MSM will continue to dutifully promote—that Donald Trump is an incorrigible racist.

Of course, the Left has been peddling different versions of this meme for a while.

But none of them really stuck, and the crowds at the Trump rallies continued to swell in size and enthusiasm. So Hillary came out with both barrels blazing by playing the KKK card.

Will it stick? Maybe not. The goal of Hillary’s speech is to force Donald Trump to play defense. And if Trump were to play defense by, for example, apologizing or disavowing or explaining himself (as most Republicans would do) she would have him beat.

But unlike most Republicans, Trump doesn’t play defense. Instead, he told Hillary “Shame on You” for smearing perfectly “decent people.”

That is uncommon courage for a Republican.

But Trump will have to keep it up, because his opponent’s narrative—“Donald Trump is a KKK racist”—is the only card they have.

The challenge: no matter how forcefully Donald Trump may speak on any subject, the MSM will either bury his remarks (as they did after his eloquent post-Orlando speech), or distort them to make him look as ridiculous as possible.

Thus the MSM falsely claimed that Trump’s August 19th speech in Dimondale was specifically directed to black audiences, and characterized it as bigoted. Actually, it was a pretty good speech intended for general Michigan voters, not specifically black voters. But you’d only know that if you actually watched it or read it.[ Full Transcript: Donald Trump speaks in Michigan, August 19, 2016]

Clearly, Donald Trump is never going to get a fair shake from the MSM. Therefore, he simply has no choice but to play aggressive offense.

Wade Johnson once argued on VDARE.com that immigration patriots should, like the Left, employ the language of assault in order to advance our cause.

This is wise advice—which Donald Trump should find easy to follow because the language of assault comes naturally to him, and he has a special gift for crafting tweetable one-liners (“We’re going to a build the wall and make Mexico pay for it”) and pithy epigrams (“Lying Ted Cruz”, “Crooked Hillary”) that have staying power.

Fortunately, the MSM often reports these catchy memes and remarks widely, obviously in the mistaken belief that they will harm rather than help (“You’ll never believe what Donald Trump just said about . . .”)

If Trump is to win, therefore, he must employ the language of assault to bypass the Left/MSM narrative and establish himself as the genuine America First candidate.

For example, it is naive to think that the Muslim crime wave now plaguing Europe will not happen here—because it already is. So Trump must continue to argue that the first step in effective anti-terrorism is strict border control and a moratorium on Muslim immigration, an argument he made in a forceful (but again, underreported) speech after the Orlando shooting. He can say

Those are winning sound bites. And, of course, Hillary Clinton and the MSM will probably play right into Trump’s hands by continuing to insist that any criticism of Islam must be motivated by bigotry—a losing position if ever there was one. 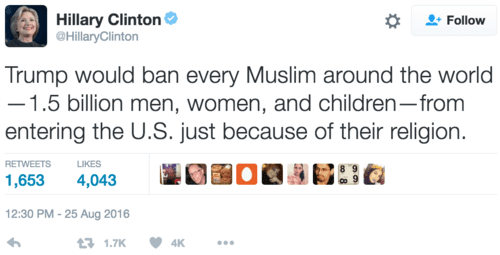 A great many whites have a strong psychological need to see themselves—or more exactly, to be seen by other whites—as people committed to the well-being of allegedly oppressed minorities.

If a candidate can be depicted as someone insensitive to minority concerns, some whites will not support him—even if they largely agree with the candidate on everything else.

Democratic strategists understand how to mine this insecurity for political advantage. That was precisely the point of Hillary’s Reno Speech. Hence the Donald Trump is a KKK sympathizer meme is more than just a talking point: it is an intimidation tactic designed to bully whites who might otherwise sympathize with Trump’s message.

For Hillary Clinton to win, she must make supporting Trump socially unacceptable. If she cannot pull that off, then she has no chance of winning.

OK, I agree that forty percent sounds a little overly optimistic. But the reason for Trump’s relative popularity with blacks appears to be his immigration hardline [Black Trump Supporter: Blacks Are Out Of Work Due To Mexican Immigration, Vote Trump”, by Jim Hoft, April 7, 2016, Gateway Pundit]

Donald Trump is in a strong position to seize the moral advantage if he hammers the Democrats over the devastating impact their immigration policies have inflicted on black Americans. How great would it be to see Trump standing before black audiences and employing the language of assault to make the case for patriotic immigration reform?

Imagine if Trump could successfully label the Democrats the “Drug Cartel Party”.[Democrats now aligned with Mexican drug cartels in hatred for Donald Trump and disdain for rule of law  by J. D. Heyes , Natural News, July 25, 2015 ] How many people would want to pull the lever for the Drug Cartel Party in November?

Such a message would surely attract a number of black voters. But it would attract even more white voters—because it would give many insecure whites the moral cover they need to support Donald Trump.

No one wants to vote for a policy that harms blacks—right?

In athletics, the successful competitor is often the one who can use his opponent’s strength against him. The same tactic often applies in political campaigns. It should rightly apply to this one.

The Clinton Campaign has indeed come out with both barrels blazing at Donald Trump. But he can easily turn their weapon against them.

If he does, he could inflict on the post-American Left a defeat from which they might never recover.