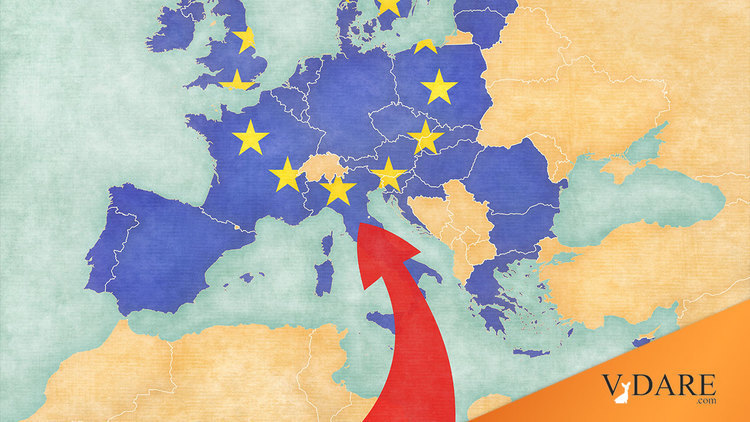 Who Really Understands The Threatened End Of Europe—Trump or Rubio?

Not content with trying to save America, Donald Trump is sounding the alarm for the rest of Western Civilization. 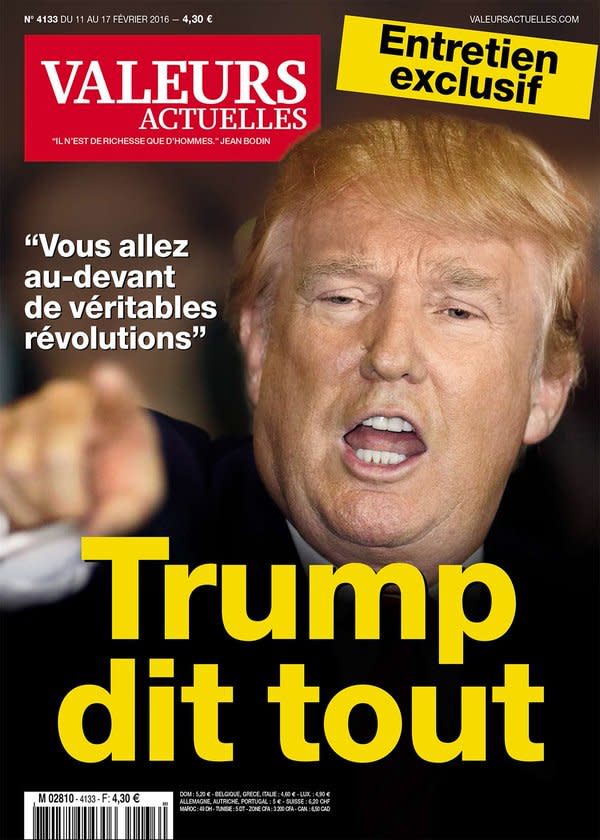 In a recent interview with the conservative French magazine Valeurs Actuelles, the Republican frontrunner predicted mass immigration from Islamic nations would lead to the “end of Europe” [Trump gets backing on ‘end of Europe’ warning, WND, February 11, 2016]. Trump also predicted nothing less than “real revolutions” if there was not a change in policy—presumably as native Europeans rise up against their own treasonous leaders. [EXCLUSIF. Trump : "La France n'est plus ce qu'elle était", by   André Bercoff, February 10, 2016]

The interview created headlines all around the world, notably in outlets like the London Daily Telegraph, Newsweek, and RT (formerly Russia Today). But despite mentions in The Blaze and WND (formerly WorldNetDaily), the Beltway Right seemed unconscious of a prediction of the imminent end of Western Civilization from the GOP’s leading contender for President.

Conservatism Inc. can’t be accused of exactly supporting Angela Merkel’s decision to flood the Continent with Muslim migrants. But so-called “elite” conservatives have given remarkably little consideration to what the long-term effects of this Islamic invasion will be. This is unforgivable when the Beltway Right is still trying to promote its preferred candidate Marco Rubio on the grounds that he’s a foreign policy “expert.”

Writing at (of course) National Review, David French claims Rubio is not a robot but actually someone who has “thought deeply about our challenge [from ‘radical Islam’] and is incredibly well-informed” [Marco Rubio is not a robot, February 12, 2016].

Stephen Hayes at The Weekly Standard is also trying to prop up Rubio by raving about his foreign policy credentials. Hayes defended Rubio’s answers to other questions in that disastrous debate in New Hampshire, specifically when Rubio said he would use “Sunni allies” to fight the Islamic State. Hayes [Email him]also recalled Rubio giving a well-received speech on foreign policy in 2012, taking questions from a well-informed audience. Interpreting the reaction of these supposed experts to Rubio, “The guy really knows his stuff,” Hayes assures us is the MSM reporters’ consensus [Rubio plays defense, February 22, 2016].

Rubio himself (or at least his handlers) obviously think re-inventing the candidate as a master of geopolitics is the way to go. Rubio unloaded on Ted Cruz for allegedly favoring cuts in defense, and accused Jeb Bush and Donald Trump of being foreign policy “neophytes” as he campaigned in South Carolina. “Negotiating a hotel deal in another country is not foreign policy experience,” Rubio sneered at Trump [Rubio Rips Into Trump and Bush as Foreign Policy Neophytes, by James Nash, Bloomberg Politics, February 11, 2016].

(What do you think the odds are that Rubio deploys that line again during tomorrow’s Republican debate? I suppose the only real question is if he uses it more than once.)

This idea of Rubio as “expert” has always been a critical part of his campaign strategy. Rubio’s very first ad boasted that he could defend the United States in the “civilizational struggle” with “radical Islamic terror.” Rubio suggested Muslim terrorists want to kill Americans because “we let girls to go school.”

Needless to say, the ad did not mention immigration.

In Iowa, the pro-Rubio political action committee “Conservative Solutions PAC” ran ads boasting their candidate was a “recognized national security expert.” (It did not answer the question, “Recognized by who?”)

Of course, as Chris Christie pointed out in their fateful exchange in the New Hampshire Republican debate, as a Senator, Rubio has never actually had to make a consequential decision that he’s had to take responsibility for. But what foreign policy choices Rubio has made during his short time in the United States Senate suggest that as President he’d be a disaster.

Rubio supported Barack Obama and Secretary of State Hillary Clinton’s intervention in Libya, which enabled the growth of the Islamic State in North Africa. [Marco Rubio on Libya and the Need for Regime Change, by Stephen F. Hayes, Weekly Standard, March 31, 2011]

Rubio also believes defeating the Islamic State (which, following the Beltway convention, he calls “ISIL”) means “defeating [Syrian President Bashar al-] Assad.” Rubio calls for setting up no-fly zones within the country, working with “Sunni allies” in the region, and opposing Russia and Iran’s efforts to “prolong Assad’s brutal regime.” He also vaguely promises “more” if he ever gets into the Oval Office [We Asked Marco Rubio to Lay Out His ISIL Strategy. Here It is. By Marco Rubio, Politico, November 19, 2016]

Needless to say, this is practically a guarantee of yet another major war in the Middle East—especially as Russia is explicitly warning that the introduction of Saudi ground forces (our most prominent “Sunni ally”) could spark World War III [Russia raises specter of interminable or ‘world war’ if Syria talks fail, by John Irish, Reuters, February 11, 2016].

But for Rubio, that may be a feature, not a bug. After all, it was the notorious Project for a New American Century that was largely credited with providing the intellectual backing for the invasion of Iraq. And building a “New American Century” is the key slogan of Rubio’s campaign.

Rubio’s “foreign policy” (which is in fact a domestic electoral policy) reveals not just recklessness and stupidity, but a larger blindness to the nature of the threat. In both Libya and Syria, the most damaging consequence of American policy was not the growth of the Islamic State, but the demographic invasion of Europe from the south.

Rubio runs ads warning that “what happened in France could happen here.” But he seems utterly oblivious to how uncontrolled immigration enables Islamic terrorists to strike within Western societies.

Rubio epitomizes the common trend among Beltway Right operatives: compensate for their cowardice with eagerness to flaunt American military power abroad. Rubio’s foreign policy promises a return to the George W. Bush years. But geopolitically, Bush’s policies were a disaster. And domestically, they tarred Republicans in the eyes of the young as the “War Party.”

What’s more, the foundation for American power, and more broadly, Western power, is crumbling before our eyes. The sweeping demographic changes in Europe are a world-historical event. The homeland of Western Civilization, for all intents and purposes, may cease to exist within our lifetimes.

What happens to NATO when countries like the United Kingdom become Islamic, or start having Islamic parties in government? What happens to American military bases in Germany if anti-American Muslims start winning democratic elections? What happens to the nuclear weapons in an Islamic France?

And, to show this isn’t just speculation: what should the American response be when a supposed NATO ally like Turkey openly threatens to use demographics as a weapon against other NATO countries? Because that’s happening as we speak [Turkey threatens to open the gates and send refugees to Europe, by Raziye Akkoc and Matthew Holehouse, Telegraph, February 11, 2016].

Trump at least seems aware of these questions. In his Valeurs Actuelles interview with the French magazine, Trump called out European nations for losing control of territories within their own borders even as they disarmed their own populations—what Sam Francis called “anarcho-tyranny.” Rather than calling for pointless confrontation with Russia, Trump believes we can work with Putin to confront common foes like the Islamic State.

Most importantly of all, Trump seems to understand demography is destiny. He says: “Unfortunately, France isn’t what it was, nor Paris.” He predicts the end of Europe unless we deal “with the situation competently and firmly” and suggests immigration must be handled in an “intelligent, rapid, and energetic matter” [Europe heading for ‘revolutions’ and ‘collapse’ over immigration, warns Donald Trump, by Henry Samuel and Ruth Sherlock, Telegraph, February 10, 2016]

Who is the real foreign policy expert? Rubio’s call for pointless interventions and reliance on allies who hate us is precisely the strategy that’s been failing since 2001 and killed thousands of Americans. In contrast, the nationalism of Trump not only promises to keep us more secure from Islamic terrorism, but it also limits the potential of getting us into a disastrous conflict with Russia.

The problem is not that neoconservatives, like those telling Rubio what to say, are just some noodle-armed, foreign policy “elite” who don’t understand real Americans.

It’s that they are either genuinely stupid people who don’t understand the real nature of the terrorist threats or simply malevolent actors who don’t care about protecting Western Civilization.

When it comes to foreign policy, Rubio is dangerous as well as foolish. Simply to survive, the West may need Trump.

Otherwise, a decade or so from now, we’ll have third-generation Kristols and Podhoretzes assuring us to vote for George P. Bush, and his strategy of recruiting “Sunni allies” in the banlieues of what used to be the French Republic.

Camp Of The SaintsDonald Trump Insurgency
<< Previous
Next >>
LATEST