Cher Compares Trump To Hitler While Hillary Looks On. The Son Of Holocaust Survivors, Father Of 9/11 Victim, Objects.

Recently, the singer Cher spoke at a fundraiser with Hillary Clinton in (where else?) Cape Cod. [She believes! Pop icon Cher joins Hillary Clinton at Cape Cod rally as her campaign continues fundraising blitz, Daily Mail, August 21, 2016] In an expletive-filled rant she called Donald Trump a "racist" for his plans to build a wall at the Mexican border, comparing him to Hitler.

“Consummate liar, doesn’t care who she hurts, insane and, you know, sociopathic narcissist,” she said. “I just wish he’d fall off the face of the earth.”

Veering into more incendiary territory, Cher invoked “old despots” and received a subdued response when she mentioned Hitler and Stalin.

“We’re going to make Germany great again,” she said, before digressing to a bit on Britain’s vote to leave the European Union.

[Raising Money For Clinton, Cher Sounds Off (And Not Just About Trump), By Jonathan Martin, August 23, 2016]

Clinton did not demur, but as the son of Holocaust survivors, and the father of a 9/11 victim, I find this profoundly outrageous.

Hundreds of terror attacks have killed thousands, and tens of thousands have been killed, raped or otherwise violently attacked by individual illegal aliens as a direct result of our failed borders. Yet Cher labels Trump a Hitler and racist because he wants to secure our borders to keep out such killers.

My own family provides a perfect example of how an earlier president—Franklin D. Roosevelt, a Democrat—recognized the absolute necessity for the careful screening of immigrants arriving from areas controlled by our enemies; and also the inevitable disaster that resulted when, beginning with Jimmy Carter, presidents of both parties failed to secure our borders to exclude illegal aliens.

My parents were both German, born in 1906 and 1911. My mother was Protestant, my father Jewish.

Having both been openly anti-Nazi and foreseeing the Nazified future of Germany, they fled to France in the 1930s where, in violation of Nazi race laws, they committed the ultimate expression of contempt for Hitler by marrying.

When the Germans invaded and conquered France in 1940, they again fled. They had agreed that, if separated by events, they would each attempt to reach safe haven in a foreign country.

Separation was in fact forced on them. My mother hid in southern France for the duration of the war with the help of a member of the French Underground. Meanwhile, after a harrowing, nearly miraculous escape through Spain and Portugal, my father reached the USA in April 1941.

This was a man who had a German passport in which the Nazi government had stamped a large red "J" for Jew; they added as his middle name, as they did for all Jews, the name "Israel."

Yet, on his arrival he was immediately taken into custody by the Immigration Service as a possible Nazi agent. He was held for a week and very carefully interrogated—one of his cross-examiners being a German-born Jewish psychiatrist. Only when his examiners were satisfied was he released.

Describing his experience years later he told me that they “practically looked under my fillings to see if I was a German agent.'’

I asked him if, as a legitimate refugee in fear for his life, he was offended by this treatment.

His response was a vigorous "No! I was glad. I didn't want Nazis in the US any more than did FDR. I wanted to be safe."

And his family was safe—until 19 illegal aliens murdered his grandson, my son, and 2995 others on 9/11 thanks to the failure of presidents of both parties, influenced by the likes of Cher who say border control is "racist."

This woman. Obviously very poorly educated, obviously has no real understanding of the history of Hitler's rise, or the nature of "Fuhrerprinzip," (leader principle), under which every last aspect of Germany and its people were subject to the absolute control of the Fuhrer acting through the Nazi Party: the world view of its people, its schools, its industry, its banks, its agriculture, its religion, its art, its architecture, its political structure, even family relationships; and of course its military.

Also, what had formerly been a governmental system in which powers were diffused among the German federal government and the various German States (Prussia, Bavaria, etc.) became one in which every bureaucracy and political office, down to the smallest locality and lowliest officer were controlled absolutely by Hitler through his Party.

To me—I believe I am entitled to be paranoid—that centralization of power away from the German States and imposition of a single 'correct' way of thought ominously resembles the Democratic Party's drive for more central control by federal judges and bureaucrats of policies that rightly belong in the hands of local and state elected officials. And the Democrats' Cultural Marxist demonization of those not adhering to Politically Correct thought is so reminiscent of the Hitlerian goals that it should be obvious even to an airhead like Cher. 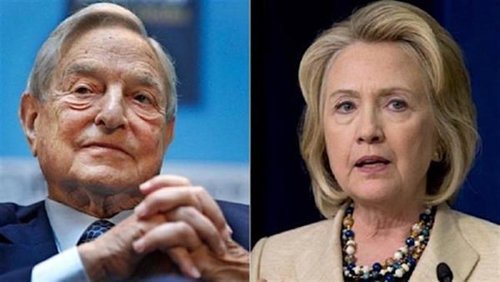 The passage of time has removed from our presence all but a few of those who implemented the Nazi repression. There is one left, however—who is also a major supporter of the Democratic Party, and Hillary.

That is of course George Soros. Although born a Jew in Hungary he admitted in a 60 Minutes interview [December 20, 1998] that he collaborated with the Nazis in his native Hungary in confiscating Jewish property. He stated that he feels no remorse.

Soros continues his campaign against human decency by spending millions to undermine Israel, support its enemies, and open the borders of Europe and America to millions of unscreened migrants. So of course he is the perfect political bedfellow of the Democratic Clinton-Kaine ticket, right in there with the gay-hating Saudis who've paid millions to the Clinton coffers.

Cher, apparently too ignorant to realize it, has joined forces with the very people who espouse the causes she claims to despise.

Formerly a songbird, she has morphed into a parrot for Hillary.

Peter Gadiel (email him) is president of 9/11 Families for a Secure America Foundation. His son, 9/11 World Trade Center victim James Gadiel (North Tower, 103rd floor), was 23 at the time of his murder.