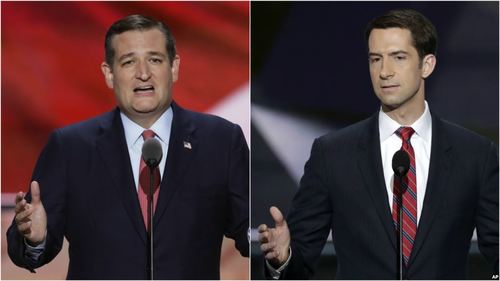 Establishment Republicans are squandering their final opportunity to pass America First legislation during the lame-duck session. Instead, their focus is entirely on the worn-out priorities of, you guessed it, Establishment Republicans. But this session may also give the first clues about who will pick up the immigration patriot baton in the race to succeed Trump.

Last week, The Watcher outlined multiple patriotic immigration proposals for Congressional Republicans to fight for during the lame-duck session. But they are apparently refusing to fight on anything America First except for wall funding and are even trying to increase immigration.

Senator Thom Tillis and a few other Republicans have proposed a “bipartisan” immigration measure that would dramatically increase seasonal guest worker visas. Of course, increasing immigration is the complete opposite of President Trump’s agenda, yet here are Republicans pushing their donors’ interests instead of their voters’. [Lawmakers strike deal to double number of guest worker visas, by Stephen Dinan, The Washington Times, November 26, 2018]

The Tillis plan would expand the number of H-2B visas granted every year from 66,000 to 132,000. The only “restriction” in the measure is that the legislation would require employers to do more to ensure that everyone they have hired since 2012 is not an illegal immigrant.

Tillis’s argument for the proposal is the Business Uber Alles mentality that Trump defeated in the 2016 Republican primary.

“Sen. Tillis has been working with his colleagues on ways to ensure America’s small businesses have the temporary, legal workers they need to sustain their business while also making sure there are integrity and accountability measures in place to protect American workers and promote a legal workforce,” Tillis spokesman Daniel Keylin [Tweet him] told The Washington Times. “There is broad bipartisan consensus in support of seasonal small businesses and the American workers they employ, and progress is being made on a fair compromise.”

The obvious, best way to protect American workers would be to reduce the number of guest worker visas, not double them. (Plus, of course closing the Birthright Citizenship loophole to make sure guest workers don’t make themselves permanent by having anchor babies.) But corporate America—which is currently happily censoring conservative speech, reneging on VDARE.com conference contracts, and subsidizing the Left—wants its cheap labor and Republicans once again serve as its eager enablers.

Tillis has long been a squish when it comes to immigration (see The “SUCCEED Act”—The Latest Republican Amnesty Plan, Brought To You By GOP Senators Tillis, Lankford And Hatch  and NC's Senator Thom Tilli$$$$ Puts Cheap Labor Lobby Donors Ahead Of Americans On H-2B Visas). What’s disappointing is that Senator Chuck Grassley, who’s much better on the issue than the average Business First Republican, is one of the architects of the legislation.

And sadly, the guest worker proposal is just one of many disappointments GOP leaders have brought forth during the lame-duck session.

At the forefront of Republican priorities: “criminal justice reform,” an idea promoted entirely with the foolish hope of attracting black voters in mind. The First Step Act would reduce mandatory minimums for many drug offenders and reduce legal penalties for committing a crime with a firearm. The bill rolls back many of the measures that helped America reduce crime since the anarchic 1970s and 80s. The act has the backing of Trump (allegedly because of Javanka’s disastrous influence) and that of many Republican senators who see it as a terrific bipartisan idea—but it clearly doesn’t uphold the Law and Order vision Trump articulated on the campaign trail. [Criminal justice reform leaves Mitch McConnell caught between Trump and a hard place, by Jon Ward and Hunter Walker, Yahoo! News, November 28, 2018]

Fortunately, this idea appears to be stalling in the Senate thanks to the efforts of Sen. Tom Cotton, who has pointed out the bill may give an early release to hundreds of sex offenders. [What’s Really in Congress’s Justice-Reform Bill, by Tom Cotton, National Review, November 26, 2018]

In the House, GOP leadership is avoiding patriotic immigration to focus on…wait for it…tax cuts! Even though the massive tax reform package did nothing to help Republicans in the midterms, Rep. Kevin Brady has released another plan that the Trump base did not ask for. Unlike criminal justice reform, Democrats show no interest in Brady’s new tax plan and it’s unlikely a sufficient number of them will support the bill to get it through the Senate. [Dems criticize Brady's new tax package, by Naomi Jagoda, The Hill, November 27, 2018]

Both criminal justice reform and the tax plan will require all the political capital Republicans can muster in the lame-duck. Of course, it would be better if the GOP spent this capital on patriotic immigration reform, but that’s too much to ask of the party’s deluded leaders. They have their own priorities, and they’re not that of Trump’s base.

Establishment Republicans are not just disappointing in Congress—they’re also failing the base in the administration. Secretary of State Mike Pompeo announced this week he had hired Wall Street Journal columnist Mary Kissel as a senior policy adviser. Kissel is a Never Trumper who’s on record criticizing nearly every aspect of the Trump agenda, especially immigration. The president had even called her a “major loser” due to her excessive criticism. Yet, she’s now directing policy for one of the most important government agencies. [Pompeo Hires Never Trumper Mary Kissel as Senior Policy Adviser, by Kristina Wong, Breitbart News, November 28, 2018]

All of these disappointments show that Trump, or perhaps more accurately the Trump phenomenon, still has not yet transformed his party enough. Republicans are adopting Trumpian rhetoric when it comes time to appeal to voters, and that’s something. But they are still reverting to Business Uber Alles when it’s time to draft legislation.

Now for the good news. Republicans have fortunately not abandoned the fight for wall funding in the must-pass spending bill. They’re only demanding $5 billion—not the full amount—but it is substantially better than the paltry $1.6 billion previously allocated. Democrats aren’t budging, but that may change if Republicans force a government shutdown. Whether the stupid party will do that remains to be seen. [House GOP presses Democrats to get behind Trump's border wall, CBS News, November 28, 2018]

The other good news: there is a strong possibility the guest worker plan will die before it reaches passage. Senator Cotton has already shown his willingness to buck his party leadership in stifling criminal justice reform, he can add to his solid immigration credentials by killing Tillis’s sellout of American workers.

So could Ted Cruz. Earlier this year, Cruz stood up against Trump’s bad deal on Deferred Action for Childhood Arrivals, helping derail the plan’s chances of passage. Cotton and/or Cruz would instantly make themselves heroes to Trump’s base and show their commitment to immigration patriotism if they strangle the guest worker increase. Both of them have their eyes on succeeding Trump. There’s no better way to highlight that possibility than to move to Trump’s right on the immigration issue.

Whatever happens, the guest worker bill must not pass, and Trump must get the $5 billion for the wall. Everything else is just Beltway Right noise.