Cuckservatives, Including Newt Gingrich, Call Retreat After Dallas. Will Trump?

The bodies were barely cold in Dallas when leading cuckservatives were already rushing to triangulate between the hate group Black Lives Matter and the American policemen struggling to contain a low-level insurgency. To those familiar with The Stupid Party and Conservatism Inc., no such display of cowardice could be surprising. But will Donald Trump follow, either by caving himself—or by picking a cuck-compromised figure like Newt Gingrich as his Vice President?

Trump’s initial reaction after the shootings in Dallas was sound. Hours before Hillary Clinton responded, Trump offered “prayers and condolences” to “all of the families” “devastated by the horrors we are all watching take place in our country.” In a longer response posted to his Facebook page, Trump called for the restoration of “law and order” and decried the worsening of racial tensions. He also called for “strong leadership, love, and compassion.” Especially given that many European-Americans voted for Barack Obama because they thought he would heal the racial divide, this is a sober and highly appropriate response.

In contrast, Hillary Clinton tossed off a tweet a few hours later saying she mourned for police officers who had a “sacred duty to protect peaceful protesters.”

I mourn for the officers shot while doing their sacred duty to protect peaceful protesters, for their families & all who serve with them. -H

Even in the immediate aftermath of the shooting, this was a kind of passive aggressive critique of the police—essentially saying the loss of life was tragic because cops were needed to “protect” the Black Lives Matter activists protesting them. Protect from who?

That same day, as the Narrative already had begun to shift, Hillary pinned the blame on whites for the violence, saying

White Americans need to do a better job of listening when African Americans talk about the seen and unseen barriers you face every day.

Of course, back in reality, as political harassment causes policing to be formally or informally withdrawn, African-Americans are being increasingly victimized by violent crimes at the hands of other African-Americans:

Under intense pressure, the Chicago police cut their pedestrian stops by 90 percent and murders are up 60 percent. When the Baltimore police virtually stopped making drug arrests after the Freddie Gray riots, murders shot up by 63 percent. They are up 54 percent in Washington, DC, and 65 percent in Milwaukee. If no blacks at all are arrested there will be no appearance of bias. Is that what Mr. Obama wants? [The Dallas Killings Were Inevitable, American Renaissance, July 8, 2016]. 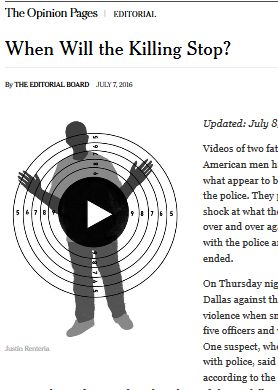 Not surprisingly, resistance to law enforcement officers is also increasing, as criminals feel emboldened to not obey orders. Ominously, officers report mobs are gathering when they try to detain someone who is breaking the law. The Main Stream Media is cheerleading this frenzy, which will almost certainly lead to further violence before the summer is over.

Unfortunately, it is simply not clear that the black community as a whole has the will or character to resist this death spiral, regardless of the fact that blacks themselves are the first victims.

Some commentators on the Right have identified the obvious and condemned the Left and the MSM’s campaign of incitement. Rush Limbaugh featured Heather Mac Donald prominently on a recent show and gave her a great deal of time to explain the obvious lies underlying the Black Lives Matter campaign.

But other conservatives have already begun giving aid and comfort to this burgeoning terrorist campaign against police and European-Americans. Useless goober Matt Lewis [Email him]always eager to curry favor with his Leftist friends, picked this moment to virtue signal as a Woke White Man coming to terms with his own privilege.

In the era of Facebook Live and smart phones, it’s hard to come to any conclusion other than the fact that police brutality toward African-Americans is a pervasive problem that has been going on for generations. Seriously, absent video proof, how many innocent African-Americans have been beaten or killed over the last hundred years by the police—with little or no media coverage or scrutiny?

I was brought up to reflexively believe the police. To give them the benefit of the doubt. This was before everyone had a camera—and before my own personal experience would demonstrate to me that not all cops are heroes (though some certainly are).

As a reward (no doubt eagerly anticipated), Lewis then got to appear on National Public Radio to discuss how “smartphones” and regular recording of incidents have changed views of police. [Matt Lewis: Smartphone Era Challenges Americans’ Established Perceptions On Race and Policing, July 10, 2016]

But of course Lewis has it precisely backwards. In the last few years, smartphones and video camera footage have actually provided a truthful perspective on events which otherwise would have been misrepresented or completely disappeared by the MSM. Millions of Americans around the country have witnessed black mobs causing chaos at fast food restaurants, concerts, and other public spaces, often interspersed with feral cries of “World Star!” (WorldStarHipHop is a website that ostensibly features rap videos but more often features black Americans videotaping their own violent acts.)

For example, the “Epic Beard Man” case of several years ago would undoubtedly have been presented as a “racist” assault by a white man on an innocent African-American were it not for the existence of a video proving the black man started the fight.

Similarly, the “Knockout Game” is another viral phenomenon that the MSM tries to deny but which millions of Americans know is real because they’ve seen it.

“Smartphone” culture has provided the MSM with material for various coordinated campaigns designed to incite black hostility against whites. But as we’ve seen in so many cases, once further citizen reporting reveals the facts behind each case, Narrative Collapse sets in and the morality play of “innocent blacks victimized by racist whites” falls apart. Sometimes, as in the George Zimmerman case, it even turns out a white guy wasn’t involved at all.

But if the MSM can control the information that is released, it can keep the original Narrative of white guilt going. Thus, in the eyes of the MSM, releasing information which undermines the myth of black victimization is far more immoral than inciting murder against police officers.

Thus when Matt Drudge made the obvious connection between Black Lives Matter and the murders in Dallas, Slate showed far more anger towards Drudge then it did at the murders themselves. Isaac Chotiner, one of the typical Cultural Marxist writers who functions in a state  of shrieking hysteria, screeched, “The Drudge Report,  a highly-trafficked sewer of right-wing racism and hate, led its hate with the despicable headline  “Black Lives Kill”. [Racist responses to tragedies like Dallas do more than stoke hatred, they rob us of our ability to grieve, July 8, 2016]

But what is truly remarkable is how David French, the man Bill Kristol floated as the “true conservative” alternative to Trump, bought the exact same premise. “I just deleted my Drudge app,” he preened. His action was seized on by “conservatives” who are far more concerned about the threat of Donald Trump than violence against police officers. [After Dallas, conservatives rebel against the Drudge Report, by Oliver Darcy, Business Insider, July 10, 2016]

French, practically a cuckservative icon, is surprising no one with his actions. Of more concern is Newt Gingrich, still (apparently) one of the leading candidates to be Donald Trump’s Vice President.

Gingrich commented just after the shooting:

“It took me a long time, and a number of people talking to me through the years to get a sense of this. If you are a normal white American, the truth is you don’t understand being black in America and you instinctively under-estimate the level of discrimination and the level of additional risk.”

This is obscene. “Normal white Americans,” to use Gingrich’s phrase, also deal with “additional risk” simply by being around blacks. The desire to escape disproportionately high levels of black crime—levels which are now increasing again—is  the dominant factor determining settlement patterns within the United States. 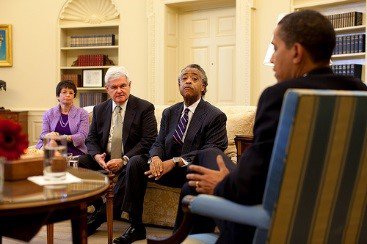 And even as Gingrich and his fellow cuckservatives posture to win leftist favor, white Americans are being gunned down by Black Lives Matter supporters, with little sympathy or even recognition from the same reporters and activists shrieking for more concessions from the besieged Historic American Nation.

Americans should have the right to live free from fear in functioning communities that aren’t plagued by thugs and murderers egged on by a sociopathic media and Political Class.

What is needed is a leader who will resist this campaign of intimidation.

Americans who are tired of Black Lives Matter’s thuggery and outraged at the collapse of our cities are looking to Trump to be that leader.

Let’s hope he avoids Gingrich after these latest disqualifying comments.