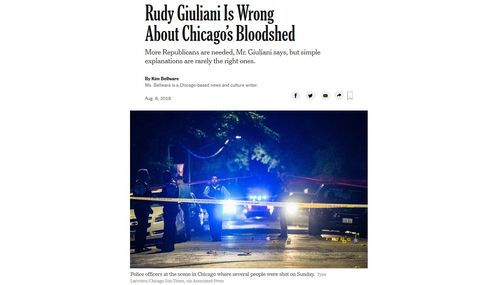 More Republicans are needed, Mr. Giuliani says, but simple explanations are rarely the right ones.

By Kim Bellware
Ms. Bellware is a Chicago-based news and culture writer.

CHICAGO — Sixty-six people were shot in Chicago from early Friday evening to early Monday morning, 12 of them fatally. …

… But they’re familiar to any Chicagoan who has seen the city’s trauma make national headlines: The complexities of the gun-violence affliction get flattened and distorted to fit into the contours of a simplified, politically convenient argument. …

… As the statistical adage goes, correlation does not imply causation. The verdict from mainstream sociologists and criminologists alike is that there is a clear and obvious reason for neither the widespread decades-long decline in violent crime

One major cause is pretty obvious: liberals stopped being in charge of criminal justice.

nor its recent spike in big cities like Chicago.

Actually, as I pointed out in March 2016, the 2016 spike in Chicago (+58% vs. 2015 ) is one of the clearest cases of cause and effect in the social sciences: liberals, such as the ACLU, retook control of the criminal justice system in Chicago in the weeks following the release of video showing a Chicago cop shooting Laquan McDonald in the back.

But we can track what happened in Chicago much more precisely:

Still, the specific forces behind the spikes and dips have vexed both independent observers and public servants honest about how unwieldy and multilayered the roots of violence are. A popular but unproven answer is the “Ferguson effect” (or in Chicago, the “Laquan McDonald effect”), which maintains that police officers are being undermined and unfairly maligned by politicians and the public and in response are retreating from proactive policing.

The “let cops be cops” solution — most recently peddled on “Fox & Friends” in light of the bloody weekend — feeds the delusion that police officers themselves can actually control crime, that the causes of and prescriptions for plagues like gun violence are untied to socioeconomic factors.

Because socioeconomic factors in Chicago changed radically between November 2015 and January 2016.