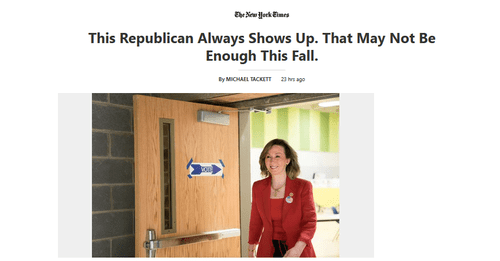 Last month, I wrote an article for VDARE on the VA-10 Congressional race. Current Rep. Barbara Comstock did indeed survive a tough GOP primary race against Shak Hill, who ran on a Trump-like platform that focused on crime, sanctuary cities and amnesty. But the fact that the incumbent lost around 40% of the vote in the primary indicates that Trump Republicans see her—correctly – as a RINO not to be trusted. Even worse for Comstock – and for all establishment Republicans in demographically changing districts – non-white voters are not voting for her despite non-stop pandering.

The New York Times has taken note of this. Thought they merely hinted at the demographic shifts in VA-10 caused entirely by replacement immigration (which Comstock supports) they did note her relentless efforts to court non-white voters has largely been in vain. The article, titled, “This Republican Always Shows Up. That May Not Be Enough This Fall” begins:

“Representative Barbara Comstock consistently attends Eid festivals at the Adams Center, one of the largest mosques in the United States. When a young Muslim earns his Eagle Scout Award, she is there reliably, bearing an American flag as a gift.

The same has been true at Diwali, India’s festival of lights, at Korean National Day and Pakistan Day. In the diverse Washington, D.C., suburbs that make up a large swath of Virginia’s 10th Congressional District, Ms. Comstock is known for one trait: She shows up.”

Well, she shows up if it is the attendees are the right color. She has never attended a local Sons of Confederate Veterans meeting. And, remarkably enough for someone who always shows up, she couldn’t find the time to attend a recent Republican meeting where Senate candidate and Trump Republican Corey Stewart was speaking.

As noted last month, Democrats see VA-10 as a chance to take a seat that has been in Republican hands since the Reagan Revolution of 1980 (conservative Frank Wolf held the seat for 34 years). A formerly rural, conservative, Southern district, the traditional residents of VA-10 have not suddenly embraced the values of SJWs, Antifa and leftist college professors. Instead they are having those values forced upon them by mass immigration of people who vote their race and who will never vote Republican.

The only poll taken so far has Comstock losing to Democrat nominee Jennifer Wexton by 10 points. Wexton leads among black, Hispanic, and Asian voters regardless of education level by 62% to 21%. Ironically, the never-Trumper Comstock may well do worse among minorities than Trump did in 2016.

“If Ms. Comstock loses, it will not be out of complacency. On Saturday, her 59th birthday, her schedule included stops at an Indian-American community event and a Bangladeshi-American soccer tournament.

Most of her targets appear to remain unimpressed:

“’For the Korean-American events, sometimes, she will come and she usually has a canned statement,” said Grace Wolf Cunningham, a Democrat and Korean-American on the Herndon Town Council. ‘I think that she is very good at making that token show of support for the community, but personally, I haven’t seen her show any substance.  ‘Maybe for some people, showing is good enough,’ she said. ‘People are wising up.’”

People are indeed wising up. This includes whites, who are slowly waking up to the realities of identity politics and may want to play so