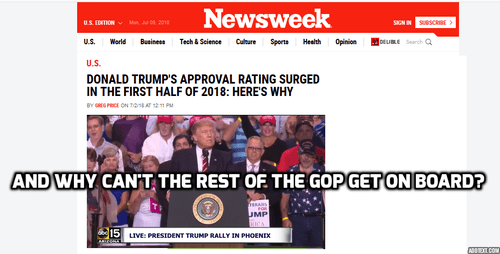 VDARE Radio: Why Doesn’t The GOP Leadership Get It On Immigration?

They have learned nothing from 2016. The Republican leadership still won’t do anything productive on immigration, even as the issue becomes more important than ever.

The most recent attempt by the Republicans to address immigration was the so-called “compromise bill” that just went down to an embarrassing defeat by a margin of 301 to 121. This occurred despite President Trump’s endorsement, although an admittedly lackluster one [Immigration storm bears down on Republicans, by Rachel Bade, Politico, July 2, 2018].

The president is now trying to say he never told Republicans to back this bill, even though you can still find the tweet proving he did [Trump says he didn’t tell Republicans to back an immigration bill. He definitely did. By Emily Stewart, Vox, July 1, 2018]. The real message here is that the president didn’t really support this bill to begin with, but was told by his advisors that he had to.

Obviously, what America really needs is a complete immigration moratorium. But even if that is too much to ask, the first so-called Goodlatte bill, which was significantly better than the so-called “compromise” bill and contained provisions for mandatory E-Verify, actually won more votes in the House, gaining support from 193 Republicans [House rejects Rep. Bob Goodlatte’s latest immigration bills, ignoring Trump, by Alan Fram and Lisa Mascaro, The Roanoke Times, June 27, 2018]. If President Trump had backed that bill it may have passed. The fact his advisors seem to not know this is remarkable.

Clearly, Republicans have decided to simply punt on the issue until the midterm elections and hope that they will somehow increase their majority. This is a dangerous gamble. More importantly, events may force them to take action, even if they don’t want to. The victory of Andres Manuel Lopez Obrador, AMLO, suggests Mexico is likely to be even less cooperative when it comes to stopping Central American migrants [Mexico’s leftist Lopez Obrador wins largest landslide in country’s recent history, by Harriet Alexander, The Telegraph, July 2, 2018] If AMLO fails and Mexico collapses, there could also be another rush to the border from Mexico.

The key problem—grassroots Republicans are clearly with President Trump but the leadership of the conservative movement is not. Recent polls suggest better than 85 percent of Republicans support President Trump, with some polls showing as high as 90 percent of Republicans [Donald Trump’s Approval Rating Surged In The First Half of 2018: Here’s Why by Greg Price, Newsweek, July 2, 2018]. Yet there hasn’t been a change in the Beltway Right. The Heritage Foundation, National Review, Americans for Prosperity, and all the rest of the nonprofits haven’t adjusted to a nationalist agenda. They support the president personally; they have no choice. But there hasn’t been any real thought about what a nationalist agenda would look like for America.

So even with united Republican government, there’s been one policy failure after another, with the exception of tax reform. When the Republicans finally retook the government, it turned out they had no specific plan to repeal and replace Obamacare. There’s been no real rethinking about America’s foreign policy. President Trump’s America First trade agenda is already receiving significant pushback from traditional Republican groups like the Chamber of Commerce [U.S. Chamber of Commerce launching campaign opposing Trump’s tariffs, by Rebecca Morin, Politico, July 2, 2018]. And it turns out there isn’t much of a plan on immigration.

Of course, at VDARE.com, we are not really surprised by this. It seems that Conservatism Inc.’s approach to immigration is to simply pretend the problem doesn’t exist. After all, if you talk seriously about immigration and its consequences, you get attacked in the media and protested at your events. So the Beltway Right is just closing its eyes to what is happening to the country. And as a result, even though President Trump literally won the election on immigration issues, it is almost like he is isolated from the party he ostensibly leads.

The solution has to come from President Trump himself. He can push for smaller bills such as mandatory E-Verify or a remittance tax to pay for the border wall. Unfortunately, he hasn’t done anything like this thus far. But recent events like the election in Mexico may force his hand. And if President Trump can bestir himself and forcefully lead, the GOP going into the midterm elections will have no choice but to follow.