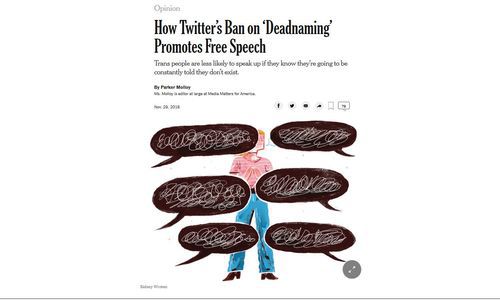 From the New York Times opinion page, with an amusingly Orwellian headline:

Trans people are less likely to speak up if they know they’re going to be constantly told they don’t exist.

By Parker Molloy, Nov. 29, 2018
Ms. Molloy is editor at large at Media Matters for America.

… In September, Twitter announced changes to its “hateful conduct” policy, violations of which can get users temporarily or permanently barred from the site. …

“We prohibit targeting individuals with repeated slurs, tropes or other content that intends to dehumanize, degrade or reinforce negative or harmful stereotypes about a protected category. This includes targeted misgendering or deadnaming of transgender individuals.”

So, tweeting “Bruce Jenner fathered six children, including Kendall and Kylie Jenner, after being the most celebrated male athlete at the 1976 Summer Olympics” is now Hate Speech on Twitter.

… To trans people, it represented a recognition that our identity is an accepted fact and that to suggest otherwise is a slur. But to many on the right, it reeked of censorship and “political correctness.”

Twitter is already putting the policy into effect. Last week, it booted Meghan Murphy, a Canadian feminist who runs the website Feminist Current. Ms. Murphy hasn’t exactly supported trans people — especially trans women. She regularly calls trans women “he” and “him,” as she did referring to the journalist and trans woman Shon Faye in a 2017 article. In the run-up to her suspension, Ms. Murphy tweeted that “men aren’t women.”

As a transgender woman, I find it degrading to be constantly reminded that I am trans and that large segments of the population will forever see me as a delusional freak.