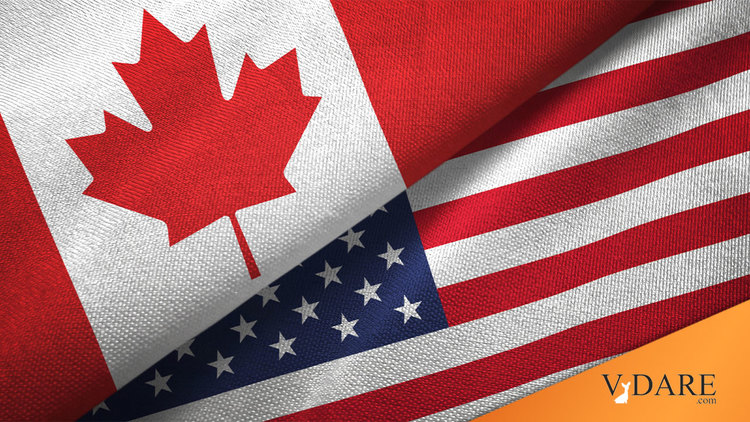 In both Canada and the U.S., anti-System sentiment is unmistakably rising among the very people the System depends on. In the ongoing Canadian trucker protest, the Left’s hysterical reaction shows that it is not just neurotic but also totalitarian [Canada Live Updates: Ending Protest Requires More Police, Ottawa Chief Says, New York Times, February 7, 2022]. In the U.S., there are open shows of contempt by U.S. Border Patrol agents aimed at their own superiors. The future of the English-speaking world may depend on what actual workers and frontline military and law enforcement decide to do when they are given unjust orders from corrupt and hostile Regimes.

The trucker strike in Canada is remarkable not just because of the courage showed by the individual truckers, but because of the massive hatred directed against them by the Regime and its media in Canada and the U.S. Perhaps the most sympathetic voice in the U.S. mainstream was Canadian journalist Jonathan Kay in the Washington Post and even he felt obliged to triangulate against the protest, dismissing it as a “stunt.” Nonetheless, he correctly noted how utterly unrepresented these people are in an ostensibly democratic country:

What’s worse (from a conservative’s point of view), the situation in Canada is fundamentally asymmetrical: While conservative populist sentiment is largely taboo within Canadian institutional politics and mainstream media, radicalized liberal dogmas are not only tolerated but performatively embraced

[Canada’s truck convoy is just a stunt in a country where populism is still taboo, February 7, 2022]

Canadian Prime Minister Justin Trudeau illustrated this when he bizarrely alluded to his own support for Black Lives Matter protests while denouncing the truckers in extreme terms [Freedom Convoy: Trudeau calls trucker protest an ‘insult to truth,’ BBC, February 1, 2022].

As Kay put it:

In recent years especially, Canadians have been greeted by the spectacle of Trudeau, a serial blackface enthusiast in days of yore, taking a knee to Black Lives Matter and denouncing his own country as a genocide state… And in 2020, when a mob tore down a statue of Canada’s first prime minister, Trudeau and other Canadian liberal leaders stared silently at their feet, a fact not lost on the truckers now being excoriated for every stray act of rudeness in Ottawa. You don’t have to be a trucker, or even a vaccine mandate opponent, to see this double standard as hypocritical [links in original].

Of course, patriots in America who assumed the rules had changed following 2020’s massive BLM protests learned that law enforcement can be suddenly draconian when the wrong side takes to the streets. Now Canadians are getting the same lesson. Truckers aren’t just being denounced by the Prime Minister, but even compared to revolutionaries by the Leftist NDP party and its leader Jagmeet Singh, the child of Sikh immigrants [Canada’s NDP leaders says trucker convoy aims to ‘overthrow’ gov’t, Al Jazeera, February 7, 2022]. While Trudeau has ruled out using the military against the truckers, he has also dismissed negotiations and said the standoff “has to stop” [‘It has to stop’: Trudeau accuses protesters of blockading ‘democracy’ during Commons debate, by Nick Boisvert and Peter Zimonjic, CBC, February 7, 2022].

This leaves the police, but police say they don’t have the manpower required, and even moving the trucks will be hard [Removing trucks could be almost ‘impossible,’ say heavy towing experts, by Michelle Allan, CBC, February 7, 2022]. It's going to be especially difficult when even CNN reports that protests are spreading [Crowds of demonstrators join rallies across Canada as COVID-19 trucker protests spread, by Paula Newton, CNN, February 7, 2022].

A showdown seems inevitable, which means it will ultimately come down to whether police and/or military will clear the streets. It will be interesting to see whether these forces will be as squeamish as the U.S. military was about stopping Black Lives Matter riots nationwide in 2020 [Top US general rejected Trump suggestions military should ‘crack skulls’ during protests last year, new book claims, by Zachary Cohen, CNN, June 24, 2021].

Ottawa police are already talking about “tracking” supporters and protesters:

"We have increased ability to identify and target protesters and supporters of protesters," Ottawa police say, adding that they're gathering "financial, digital, vehicle registration, driver ID" & more. "Our goal is to end the demonstration." pic.twitter.com/DqpZPbabsO

So I doubt there will be much hesitation.

The trucker protest may have remained the Canadian issue that the U.S. Regime Media tried to confine it to were it not for GoFundMe [Tweet them]. The fundraising platform not only stopped people from donating to the cause but even said it would redistribute funds to other groups unless donors specifically asked for a refund. Needless to say, GoFundMe used no such tactics when serving as a platform for the CHAZ/CHOP anarchist occupation in Seattle [GoFundMe, now nixing Canadian trucker fundraiser, promoted Capital Hill Occupied Protest appeal, by Adam Shaw, Fox News, February 6, 2022].

The fundraiser for the truckers is still shut down, but donors will at least get their money back. Of course, that only happened after Florida (and others, including my home state of West Virginia) threatened a fraud investigation [GoFundMe backtracks on redistributing money for Canadian truckers, under threat of fraud investigation, by Timothy Nerozzi, Fox Business, February 6, 2022]. But if these states were governed by Democrats, communist charities would presumably be getting donations originally intended for patriot truckers.

For immigration patriots, the classic case of anarcho-tyranny and the selective rule of law is America’s non-enforcement of immigration laws. Even during the pandemic, even in the midst of COVID-19 scaremongering, the Biden Administration continued its mysterious flights of illegal immigrants into the United States [Biden Encourages Massive Illegal Immigration and Tries To Hide It With Secret Flights, by Lora Ries, Heritage, January 31, 2022]. The Border Patrol itself has been reduced to a “concierge service” for illegal immigrants, with our law enforcement professionals essentially serving the goals of cartels and human smugglers [Border patrol ‘working with cartels,’ to handle overwhelming migrant crossings: Former official, by Angie Wong, New York Post, February 6, 2022].

But recently Secretary of Homeland Security Alejandro Mayorkas spoke to Border Patrol agents and received an outright defiant response. One agent reportedly turned his back to the DHS Secretary, to which Mayorkas reportedly responded that though they could turn his back on him, he would never turn his back on them [Border Patrol agents confront Homeland Security secretary in contentious meeting, by Erin Doherty, Axios, February 1, 2022].

But the secretary’s rhetoric doesn’t change the fact that he’s already turned his back on the Border Patrol through his actions. The most recent figures show that the monthly number of people encountered by the Border Patrol has been increasing to over 180,000 per month. Illegal aliens also want to be detained so they can be released into the country, one of the specific charges Border Patrol agents made against the DHS Secretary [Migrants with criminal records among those being released in the US: ICE Agent, by Callie Peterson, Carl Campanille, and Bruce Golding, New York Post, January 27, 2022].

CNN, hardly a pro-border enforcement outlet, admitted that agents’ comments “were part of a wave of frustration expressed by an often-politicized workforce tasked with securing the border amid an increase in unlawful crossings and a lingering pandemic” [Leaked audio and video show Border Patrol agents confronting Homeland Security secretary at meetings, by Geneva Sands, February 1, 2022].

Ultimately, it comes back to the National Question. Throughout the Anglosphere, we are ruled by an elite that views rural voters, conservatives, and whites not just as political opponents but domestic enemies or insurgents.  Meanwhile, non-citizens seem to have more rights than conservative Americans.

Canadian conservatives face the same situation. When we look at our rulers in Washington or Ottawa, it is difficult to believe that we are really part of the same people, share the same values, or should have a common destiny.

It's too early to say what this will lead to in the long run. For all we know, the Potomac Regime could provoke war with Russia soon.

Yet I see long-standing divisions persisting beyond the pandemic, and even a Wag-The-Dog war. Questions about Covid-19, deplatforming, and even immigration are no longer just about those issues. There’s something greater building.

Both North American polities seem to be fragmenting from within. Western Canada seems to have more in common with Red State America than it does with Ottawa. Not a few are noticing that support for the caravan is coming from Western separatist movements, not the mainstream federal Conservative party. An official from the pro-Alberta sovereignty Maverick Party, Tamara Lich, was instrumental in organizing the movement. She recently quit the party for reasons that are not clear [$9.8M lawsuit targets convoy leaders after GoFundMe cuts off 10M fund; Tamara Lich quits Maverick Party, by David Climenhaga, Rabble, February 7, 2022].

The Canadian truckers themselves seem poised to face the kind of lawfare that substantially squelched the nascent Alt Right in the U.S. Border Patrol agents remain suppressed by the Biden Administration, smuggling out reports to media allies in order to create pressure from the outside.

What unites both these issues is that loyalty, identity, and even legality have all become subjective. The written rules no longer matter; only power is left.

Will dissidents in North America tolerate state repression when they see criminal movements from the Left not just indulged but endorsed?

If the “Alt Right” has been mugged, what has emerged from its ashes is a broader, more populist, and more amorphous Dissident Right.

We still don’t know what final form it will take. What we do know is that it’s a political movement that is crossing national boundaries [Alaska truckers form convoy to support Canadian protests, Associated Press, February 7, 2022].

Border security, vaccine mandates, and immigration law enforcement may soon collide in a political firestorm that could dominate the next year. If that occurs, dissidents in both the U.S. and Canada will find that we have a common fate.