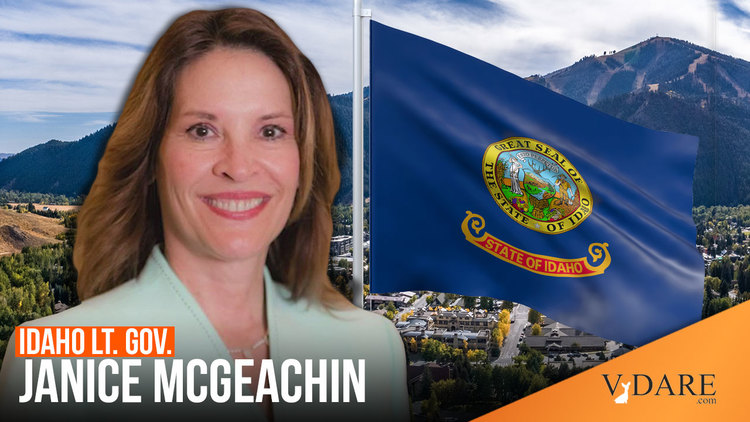 Idaho is one of the top five reddest states in America—for now. The majority of its citizens are rock-ribbed conservatives, pro-life, pro-law-and-order and devoutly Christian. Voters have chosen Republican presidential candidates every year there since 1952 (with the exception of 1964).

But while the mainstream perception might be that Idaho is immune to the kind of blue-wave transformations we've suffered in California, Washington state and Colorado, on-the-ground reality is shockingly divergent. On a recent trip to Boise, I learned from outspoken GOP Lt. Gov. Janice McGeachin that educators overseeing Idaho schoolchildren—and cops sworn to serve and protect all citizens—are promoting the very kind of Southern Poverty Law Center–infused, anti-white, anti-American propaganda that you'd expect in Democrat strongholds.

"America has stood witness to years of violence, arson and vandalism committed by left-wing extremists and Marxist radicals who hate our country and despise our values," McGeachin told me. "Despite all of what we've seen, Gov. Brad Little's hand-picked State Board of Education is hosting a '2022 Idaho Threat Assessment Conference' this summer. The conference flyer specifically calls out 'right-wing extremists' with no mention of left-wing extremists." (FYI: Gov. Brad Little is the establishment Republican incumbent since 2019; seven out of the eight members of the state Education Board are appointed by the governor.)

Sure enough, a copy of the registration flyer McGeachin showed me on the June 21-23 education conference at Boise State University is silent on liberal terrorism and violence. 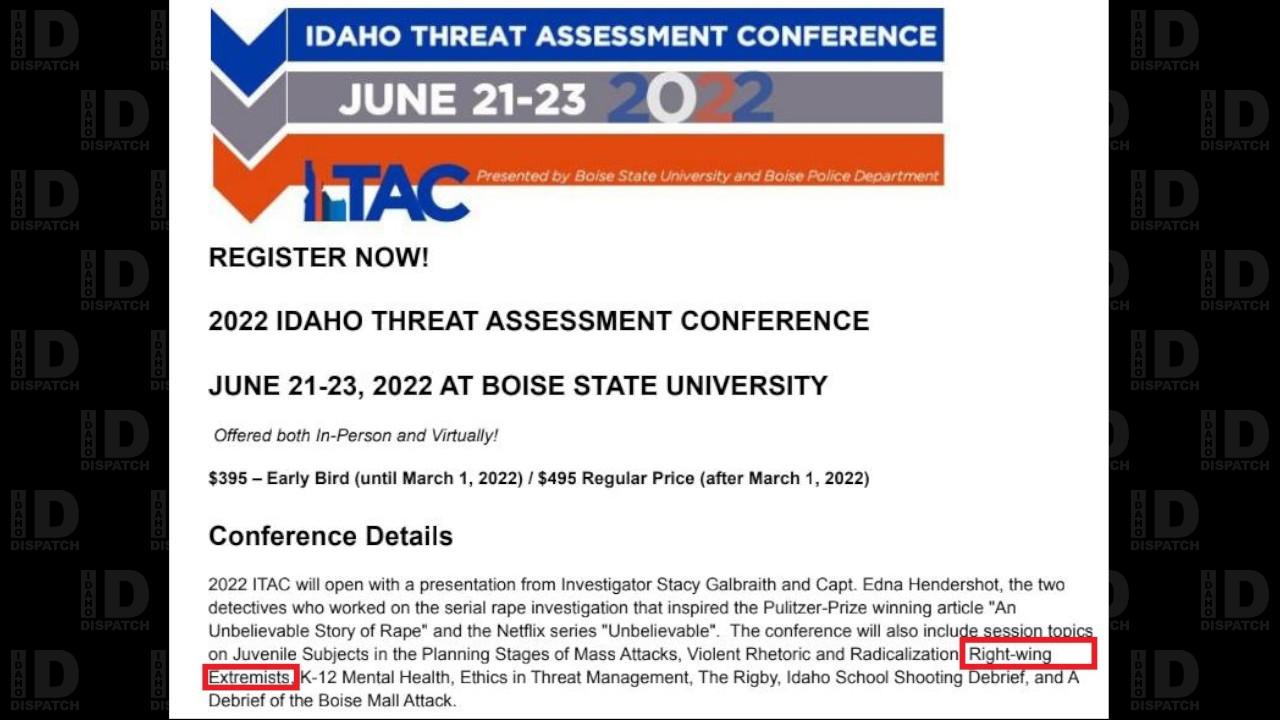 McGeachin reached out to the state Board of Education in a Jan. 31, 2022, letter demanding more answers about the program. Last week, the board denied that conservatives were being singled out this year, despite the conference flyer's omission of any references to the dominant, violent metastasis of the left-wing Antifa, Black Lives Matter, Abolish ICE, and Defund the Police movements.

The state board also admitted that "$6,000 in National Institute of Justice federal grant funds" from the U.S. Justice Department will subsidize the indoctrination session of educators, mental health professionals and, yes, law enforcement officers—including the Boise Police Department, which is cosponsoring the event. Remember: Biden has waged war and lawfare against conservatives from day one of his administration. During the Obama-Biden years, its Department of Homeland Security manufactured a panic over "right-wing extremism" as peaceful grassroots Tea Party activism had started spreading across the nation.

That seminal 2009 report [PDF] drew heavily on anti-conservative smears generated by the panic-profiteering Southern Poverty Law Center (the very same character assassination outfit working with the likes of Airbnb to ban peaceful, law-abiding America First citizens like me and my family).

Knowing this historical and political context, it's rather difficult to take Little's Idaho state board seriously when it now claims it will meaningfully address the real extremists who've burned down cities, torn down statues, and doxxed investigative journalists and ICE agents in the name of tolerance and diversity. In the wake of McGeachin's protest, I learned that the "right-wing extremism" seminar has now been stealthily re-titled: "Lethal Partisanship: Political Extremism and Violence." But lecturer Philip Saragoza's primary professional focus is, you guessed it, right-wing Christians, gun-owners, anti-COVID activists and immigration restrictionists.

"The reason this kind of conference can take place even in a deep red state like Idaho," McGeachin told me, "is because our current governor has compromised our conservative principles and allowed the radical Left to make inroads." Little—an ardent supporter of open-borders refugee resettlement that is demographically and electorally transforming Idaho—is deep in Big Business' hip pocket. McGeachin, a longtime populist activist, former state legislator and small-businesswoman, leads a crowded field challenging Little ahead of the May gubernatorial primary.

She's got guts. McGeachin has taken unapologetic action against Little and state GOP elites repeatedly for their routine capitulation on education policy, medical freedom, and law and order. She convened a task force against critical race theory while others sat on their hands. She joined citizens burning masks last spring while Little went AWOL and issued executive orders against mask and vaccine mandates while he traveled out-of-state. She is now taking on homeless camps manned by Leftist professional agitators who plague the capitol grounds while the governor diddles around.

Janice McGeachin is the kind of defiant GOP leader we need and I wholeheartedly endorse (along with Donald Trump). Empty-suit surrenderists won't keep Idaho and America free, safe and great. Bold, uncontrolled and unafraid fighters on the frontlines will.