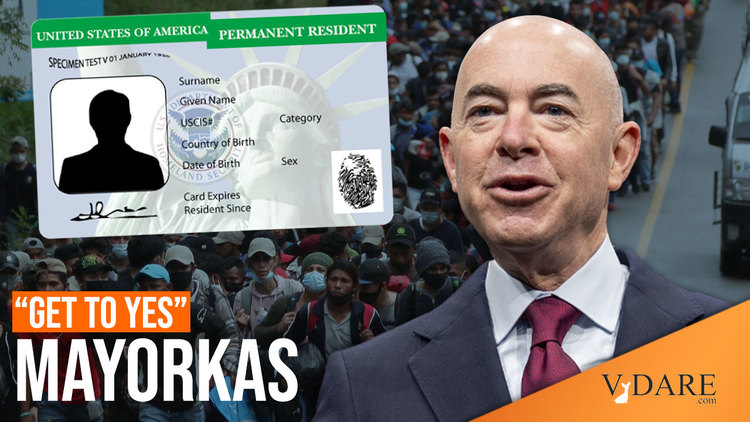 The Biden Regime Administrative Amnesty rolls on. This time the Biden Regime is planning on giving the illegal aliens who gave up custody of their children at the border during the Trump Administration lawful permanent residency—Green Cards for the uninitiated. This comes on the heels of the Biden scheme to reward those same illegal aliens with $450,000.00 each for illegally crossing the border and being criminally prosecuted for their crimes. The Biden Regime backed out of that settlement amount, and will, most likely, just wait for the controversy to die down or just let the courts enter a judgement and not appeal it.

But back to the planned amnesty.

The White House said this week for the first time that it backs permanent legal status for families separated at the U.S.-Mexico border during the Trump administration.

The new stance comes at the anniversary of a task force the Biden administration set up to help reunify family members.

“We are advocating to Congress that they provide these individuals with legal status — that requires a statutory change,” Homeland Security Secretary Alejandro Mayorkas said in an interview.

“The White House is 100 percent supportive of it, as am I, and we continue to advocate vigorously for it,” he said Monday.

The reunification task force was established Feb. 2, 2021. The administration has been working to unite entire families, meaning siblings of separated children would be eligible for permanent legal status if Congress passes legislation that aligns with the White House’s goal.

Readers will notice that it says the Regime is backing legislation to give Green Cards to these illegal aliens. Yes, ostensibly. But that is misdirection. The law is clear—none of the illegal aliens affected by the criminal prosecution of illegal aliens for unlawful entry is eligible for lawful permanent residency.

These illegal aliens do not qualify for any immigrant category, and given the parents’ convictions for violation of Title 8 United States Code Section 1325, Improper Entry By An Alien, which make them ineligible to become lawful permanent residents even if they otherwise qualified for an immigrant visa or adjustment of status, they should not even have been paroled into the United States.

However, there are plans within plans, schemes within schemes. First, if no legislation passes, the aliens will file additional lawsuits in Federal District Courts to demand lawful permanent residence. They will rely on activist kritarchs to create a right to Green Cards if you commit a crime and get separated from your children because of your arrest.

This might seem wild, but the courts have created homosexual marriage and recognized trannyism, so nothing is outside the realm of possibilities. I could see Kritarch Dolly Gee making up a new immigrant visa category; after all, she ignored Federal law on detention of aliens.

Another possibility is that these illegal aliens will file applications for asylum and the Biden Administration will see to it that those applications are approved. Alejandro Mayorkas, the Secretary of the Department of Homeland Security (DHS), was Director of U.S. Citizenship and Immigration Services (USCIS) during the Obama Regime and was notoriously and corruptly ordering the approval of applications for asylum and other benefits for which the aliens applying did not qualify. He was known for demanding that USCIS officers, including Asylum Officers, “get to yes” [Mayorkas to USCIS Staff: Just Say Yes – Or Else!, by Jessica Vaughan, CIS.org, October 20, 2010].

The last possibility is what I have warned about for some time:  Mayorkas will use his plenary authority to adjust aliens to lawful permanent residents who have been paroled into the United States. This is a little more tricky, but unlawfully approving applications for benefits is a specialty of the Deep State at USCIS.

Again, to be adjusted from parole to lawful permanent resident, there must be an immediately available immigrant visa, either family- or employment-based. None of this group of illegal aliens qualifies for those immigrant visas. Mayorkas can just order an application approved and the leftist Deep State infiltrators at USCIS will approve it. USCIS is hard at work getting MS-13 gangbangers approved for Green Cards as we speak and is rewarding naturalization fraud as well. Nothing like legality will stop Mayorkas from getting to “yes.”

By hook or by crook, Mayorkas and his Deep State cronies will reward these illegal aliens with lawful permanent residency. Mark my words.