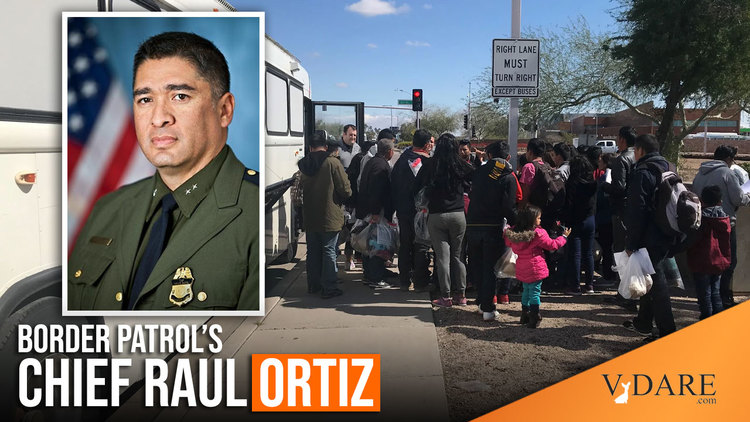 Agents Confront Border Patrol Chief Raul Ortiz: We Signed Up To "Defend The Constitution," Not Allow "Illegal Aliens To Be Dropped Off In Communities"

For the Border Patrol, part of the problem is the careerists who make up the upper echelons. They often seem more concerned about their own personal careers rather than the fact that the agency is falling apart, the Titanic of government agencies. The Border Patrol is struggling with what is called "Mission Compromise." It is no longer performing the function it was set up to do. Rather than helping to keep illegal aliens out, it is now aiding and abetting human smuggling. So, it's interesting to see what kind of a person would be fighting to get into the skipper's cabin of the sinking ship. Enter Raul Ortiz.

In a leaked video recording on Thursday, Border Patrol agents in Laredo, Texas, engaged in a tense exchange with Border Patrol Chief Raul Ortiz after expressing concerns about morale to Secretary Mayorkas. The secretary quickly handed the question off to Chief Ortiz.

Chief Ortiz responded to the question by attempting to address employee resiliency issues and the need for new programs designed to help agents with mental and physical preparedness. Ortiz told the Border Patrol agents, “We tear each other down instead of building each other up.”

Ortiz pressed the agent saying, “I get it, you come to work, you’re frustrated. You’re upset because you didn’t get the desired outcome that you want. Doesn’t mean you give up.” The exchange became heated as the agent responded by saying, “I’m not.”

As Ortiz told the agents that they all raised their hands and signed up to do what is being asked of them. One agent interrupted to say, “To defend the Constitution.” At one point, another agent told Ortiz, “You keep releasing criminal aliens into the country.”

One Border Patrol agent told Ortiz, “For evil to triumph is for good men to do nothing. That’s exactly what’s happening here. Good men are doing nothing! You’re allowing illegal aliens to be dropped off in communities.”

Ortiz has 30 years of service with the Border Patrol and could retire any time he likes. Rather than head an Agency that has gone down the tubes with an administration that is relishing its destruction, he could just walk away. Hence, I have no respect for anyone who takes the helm of the Border Patrol at a time like this. If you listen to the video, you can hear how exasperated Ortiz is with being questioned by the Agents under his command. At one point, Ortiz says, "I've been doing this job as long as y'all," to which one of the Agents responds, "That's the problem here," then goes on to confront Ortiz with Edmund Burke's quote that for evil to triumph all it takes is for good men to do nothing and flat out tells Ortiz that he (Ortiz) is doing nothing to stop this. Needless to say, Ortiz did not take such insubordination well.

I've been to talks before given by Border Patrol Chiefs in similar circumstances. Often, these events seemed more like political theater than anything else. I can recall Chief Fisher talking about how much he loved mentoring up and coming supervisors. He didn't talk about the actual job at hand and what the Border Patrol was supposed to do. It's sort of reminiscent of what is happening with our military too, as it becomes increasingly woke: a Chief who appeared more interested in getting supervisors to navigate promotions through the bureaucracy rather than actually performing the mission.

I met Chief Mark Morgan briefly at one of these town hall–style meetings. The funny thing about Morgan was that the Obama administration appointed him as Chief in the hopes of cleaning up the Border Patrol. Much like Biden, Obama was at war against the Border Patrol. Mark Morgan had been an FBI Special Agent. Initially, Morgan was brought in to replace the former head of Internal Affairs in the hopes of finding Border Patrol Agents beating up illegal aliens and then pinning those Agents' hides to the wall. Unfortunately for the Obama administration, neither Morgan nor his predecessor found any of the grand misconduct that they were hoping for. Nevertheless, Obama appointed Mark Morgan to head the Border Patrol, the first head from outside the Border Patrol. Obama must have been sorely disappointed because Morgan was fair and didn't make up stuff that didn't happen. There was no great white defendant, or Hispanic defendant, brought forward. Today, the Biden administration has to grasp at straws like Agents on the horse patrol whipping illegal aliens with their reins.