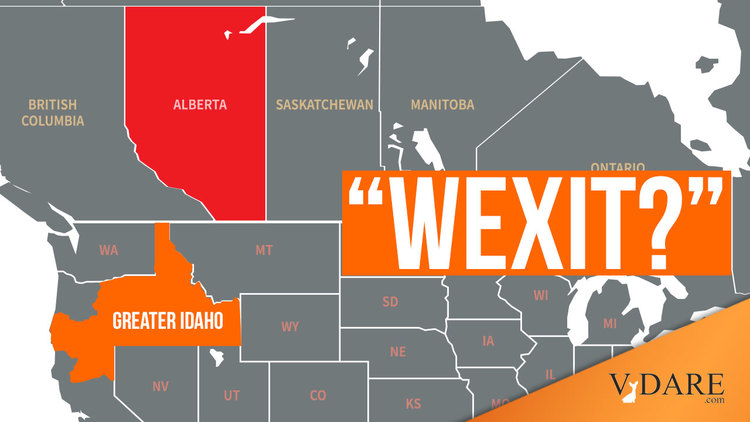 Secession? Canada’s Province Of Alberta May Lead The Way

The May 18 vote by five more Oregon counties to join a Greater Idaho is clear evidence that Secession, At Least At The State Level, Is Now On White America’s Agenda. Above the 49th parallel to the north, however, an even more radical form of secession is quietly burgeoning: the province (=state) of Alberta is showing signs leaving Canada’s Confederation altogether. As VDARE.com Editor Peter Brimelow has said  "We May See Boundaries Redrawn Across North America."

Oil-rich Alberta is the Texas of Canada. But because Canada ‘s federal system lacks the regional balancing mechanisms provided by the U.S. Senate and the Electoral College, the province has been repeatedly plundered by “Central Canada” far to the East—the population centers of Ontario and Quebec, with their megalopolises of Toronto and Montreal.

Longtime parasitism from the East has provoked repeated waves of Western alienation, and currently the institutional backing for independence is rising again: alternative media, activist networks, political parties, well-attended conferences, and think-tanks—in addition to voters staring down the province’s “conservative“ premier, Jason Kenney, leader of the United Conservative Party, as he seeks reelection in 2023.

Canada is a huge country, even bigger than the U.S. Regional identities—what Americans used to call “sectionalism”—develop naturally. Canadian sectionalism, like American sectionalism, exists independently of race, although it can be exacerbated by it e.g., by the existence of slaves and slavery in the American South.

Canadian government policy has resulted in a rate of immigration into Canada even higher than that into the U.S., but Alberta is still heavily (87%) white, with immigrants concentrated in its major cities of Edmonton and Calgary. In contrast, the Central Canadian province of Ontario is now only 68% white, and its capital city of Toronto is majority (51.5% in 2016) non-white.

Additionally, virtually all of Canada’s French-speakers are concentrated in the other Central Canadian province of Quebec, exerting immense influence over Canada’s federal government, which is based in Ottawa, between Ontario and Quebec. From Alberta’s perspective, this is alien rule.

Ottawa’s draconian COVID-19 lockdowns have rubbed salt into the wound and heightened sensitivity regarding the redistribution of wealth away from Alberta to Quebec and Atlantic Canada. Between 2007 and 2019, 6.4 percent of Alberta’s economic activity went as net transfers to other provinces: US$56,000 per Albertan or $224,000 per family of four [Fiscal Federalism and the Dependency of Atlantic Canada, by Fred McMahon, Fraser Institute, January 28, 2021]. With net transfers constituting 12.8 percent of local GDP, the Maritime provinces (New Brunswick, Nova Scotia, Prince Edward Island) were more dependent on transfers than Guatemala was on remittances.

But without federal institutions like an effective Senate and an Electoral College, Albertans’ small percentage of Canada’s population—under 12 percent—means their concerns have fallen on deaf, arrogant ears in Ottawa.

Far from empathy and reform, Albertans have received scorn and vilification for providing the supposedly dirty energy that, however, pays the federal government’s bills.

Canada’s current economic problems and Ottawa’s authoritarian response to the pandemic have further laid bare the cultural and ideological differences between Alberta and Central Canada. The former is home to rugged individualism, akin to Idaho, Montana, and Wyoming—Red State territory, in U.S. terms. The latter is Blue State land—it houses the bilingual political class of cosmopolitan urbanites; and the distinct Québécois electorate.

This divide has been consistent for decades [WAGNER: The Toronto book that predicted the rise of Western independence, 50 years ago, by Michael Wagner, Western Standard, January 25, 2021].

The revival of the Western Standard as a staunchly independent media outlet has been a godsend. And there are also two separatist political parties vying for support: the Independence Party of Alberta and Wildrose Independence (a merger of Wexit Alberta and the Freedom Conservative Party).

A poll earlier this year put Albertan support for outright independence at a remarkable 25–36 percent. The latter number assumes other Western Canadian provinces would join Alberta, so there is a slight preference for not going it alone. With that proviso, 64 percent of Kenney’s own United Conservative Party voters back independence [Third of Albertans & majority of UCP voters back Western independence, shyer about going it alone, by Dave Naylor, Western Standard, January 13, 2021].

And the provincial-partner concern is likely a non-issue, since the neighboring province, to the east, Saskatchewan, would be a natural ally. Thus the Haultain Research Institute, led by Marco Navarro-Génie, which focuses on restructuring Canada’s Confederation with especial emphasis an Alberta and Saskatchewan, until recently listed its location on Twitter as the “Province of Buffalo”—a nineteenth-century proposal that included what became Alberta and Saskatchewan.

Some skeptics are concerned about being landlocked (although this should not be a concern given free trade).  Barry Cooper, a University of Calgary professor and perhaps the leading public intellectual backing Albertan independence, has suggested a negotiation with the western neighboring province of British Columbia for a border shift to include Hope, a southern British Columbia town with Fraser River access to the West Coast. The Frontier Centre, another think tank devoted to Prairie Canada, has likewise advocated redrawing provincial borders to give Alberta-Saskatchewan tidewater access via northern British Columbia. See TIDE-WATER ACCESS—Redefining Canada’s Internal Boundaries, by  Gerard A. Lucyshyn, Frontier Centre For Public Policy No. 225 / October 2019, which is the source, page 16, of the map below. 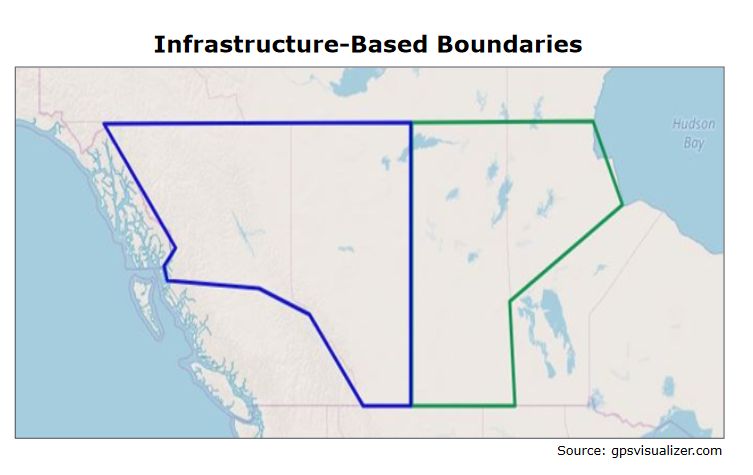 Significantly, Cooper and former federal conservative leader Stockwell Day debated the future of Canadian Confederation in late 2020, The motion: “Alberta and Saskatchewan would be better off independent.”

An earlier example of ferment: the Freedom Talk conference in Red Deer: “Meeting the Challenge of Western Separation.” Haultain’s Navarro-Génie noted that Alberta independence tends to have support among the business community and not the political class, which is the opposite of what exists in Quebec. Even though Quebec’s bid failed narrowly in 1995—by a margin of one percent—it demonstrated the constitutionality of secession and set a precedent that cannot be ignored.

Essentially all Canadian legacy media outlets are under Ottawa control through subsidies, licenses, and tax breaks, but alternative media has made the divide obvious. Thus two renegade citizen journalists in Alberta are Cory Morgan and Nadine Wellwood, both sympathetic to independence.

Morgan pointed to two realities: (1) Alberta is fundamentally distinct from Central Canada; (2) Alberta has insufficient political power, in the current Canadian system, to reform its second-class status. This has proved a hopeless task, and nothing will change without a credible threat of independence [WAGNER: Canada will never change unless Alberta is willing to leave it, Western Standard, July 20,2020].

The main opposition to Albertan independence comes from Calgary and Edmonton. Calgary Mayor Naheed Nenshi, the first Muslim mayor of a major North American city and a child of immigrants, symbolizes the immigration policy-driven change that threatens to strangle the province’s aspirations.

Western Canada’s politics are notoriously volatile. The challenge now for Premier Kenney, and why he cannot ignore the independence issue, is the rise of defiant legislators from his own party and an electorate that will back a minor party against him. 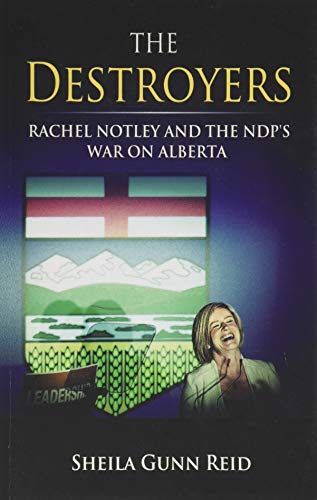 This is fresh in Albertans’ memories, since there was a parallel occurrence in 2015. Limited-government advocates were frustrated with corruption and bloat in what was then the Progressive Conservative Party. They backed an upstart party and split the conservative vote down the middle.

The source of the current fracture is the burgeoning desire among Albertans to forge their own path as a sovereign nation and dispense with the lost cause of Ottawa.

Premier Jason Kenney will have to choose between placating Ottawa or representing his increasingly militant base.

Rodric Gordon [Email him] is proud of his British roots and a believer in American ideals. He writes to protect the best of the West, and he leans on his observations as a longtime traveler and journalist in the Americas.