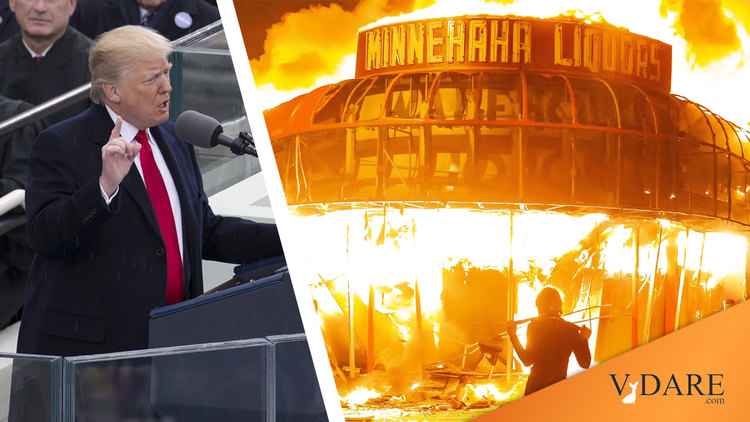 What Might Have Been: Trump Regrets Not Immediately Sending In US Military To Crush Black Lives Matter Terrorists In Summer Of 2020

We all know the quote. Today, it hurts more when you consider what should have been done during the Black Lives Matter insurrection of 2020: the US Military should have put down the riots after the burning of the 3rd Precinct in Minneapolis, with the elected officials in the beleaguered city acquiescing their monopoly on violence to the mob.

It only got worse across the nation after this, with lawlessness leading to the toppling of statues and monuments, burning of buildings, loss of life, and massive property damage. Worse, all police became fearful of being accused of racism if they had a filmed encounter with a black suspect, leading to a massive homicide/nonfatal shooting increase nationwide.

With this, we remember the words of Whittier, “for all the sad words of tongue and pen, the saddest are these, ‘it might have been.”

Trump said he regrets not ‘immediately’ sending in the US military to quash nationwide unrest last summer, Business Insider, July 19, 2021

Former President Donald Trump said he regretted not “immediately” deploying the military into US cities to quash unrest last summer.

“I think if I had it to do again, I would have brought in the military immediately,” Trump told the Washington Post reporters Carol D. Leonnig and Philip Rucker in a March interview, according to an excerpt from their new book, “I Alone Can Fix It: Donald J. Trump’s Catastrophic Final Year.”

After the death of George Floyd at the hands of a Minneapolis police officer in May 2020, calls for racial justice and condemnation of police brutality quickly turned into protests. While many were peaceful, others were not. Unrest in the aftermath of Floyd’s murder was seen in numerous cities across the country, from Portland, Oregon, to Washington, DC.

On June 1, 2020, Trump threatened to deploy US troops if states did not call up the National Guard to deal with the protests and, at times, rioting, violence, and destruction.

“If a city or state refuses to take the actions that are necessary to defend the life and property of their residents, then I will deploy the United States military and quickly solve the problem for them,” he said in the Rose Garden.

Trump’s remarks appeared to indicate that he intended to invoke the Insurrection Act, a rarely used power that allows the president via an executive order to deploy active-duty military troops domestically to address unrest and enforce the law. The measure is widely viewed as a last resort to impose order when a state’s forces are insufficient or the unrest threatens the government itself.

At one point, Trump tried to put Chairman of the Joint Chiefs of Staff Gen. Mark Milley in charge of a military response to the protests, but Milley pushed back, which set off a profanity-filled shouting match in the Situation Room, according to the Wall Street Journal reporter Michael C. Bender’s new book, “Frankly, We Did Win This Election.”

Trump denied such an incident took place, telling Axios it was “fake news.”

Bender also writes that Trump wanted to use the military to “beat the f— out” of protesters, according to CNN, but such aggressive rhetoric was met with resistance by other officials, including Milley.

Amid concerns that Trump planned to invoke the Insurrection Act of 1807, Mark Esper, then the secretary of defense, publicly announced that he did not support such a move.

“The option to use active-duty forces in a law-enforcement role should only be used as a matter of last resort and only in the most urgent and dire of situations,” Esper said at a Pentagon press briefing. “We are not in one of those situations now. I do not support invoking the Insurrection Act.”

Esper said the National Guard was better-suited for that mission. Nation Guard troops, in contrast with the active-duty military, train to quell civil unrest with as little force as necessary and typically are residents of the states and regions where they serve.