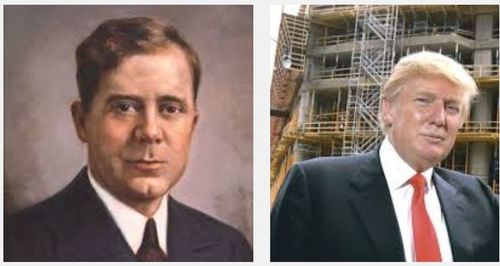 Is Donald Trump The New Huey Long? Will The Immigration Answer Be Moratorium?

The current phenomenon of The Donald leading the Republican polls for the presidential nomination reminded me of a much earlier example of an improbable force emerging on the political scene. Like today, it came at a time when America was in economic trouble and millions of people were looking for relief.

Huey Long (pictured above left)was the Governor of Louisiana at the beginning of the Great Depression and a Senator from 1932 until he was assassinated in 1935. He was best known for his “Share the Wealth” program and savage denunciations of the rich. His program of wealth redistribution, known as “Every Man a King,” was a populist challenge to the administration of Franklin D. Roosevelt.

Long blasted the Federal Reserve, called for huge programs of public works, and expanded schools and hospitals. Critics charged he was a potential dictator and demagogue. Yet times were so desperate that Long found a huge amount of support, despite (or perhaps because of) his outlandish antics. He was taking on issues no one else would and his larger than life persona added to his appeal. Long wasn’t called The Kingfish for nothing.

Obviously, Long’s redistributionist agenda was virtually the reverse of Trump’s, but their mutual ability to appeal to the masses by attacking the political class means they can both be characterized as anti-System populists.

And our contemporary economic situation also bears ominous similarities to the Great Depression. While we aren’t in a “depression,” we are in a silent employment crisis, as the flood of unskilled and even skilled immigrants has put millions of Americans out of work.

With Trump seizing on the immigration invasion and scoring a political coup with his recent trip to the Mexican border, the formerly forgotten issue of mass immigration is at the center of the presidential campaign. How will he fare in his first debate with his Republican competitors, assuming they even let him compete? Only time can tell. But we already know for sure that they will be forced to confront the issue and perhaps even broach the possibility of a moratorium.

The Democrats have already ceded the issue entirely. Democratic House Leader Nancy Pelosi hasn’t backed away from her support for an Amnesty/Immigration Surge even after the murder of one of her constituents. Yet even they may be forced to pay attention if Trump’s surge continues.

Of course, as the career of Huey Long shows, such an end can come quickly and even tragically. But as I wrote before, the issue is bigger than the man.