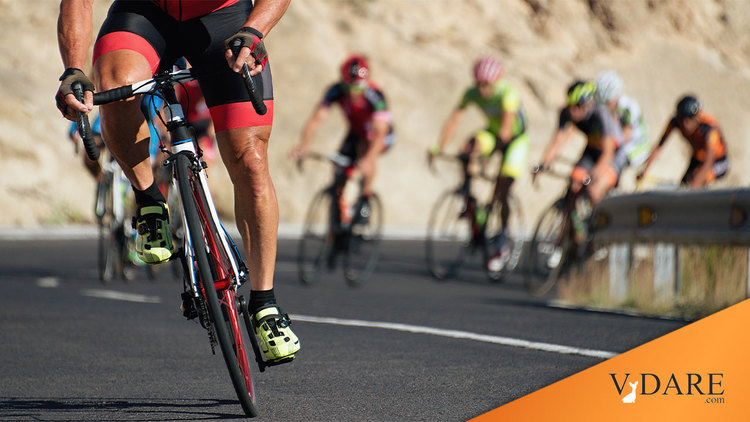 Woke Whine Generator App: "It’s Time For Cycling To Think Beyond White Fragility, White Privilege, Implicit Bias, And Microaggressions, And Begin To Think About Its Root Cause."

The handy Woke Whine Generator app must be up to about release 3.1 by now, judging by the exhaustiveness with which all possible Anti-Racist cliches are deployed in this article in Bicycling:

Cycling and the Power of White Privilege

“ANTI-RACIST EFFORTS WITHIN CYCLING MUST MOVE BEYOND THE EUPHEMISMS OF INCLUSION, DIVERSITY, SENSITIVITY, AND ALLYSHIP, AND BEGIN TO SERIOUSLY CONSIDER THE DIMENSIONS OF POWER AT PLAY.”

When George Floyd, Breonna Taylor, and others were killed by the police in 2020, forcing the nation into a racial reckoning, the cycling industry responded with promises to be part of the solution rather than part of the problem. Fuji announced it was suspending the sale of their bikes to police departments, while various other industry leaders committed themselves to increasing diversity in the sport of cycling.

Yet, looking at the actions of some cyclists at the top of the sport, along with their sponsors, I see how the system of privileges and advantages afforded to white people remains strongly rooted both inside and outside the sport of cycling.

It’s time for cycling to think beyond white fragility, white privilege, implicit bias, and microaggressions, and begin to think about its root cause. Cycling must reject interventions that continue to individualize anti-Black racism, and work to break down the structures that allow whiteness to retain power in the sport.

Anti-racist efforts within cycling must move beyond the trite euphemisms of inclusion, diversity, sensitivity, and allyship, and begin to seriously consider the dimensions of power at play. Yes, control of cycling resources are important, as are safe spaces to ride one’s bike, but the power of whiteness within cycling remains unsullied. …

The article then goes on to complain at length that some lady pro cyclist liked a tweet making fun of Colin Kaepernick several months ago and her life hasn’t been ruined yet.