Peter Brimelow's 'Alien Nation" may do for immigrant bashing what Charles Murray's "the Bell Curve" did for racism—make it respectable.

(Inset photograph: Jacket photo of Peter and young Alexander, below it a photo of some Spanish-Americans waving U.S. flags, probably at a Citizenship Swearing-in ceremony, which may have been conducted in English. The caption reads: Will those nasty immigrants (below) come for Brimelow and his son?) 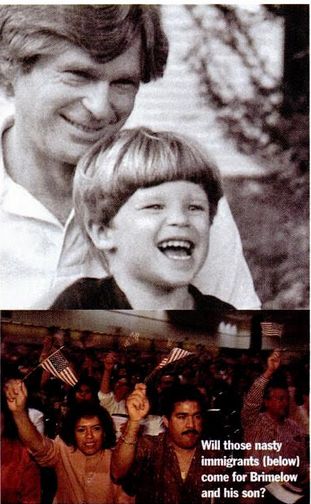 Not so long ago, the literature of egregious bigotry was treated like pornography. You had to send for it by mail—from backwoods presses that advertised in the classified sections of conservative magazines—or frequent the political equivalent of dirty bookstores. Today, you just walk into any Barnes & Noble. The Free Press set the precedent last fall with Charles Murray and Richard Herrnstein's The Bell Curve, which argued that blacks are genetically less intelligent that whites. Now comes Random House with Peter Brimelow's Alien Nation., another expression of intellectualized white rage that attempts to do for immigrants, and Hispanics in particular, what Murray did for blacks. Odds are it will enrage sensible folk, convince no one, and earn a small fortune.

Murray and Herrnstein were enough cowed by the taboo they were violating to bury their conclusions and couch them in the obscure argot of social science. Brimelow, a journalist at Forbes and a British immigrant himself, doesn't bother to mumble. The browning of America, he contends, is self-evidently a Bad Thing. To quote his peroration: "Any change in the racial balance must obviously be fraught with consequence for the survival and success of the American nation. It is simply common sense that Americans have an interest in their country's racial balance. It is common sense that they have a right to insist that their government stop shifting it. Indeed, it seems to me that they have a right to insist that it be shifted back."

Wow. Brimelow tries to inoculate himself by complaining in advance that about people who will seize on this rhetoric to call him racist. It is regrettable to end conversations with name-calling. But what is racism if not an unreasoned objection to living alongside people who aren't the same race? And an unreasoned objection his is. Instead of offering arguments, Brimelow simply appeals to "common sense" (he fancies himself a latter-day Tom Paine) and postures about the sort of country his very white 3 year-old son, portrayed on his father's knee on the back cover, will inherit.

But forget for a moment the book's in-your-face vileness, and consider its evidence. To demonstrate that we're experiencing a catastrophic deluge, Brimelow resorts to statistical abuses that would make a high-school debater blush. His first distortion is a chart that shows immigration in absolute numbers. By including those who applied for legal status under the temporary amnesty of a few years ago, he succeeds in producing a recent "spike." But what matters is the number of newcomers relative to population. And that figure is quite low, something like one fifth of what it was between 1900 and 1910. Even in absolute terms, the numbers are pretty unimpressive. In the early years of the century, when population was around 75 million, legal immigration exceeded a million per annum; the population is now 260 million, and immigration runs in the 800,000 range, including refugees. Desperate for some way to make the situation look terrifying, Brimelow points out that those born elsewhere now amount to 37 per cent of population growth. But this hardly testifies to a mass influx, since population growth overall has tapered off. A more meaningful statistic is the percentage of our population that is foreign-born. At less than 7 percent, that number is , once again, much lower than at many points in American history.

Though Brimelow seems truly alarmed by off -whiteness of all shades, it is Latinos in particular that drive him up a tree. About this "strange anti-nation inside the U.S.," as he calls them, Brimelow resurrects all the timeworn canards about immigrants: They're criminal, they bring diseases, they reject our culture, they refuse to learn English and assimilate, they take our jobs, they drain our resources, and on and so forth. He might at least have made an effort to explain why the dire forecasts didn't prove true before, but will now. Instead he defends the "nativist" tradition. Among his self-described heroes are the Know Nothings, who he argues were not unreasonable in objecting to the arrival of Irish Catholics fleeing the potato famine.

One could painstakingly try to refute all of the current arguments against immigration, but most of them can't be found here. Alien Nation, which grew out of an article in National Review,( a magazine edited by John O' Sullivan, another anti-immigrant immigrant Brit), is remarkable for its intellectual shoddiness. Sources cited in its footnote include the least savory of anti-immigrant propaganda, and things like dust-jacket excerpts. Brimelow makes his own points in ludicrous sound bites. After noting an estimate that immigrants generate an economic surplus of only $6 billion to $18 billion (an estimate disputed by the vast majority of serious economists), he continues:" If immigration is indeed causing a net loss to the tax payers of $16 billion ... that means its economic effects re neutral. It's a wash!!! America is being transformed for—nothing? Yep. That's what it looks like." Well, nope, it doesn't (or nope, it doesn't!!!, as Brimelow would say).

When challenged at a recent Manhattan Institute lunch, Brimelow repeated a defense he makes ad nauseum throughout his book: He doesn't need to prove his case , because the burden of proof rests on those who support immigration. It is they who need to demonstrate the benefits of changing America, not he who needs to defend keeping it the same. This is where Brimelow shows just how flawed his understanding of America really is. "The same" is immigration. Immigration, writes the historian Madwyn Allen Jones, another, more enlightened Britisher, is "America's historical raison d'être, the most persistent and most pervasive influence on her development." In fact, throughout American history, immigration has been restricted only intermittently.

Brimelow asserts that thanks to immigration, the United States is on the verge of turning into a cauldron of ethnic conflict on the order of Lebanon or Yugoslavia. Why? because, he blithely says, multicultural societies don't work. But America isn't a multicultural society. It's a melting pot with a tiny minority of radical separatists. The children of immigrants continue to learn English and assimilate despite the excesses of bilingual education, just as they always have. I am not surprised that Brimelow fails to understand this, but I am amazed that Random House publisher Harry Evans,(yet another anti-immigrant English immigrant) has gone out of his way to give these half baked musings his personal endorsement.

None of this is to say that there aren't problems with the current system. Illegal immigration is an obvious one. The bias of the 1965 reform act, which skews immigrant pool by giving heavy weight to distant family ties, is another. The result has been to favor a few ethnic groups, the largest of which are unskilled and poorly educated Mexicans, and to crowd out many nationalities whose members can't enter because they don't have relatives here. Immigration is also unfair to states like California and Florida, which disproportionately attract newcomers. This is because the economic benefits of immigration flow to the federal government, while most of the costs accrue locally. In New York City, where the foreign-born population exceeds twenty percent, tax revenues generated by immigrants do not cover the cost of increased school enrollment, for instance. But all of the problems could be solved with a sound reform bill. We need to caulk the cracks along the border, downgrade the preference for non-immediate family, and come up with federal help for immigrant-swamped regions. It's not that complicated.

And there's one xenophobic restriction I would support: an indefinite moratorium on right-wing Brits coming to tell us about threats to American values. As Archie Bunker would say, if you don't like it here, you can go back where you came from.