This Day In VDARE.com History, 2015: "Hands Up Don't Shoot" Was A Lie. Data Shows Latest DOJ Report Is, Too.

This was originally published on this day in 2015. The Trayvon Martin Hoax and the attack on Ferguson by the DOJ were supported not only by then-President Obama, but the Conservatism, Inc. types at National Review. 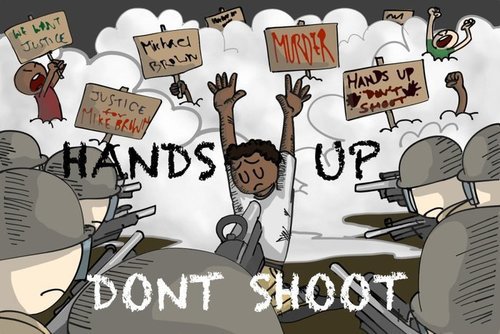 "Hands Up, Don't Shoot" was always a lie—so is the alleged racism of the Ferguson PD.

The Department of Justice’s stunning 86-page report on the shooting of Michael Brown reveals #HandsUpDontShoot was a lie and there can no longer be any doubt that Officer Darren Wilson’s actions on August 10, 2014 were justified. But this being Occupied America, the report still manages to condemn the Ferguson Police Department for “racism” and the Main Stream Media is predictably piling on. Of course, this despicable trick hides a more far more disturbing truth—the color of crime in Ferguson is almost entirely black, and, if anything, the Ferguson Police Department may have been too restrained.

Though the MSM is already trying to bury it, it’s important to highlight how utterly damning the DOJ report is to the Narrative of the Gentle Giant. Almost every aspect of the Michael Brown story that was used to justify the media feeding frenzy around Ferguson was based on a lie [DOJ Clears Officer Wilson in Devastating Report, by Jared Taylor, American Renaissance, March 4, 2015].

To bury this utterly devastating revelation, the Department of Justice has now pivoted to reveal the supposed “racism” that lurks in the hearts of the 94 percent white Ferguson Police Department [Ferguson’s Police Force is 94 percent White—And That’s Basically Normal in the U.S., by Rebecca Leber, New Republic, August 13, 2014]

And if you didn’t know anything about Ferguson’s racial history, you might think the DOJ had succeeded in revealing a pattern of discrimination:

Ferguson, Mo., is a third white, but the crime statistics compiled in the city over the past two years seemed to suggest that only black people were breaking the law. They accounted for 85 percent of traffic stops, 90 percent of tickets and 93 percent of arrests. In cases like jaywalking, which often hinge on police discretion, blacks accounted for 95 percent of all arrests.

The racial disparity in those statistics was so stark that the Justice Department has concluded in a report scheduled for release on Wednesday that there was only one explanation: The Ferguson Police Department was routinely violating the constitutional rights of its black residents.

Just as with “Hands up, Don’t Shoot,” this is a lie. Why? Because the arrest rate of blacks for offenses that don’t “hinge on police discretion,” like violent crimes, also systematically exceeds their proportion of the population. In other words, so far as we can tell with objective statistics, the plain fact is that the color of crime in Ferguson is black.

There are three elements to this story.

First, properly to understand crime figures, you have to realize that Ferguson, Missouri is a community devastated by sudden white flight. The city is currently 70 percent black, but this is a very recent development.

Since the Supreme Court declared Restrictive Covenants on property unconstitutional, and with Federal government openly working to impose diversity on white America through “Fair Housing,” Section 8, refugee resettlement etc., no city can protect itself against the kind of white flight we’ve seen over a 40-year time period in Ferguson.

Once whites leave the city, the tax base erodes, property values plummet, and only certain kinds of businesses can feasibly stay open and turn a profit. [Blame poverty, age for weak North County home market, by Jim Gallagher, St. Louis Post-Dispatch, August 18, 2013]. I call this effect the “Black Undertow.” This is what happened to Ferguson, and the riots have only accelerated the flight of human capital from the city.

This brings us to the second component of the story. The DOJ report claims the Ferguson police have been effectively rebranded as a “collection agency.”

The report on Ferguson found that the city used its courts to increase revenue and used its police department as "a collection agency."

"Patrol assignments and schedules are geared toward aggressive enforcement of Ferguson’s municipal code, with insufficient thought given to whether enforcement strategies promote public safety or unnecessarily undermine community trust and cooperation," the report said. "Officer evaluations and promotions depend to an inordinate degree on 'productivity,' meaning the number of citations issued."

Of course, what the DOJ report leaves unmentioned is why such an approach is needed: the absence of a reliable tax base. And even so, these practices don’t necessary show “racial bias” on the part of the primarily white police force in now 70 percent black Ferguson.

And that brings us to the third element of the story, the actual crime rates. For all the MSM attention given to Ferguson, few supposed journalists have done any reporting other than repeating whatever hashtags were held up by vapid celebrities.

So it was left to me. I called the Ferguson Police Department to obtain the crime reports sorted by race that extended back at least a decade. (Significantly the Justice Department examined only a sample size of the last three years—probably to avoid revealing systematic and long-standing black criminality.) I was told by an officer that I was the first journalist to ask for this information.

I was told to consult The Missouri Uniform Crime Reporting Program (MUCRP), which allows anyone to pull reports—going back to the year 2001—for every city in Missouri.

You can search for various report types, including arrests by age, sex, crime with race.

So, doing what the Department of Justice and apparently every journalist in America is incapable of doing, I pulled those arrest reports on the MUCRP site for Ferguson going back to 2001.

In viewing the following, please remember that according to the 2000 U.S. Census, the city of Ferguson was only 52 percent black.

These numbers are nearly a complete match to the crime statistics I pulled from the City of St. Louis Metropolitan Police Department Annual Report to the Community, which breaks down the arrests rates for violent crime by race (you can research 1999-2012 at the site).

In other words, black criminality in and around Ferguson is systematic and long-standing. And as the proportion of blacks in Ferguson rose, the absolute amount of crime increased even more dramatically.

These figures make the MSM’s whining about Ferguson’s “racism” not just irrelevant, but offensive. Ferguson was burned out, businesses were destroyed, and the city’s future was ruined because local governments were unable to maintain public order and because the MSM will not to do its job and report the truth about what’s going on.

Instead, we are supposed to be apoplectic because policemen sometimes sent mean emails.

In the end, the Ferguson Farce and the Department of Justice’s report on the so-called racial discrimination against blacks by the Ferguson Police Department is just another episode in the long-running series of attempts by our rulers to repress the reality of black crime.

Black crime drives down property values, destroys the tax base, and guts a city from the inside out. Eric Holder scapegoating the remnants of Western Civilization in Ferguson won’t do anything to change the reality that Ferguson is a city in ruins as a direct result of the government policy decisions and judicial rulings.

Ferguson has gone black. And I doubt it’s coming back. What about America?