I spent the month of August far from the madding crowd’s ignoble strife. I therefore missed the Ferguson business, which seems to have featured some seriously madding crowds and strife at a dismal level of ignobility.

Hastening to catch up, I purchased the September 1st issue of Time magazine, which has a cover story on “The Tragedy of Ferguson.” 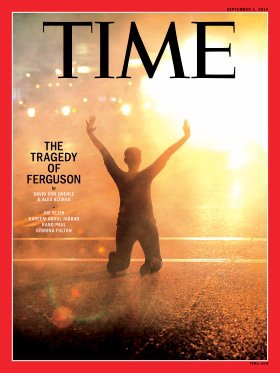 Yes, I know: Time is a mouthpiece for the left-liberal Narrative, and has been since whichever week it was in the late 1960s they lurched from ardent support of the Vietnam War to fierce opposition. If I didn’t know that, the way they phrased the title of that cover story would have alerted me.

The word “tragedy” has long since departed from its dramaturgical origins; its colloquial usage has spread out to include almost any event involving a human death. Words often tend to lose their specificity like that in the ordinary course of language change, and there is no use complaining about it.

In an organ of the Narrative, however, “tragedy” nowadays always signifies a regression, a stumbling or backsliding in the forward progress of our society towards a radiant future of racial equality and harmony; and to earn the title of a “tragedy” the regression must be, or must be suspected of being, due to the malice of heterosexual white males against some Designated Victim Group, usually blacks.

Once you have learned to parse mainstream-media style and vocabulary like this, outlets like Time can be worth reading. To resist the Narrative, after all, you have to know what it’s saying at any given time, and what the words really mean. Probably North Koreans peruse the Pyongyang News in a similar spirit.

When, for example, the Time writers—they are bylined as  David Von Drehle and? Alex Altman—say that poverty is “rising steeply in every neighborhood” of Ferguson, the clued-in dissident reader understands that businesses and hipster gentrifiers are taking back some nearby inner city—in this case St. Louis, ten miles away—and pushing underclass blacks out to Section Eight housing in suburban Ferguson.

What do these worthies have to tell us?

There is some boilerplate left-liberal nonsense about how “black women have been casually violated by white men for 400 years.”

No they haven’t! I refer Mr. Klein to Chapter Four of Time on the Cross, in which the authors, working from—good Lord!—actual data deduce that antebellum miscegenation was unusual and mainly occurred among urban freedmen, and that “[antebellum] white men who desired illicit sex had a strong preference for white women.” (The authors, good liberals both, put this down to “racism”!)

On the other hand Klein is frank about black criminality: “Blacks represent 13% of the population but commit 50% of the murders … Black crime rates are much higher than they were before the Civil Rights movement.” He even ventures to the very edge of the race-realist precipice: “The facts suggest that history is not enough to explain this social disaster.”

If history doesn’t explain it, what does? Why, culture!

Absent a truly candid conversation about the culture that emerged from slavery and segregation, [these problems] won’t be solved at all.

I guess it’s a bit much to expect that a salaried correspondent at a major newsmagazine should know anything about intellectual history, but usage of the word “culture” in Klein’s sense dates only from the middle 20th century. Prior to that the corresponding concept was usually called “history.” Concerning which, see above.

Given the racial disparities in our criminal-justice system, it is impossible for African Americans not to feel like their government is particularly targeting them.

What does this even mean? “Their government”? What, the federal government? Eric Holder’s Justice Department is “particularly targeting” blacks? Or perhaps Paul means the state government of Missouri. Here is the head of law enforcement in that state.

And what are those disparities, Senator? If you factor in the huge differences in criminality between blacks and nonblacks, as noted by Joel Klein, are there any unexplained disparities left over?

Paul is sounder on the militarization of the police (which, to be fair, is his main point).

Washington has incentivized the militarization of local police precincts by using federal dollars to help municipal governments build what are essentially small armies—where police departments compete to acquire military gear that goes far beyond what most of Americans think of as law enforcement.

I’ll go some of the way with him there. Free people should always be wary of police power. Sir Robert Peel’s creation of London’s first police force met with strong opposition from the citizenry, who feared it might lead to a continental-style militarized state. The counter-argument was that in cases of extreme civil disorder, like the Gordon Riots of fifty years earlier, the army had had to be called out anyway.

Sir Robert got his way after promising that his Metropolitan Police force would be unarmed. British police remain unarmed on normal duties, although public opinion increasingly favors arming them, and firearms are issued when necessary—on 190 occasions in the county of Derbyshire during 2011-12, to take a jurisdiction at random.

What, after all, are civil authorities supposed to do in a case of mass public disorder, when buildings have been torched and normal life brought to a stop for days on end? It is possible to have order without liberty—ask a North Korean—but it is not possible to have liberty without order.

There will always be some point at which the actual choice is between a militarized police and the actual military. While sympathetic to Senator Paul’s suspicion of state power, I’d like that point to be far up the civil-military scale.

Among blacks there is much hypocrisy about policing. The lady who blogs at Those Who Can See posted a fine piece a few weeks ago under the title “Victimization Whack-A-Mole.”

One of the most fearful drug waves of the late 20th century became a rallying cry for harsh justice. Heather Mac Donald:

“Black leaders were the first to sound the alarm about the drug, as Harvard law professor Randall Kennedy documents in Race, Crime, and the Law. Harlem congressman Charles Rangel initiated the federal response to the epidemic, warning the House of Representatives in March 1986 that crack had made cocaine ‘frightening[ly]’ accessible to youth … The bill that eventually passed, containing the crack/powder distinction [5 years minimum for 5 g. of crack], won majority support among black congressmen, none of whom, as Kennedy points out, objected to it as racist.” [Text in quotes from Is the criminal justice system racist? by Heather Mac Donald; City Journal, Spring 2008.]

This legislative effort has today been shoved down the memory hole, as another chance for victimization whack-a-mole presents itself: “The disparity in penalty triggers between crack and powder cocaine is one of the most notorious illustrations of racism in the criminal justice system … The National Conference of Black Lawyers helped to convene a national symposium in 1993 … The near unanimous consensus from those assembled was that the sentences for crack cocaine are … highly inequitable against African Americans and, thus, represent a racially discriminatory national drug policy.

“The Coalition also sponsored a legislative briefing which culminated in Representative Charles Rangel (D-NY) introducing a bill to eliminate the disparity and make the sentences of those convicted of crack cocaine offenses equivalent to the current sentences for powder cocaine.” [Text in quotes from Crack Cocaine Reform at the National Association of Black Lawyers website; January 23, 2014.]

Another example of Victimization Whack-a-Mole showed up in the wake of the Ferguson riots. Blacks have of course been loud in denouncing the militarization of local police. And that’s odd, because just this June a big majority of the Congressional Black Caucus—including Ferguson’s own representative—voted against demilitarization of the police!

Kareem Abdul-Jabbar’s contribution to the Time symposium is titled: “The Coming Race War Won’t Be About Race.” Oh yeah?

After a preliminary flourish of racial resentment that the Kent State shootings of 1970 got far more publicity than the Jackson State shootings ten days later, Abdul-Jabbar gets down to the old-time Old Left religion:

We have to address the situation not just as another act of systemic racism, but as what else it is: class warfare … This fist-shaking of everyone’s racial agenda distracts America from the larger issue that the targets of police overreaction are based less on skin color and more on an even worse Ebola-level affliction: being poor …

You can almost hear the Woody Guthrie accompaniment.

Lots of luck with that, Kareem, but thanks for the sixties nostalgia trip.

The not-guilty verdict on George Zimmerman seemed right to me, and the Main Stream Misrepresentation (downward) of Zimmerman’s activities, and (upward) of Martin’s character, utterly disgraceful. Still, it is no small thing to lose a child, whatever the circumstances, and it would take a writer far more skillful than I am to comment on the lady’s words without violating decorum.

The question at the head of the Time symposium is: What should we do? The answers on display are:

With proper respect all round, I don’t think any of this meets the case, or even comes close.

My own answer to TIME’s header question is: We should promote race realism, spreading the understanding that innate race differences—and black/nonblack differences most of all—are real and socially consequential.

The alternative is to continue with the current fiction that observed differences in social outcome are the result of “racism”—which means, of white malice.

Was ever a more poisonous notion put about, filling blacks with seething resentment and whites with paralyzing guilt?

The culprit is not Whitey—it is Mother Nature.

The solution is not more rage and more guilt, but realism, seasoned with patriotism, proper compassion, and firm paternalism.

There is no other way forward if we are to remain one nation with equality under fair laws.