In recent years, the Administrative-Media Narrative Generation Complex has chosen a number of test cases that have blown up in their faces. But they are still in charge of the commanding heights of law enforcement and the press, so they get to practice Conservation of Narrative: They devise face-saving fallbacks and have them trumpeted as the Big News.

WASHINGTON — The Justice Department has nearly completed a highly critical report accusing the police in Ferguson, Mo., of making discriminatory traffic stops of African-Americans that created years of racial animosity leading up to an officer’s shooting of a black teenager last summer, law enforcement officials said.

Granted, Michael Brown appears to have been a pedestrian rather than a motorist, but if he were a motorist, how else could he have responded to this pattern of disparate impact in traffic stops than by stealing a box of cigars, roughing up the tiny Asian shopkeeper, walking down the middle of the street, then trying to kill the cop who told him to get on the sidewalk?

According to several officials who have been briefed on the report’s conclusions, the report criticizes the city for disproportionately ticketing and arresting African-Americans and relying on the fines to balance the city’s budget. The report, which is expected to be released as early as this week, will force Ferguson officials to either negotiate a settlement with the Justice Department or face being sued by it on civil rights charges.

It’s kind of like if in 1905 France, the anti-Dreyfusards had responded to proof of the innocence of poor Major Dreyfus, whom had locked up on Devil’s Island, by changing the subject to building code violations in French synagogues.

Either way, the result is likely to be significant changes inside the Ferguson Police Department, which is at the center of a national debate over race and policing.

Because there is nothing more central than Ferguson, Missouri, the world’s most famous place.

Ferguson erupted into angry, sometimes violent protests after a white police officer, Darren Wilson, shot and killed an unarmed black teenager, Michael Brown, in August. The Justice Department investigated that shooting, and officials have said they will clear the officer of civil rights charges. That finding is also expected soon. 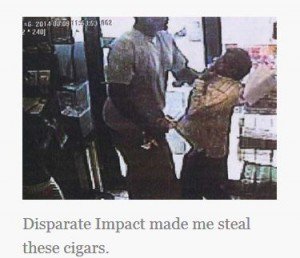 … Blacks accounted for 86 percent of traffic stops in 2013 but make up 63 percent of the population, according to the most recent data published by the Missouri attorney general. …

Investigators do not need to prove that Ferguson’s policies are racially motivated or that the police intentionally singled out minorities. They need to show only that police tactics had a “disparate impact” on African-Americans and that this was avoidable. Nevertheless, the Justice Department’s report is expected to include a reference to a racist joke that was circulated by email among city officials, according to several law enforcement officials.

Post
Triathlon Is Racist But Triathletes Are Good, Or Something
MORE...
POPULAR TAGS