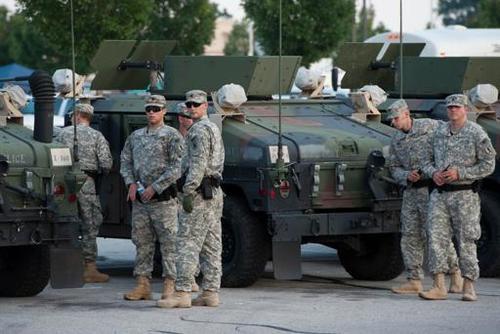 The Ferguson Riots: Par For The Course In The “Black Community”

It’s just another day in one of America’s black neighborhoods.

Democratic governor Jay Nixon of Missouri finally sent in the National Guard, without consulting with the Obama Administration [Report: Nixon Did Not Give White House ‘Heads Up’ He Was Calling In National Guard, CBS St. Louis, August 18, 2014]. But, in a characteristic liberal vacillation, he has dropped the curfew. [In Ferguson, more protests — but calmer, By Larry Copeland and Charisse Jones, USA TODAY, August 18, 2014 ]

The Ferguson riots have now lasted longer than the 1965 Watts riot, but the Main Stream Media is still doing its best to defend rioters and blame nonexistent “police brutality”— leading to hilarious situations like a Huffington Post reporter mistaking foam earplugs for rubber bullets. But none of this is particularly unusual—the simmering violence, rampant lawlessness, and collapse of civic order is just par for the course in black neighborhoods all around the country. Take it from me, I’ve lived in them.

And, like anyone who has actually lived in a black neighborhood, I can testify that the expectation of physical safety, respect for public and private property, or basic standards of social decorum are simply absent from vast swathes of what used to be our country.

In a real sense, these areas have simply dropped off the map of Western Civilization.

The events leading up to the shooting of Michael Brown show why these riots are not unusual, but a simple flare-up of a constant low-level intifada.

Liberal students kvetch about “microaggressions,” or petty verbal violations of Political Correctness, but life in a black neighborhood is a never-ending series of real aggressions, as residents constantly push to see what they can get away with. When those violated respond with force, blacks adopt a posture of helpless victims and are eagerly assisted by a media willing to push an anti-white Narrative.

Life in the ghetto is Fourth Generation Warfare in miniature.

The fatal confrontation between Brown and the police was reportedly sparked by an officer telling Michael Brown and Dorian Johnson to get out of the road and stop blocking traffic. [Police: Michael Brown stopped because he blocked traffic, by Trymaine Lee and Michele Richinick, MSNBC, August 15, 2014] This may seem petty, but it is a constant in black neighborhoods. Hence “sidewalks” were identified by satirist Paul Kersey as one of those things “black people don’t like.”

Driving in a black neighborhood means having to avoid young African-Americans walking in the middle of the road, who curse or kick at cars when told to get out of the way. An inconvenience—except when their expression of territoriality predictably leads to accidents. As in the case of Steve Utash in Detroit, the “community’s” response to these accidents is to beat the driver almost to death and steal his wallet. [White Man Beaten by Mob In Detroit After Hitting Boy With Truck: Was It a Hate Crime, CBS Detroit, April 4, 2014]

Michael Brown had also participated earlier in the day in another common ritual in black neighborhoods—petty crime at the convenience stores. These stores are usually run by immigrants who quickly learn to arm themselves with pistols or bats. The result: racial tension between immigrants and the community they are “exploiting.” Shopkeepers are faced with a constant choice between cracking down on petty crime and risking violence, or allowing theft and suffering ruin.

A Pakistani shopkeeper in a neighborhood I used to live in allowed a certain African-American gentleman to steal a small amount of snacks for some time. The shopkeeper finally detained him and threatened to call the police. When the shopkeeper was threatened with violence, he produced a bat.

(In this case, the other black customers urged the thief to back down on the grounds that the shopkeeper had been reasonable by allowing previous thefts.)

This sort of cost-benefit analysis is simply a cost of doing business in a properly “diverse” neighborhood.

And it is precisely what happened in Ferguson. “Gentle giant” Michael Brown used his enormous frame to intimidate a much smaller shopkeeper into letting him walk away with stolen cigars. Not surprisingly, given the above cost-benefit analysis, the store’s owners did not call the police—a customer did, a distinction the terrified owners are exploiting to show their “commitment to the community.” However, the residents of Ferguson are still burning down and looting other convenience stores, and spray-painting “Snitches get stitches.” [“Snitches Get Stiches” message spray painted on burned-out QuickTrip, by Roche Madden, Fox2 St. Louis, August 11, 2014]

This expression of solidarity with criminals is typical of these neighborhoods. They display a tribal sense of solidarity against outsiders even when the community itself is victimized by crime.

For example, the recent drive-by shooting of a woman in Ferguson has attracted almost no attention and certainly no outrage from indifferent Ferguson residents (or, for that matter, from the national MSM).

Michael Brown, an “aspiring rapper,” seems to share this social code, at least judging from what we can delicately call his artistic output. [Michael Brown’s raps: Money, sex, drugs — and a vulnerable side, By Matt Hansen and Kurtis Lee, August 17, 2014]

His songs, if I can be forgiven the phrase, refer to the usual trifecta of petty sexual boasting, glorifying in murder and crime, and drug use. For example, the late Mr. Brown refers to himself as a “real killa” who says “I Only Like White Men On My Money” [i.e. portraits of George Washington and Benjamin Franklin ] and laughs about the sound of bodies hitting the ground. He boasts about how, in his town, “when the sun goes down, you in trouble now.” Not surprisingly, autopsy results also reveal that Brown had drugs in his system when he was shot. [County investigation: Michael Brown was shot from the front, had marijuana in his system, by Emily Wax-Thibodeaux, Wesley Lowery, and Mark Berman, Washington Post, August 18, 2014]

Of course, this doesn’t absolutely prove moral depravity any more than whites listening to metal songs about war prove they are bloodthirsty lunatics. But there’s this difference: violence in the black community is put in a context of black “resistance.” Therefore, the leadership of protests by openly violent, racist and anti-Semitic figures like the New Black Panthers Malik Shabazz, or black businesses confidently displaying signs indicating black ownership to avoid looting, is not unusual or offensive. In contrast, any such signs of white tribalism would be greeted with moral outage, not least from other whites.

Not surprisingly, a solid majority of blacks believe Darren Wilson, the officer who shot Michael Brown, is guilty of murder, compared to less than a quarter of whites and other minorities. Over 40% of blacks also believe the rioting is “legitimate.” [A Tale of Two Cities? Blacks, Whites Sharply Disagree About Ferguson, Rasmussen, August 18, 2014]

This celebration of aggression coupled with ostentatious proclamations of victimization and demands for federal intervention is also typical. As Alexander Hart recounted during the Epic Beard Man incident, when an old white man defended himself against a black attacker, a black woman gleefully urged her racial kinsman to attack the white man, wailed and moaned when the tide turned, urged the erstwhile attacker to press charges—and then obliviously videotaped herself stealing property as retribution.

Similarly, Michael Brown’s mother has already called for the death penalty for Officer Darren Wilson—which seems to be the only real goal of the protests [Who’s to blame for Ferguson Riots? by Gregory Hood, American Renaissance, August 14, 2014] .

The “protests” in Ferguson, when not involving looting and throwing Molotov cocktails, simply consist of young black males running at police bellowing obscenities and slurs and making threats—as even National Review has conceded: Ferguson Protester to Cop: ‘F*** You, N*****,by Ryan Lovelace, National Review, August 17, 2014. The obvious intent: to provoke a police reaction—which can then be interpreted by reporters and activists as “brutality” and further an artificially created Narrative with little resemble to facts on the ground. [With ‘Big Mike’ Scheme Team Assembled—We’ll Show You the Similarities of Ferguson, Missouri 2014 and Sanford, Florida 2012, The Last Refuge, August 18, 2014]

But this pattern of either being at your throat or at your feet is typical of the organized black “community.” It’s why entering a black neighborhood requires situational awareness simply to avoid attack. It’s why non-black residents constantly must ask themselves what petty violence and indignities they are willing to accept, knowing that their government won’t help them if they resist. It’s why whites are so desperate to avoid living in the midst of diversity—and why Ferguson’s white population has dropped from 75% to less than 30% within 20 years.

And it’s why the militarization of the police to patrol these areas is inevitable.

"Society cannot exist unless a controlling power upon will and appetite be placed somewhere, and the less of it there is within, the more of it there must be without."

But there is no “controlling power upon will and appetite” within America’s black neighborhoods.