The plain fact is that, probably via what seems from the outside to be some sort of a Journolist II-type co-ordination, the MSM has made huge contributions to the Ferguson fiasco—and above all to the paralysis of the police and to the near invisibility of the GOP, once again ducking its role as GAP, the Generic American Party.

If the MSM did have any honesty, they would have asked questions along the following lines:

The MSM have followed the same script they followed in promoting the Trayvon Martin Hoax. They are trying to score millions for the family of the “victim” (and his lawyers); diminish, excuse, and glorify black felons; handcuff and demonize white policemen; and get the man who killed their darling murdered. 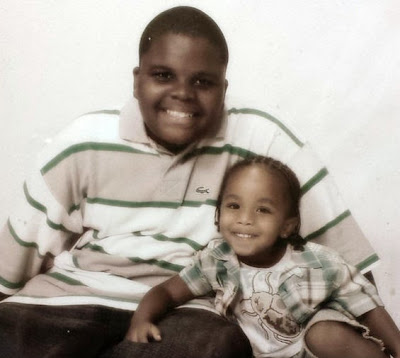 St. Louis Riverfront Times reporter Jessica Lussenhoppublished the Trayvon-style picture of a much younger, smaller, and cuter Mike Brown (allegedly 16, but looking more like 12), and quoted family members on his hopes of becoming a rapper. [Family of Michael Brown, Teenager Shot to Death By Ferguson Police, Talks About His Life, August 10, 2014]

Apparently, he already was an accomplished racist, gutter-mouth rapper (warning: listening to this may be physically painful), who bragged of sex and killing, but the family didn’t want the public hearing his “art.” [Listen to Mike Brown’s VERY Explicit Rap Songs Featuring Drugs, Drinking and Murder, SooperMexican.com, August 15, 2014]The MSM deal in the Politically Correct euphemisms.

But all were armed with deadly weapons—Bell with the car he was driving, bumping an undercover cop; Martin with the ground, into which he was smashing George Zimmerman’s head; Brown, aside from his attempt at murdering Officer Wilson with the latter’s service weapon, with a 6’4,” 292 lbs., body.

The MSM have also been outraged at anyone who would deviate from their script.Thus a Brian Haas, who is an alleged “criminal justice reporter” at Nashville’s The Tennessean, took a shot at disobedient bloggers:

Folks cheering on the death of traditional media need to see what's happening in #Ferguson. I don't see Buzzfeed out getting eargassed.

“People are just taking the opportunity to satisfy their desire for junk,” said one woman, knowingly. As if black people, the lust for theft encoded in their DNA, are just barely kept in line by authority [White St. Louis Has Some Awful Things to Say About Ferguson, August 15, 2014]

The MSM, like Brown’s mother, were outraged that the Ferguson PD released the videotape of Brown’s robbery of the Ferguson Market and Liquor 15 minutes before his attack on Officer Wilson. Ferguson PD Chief Thomas Jackson did so in defiance of Obama AG Eric Holder, and thereby exposing the Obama administration’s conspiracy to obstruct justice and to violate Officer Wilson’s civil rights.

The MSM have defined down Brown’s felony strong-arm robbery to mere “shoplifting,” and have used their usual racial codes for black riots and rioters: “protesters” and “demonstrators” “clashed with police.”

The Daily Beast’s credibility-challenged Michael Daly was so angry that the hoax was unraveling that he dredged up a 2009 incident, in which Ferguson officers had allegedly beaten an innocent black man, in order to assert that the earlier alleged case somehow proved that Officer Wilson was guilty of murdering Mike Brown.

When black Missouri Highway Patrol Capt. Ron Johnson was named by Democratic Gov. Jay Nixon to run policing in Ferguson, MSM reporters were ecstatic over the elevation of an Affirmative Action black man, and the corresponding disarming, emasculation, and humiliation of white Ferguson PD Chief Thomas Jackson. Remember this ululation?

[S]o far, their approach has sparked such a massive improvement that it looks like a case study in good policing techniques.

Rather than arriving in heavy riot gear, firing tear gas into the crowd, and arresting reporters, Missouri Highway Patrol Captain Ronald Johnson told officers to take off their gas masks, promised not to block the streets… [and began apologizing to blacks]. [In a Stunning Reversal, Police Join Peaceful Protest in Ferguson by Margaret Hartmann, New York Magazine, August 14, 2014 11:35 p.m.]

Similarly, New York Magazine operative Jesse Singal wrote of a photograph of Capt. Johnson marching with demonstrators:Why This Is the Most Important Photo From Ferguson.

What’s in this photo, though, is remedial — it’s about empathy, about treating people like human beings rather than dangerous others.

I argued that this picture, from the same march, was more significant: 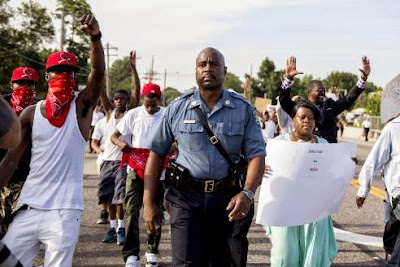 The man who is supposed to enforce the law is marching with masked members of a crime organization, who had almost certainly been causing mayhem. Swaine chose not to show his readers that.

Capt. Johnson had the police stand down. In what was either an echo chamber, or a Journolist II talking point, reporters spoke of a “block party” atmosphere. [An evening of calm before storms, St. Louis Post Dispatch, August 15, 2014]

But on Friday night, the thugs returned to rioting and looting. The St. Louis Post-Dispatch continued its happy talk of a “party”, but its cover-up had collapsed by the next night’s rioting. 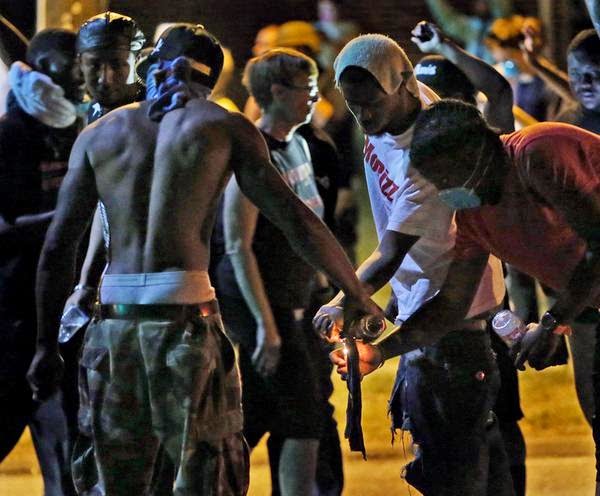 On Saturday and Sunday nights, the violence was worse than ever. On Saturday, Gov. Jay Nixon imposed a curfew, and declared a state of emergency in Ferguson. Capt. Johnson went back to tear gas, and the talk of “block parties” ended.

On Monday, August 18, with the violence even worse, Gov. Jay Nixon (D) relieved Johnson and put the white commander of the Missouri Highway Patrol, Col. Ron Replogle, in charge.

When the New York Times learned that the “eyewitnesses” reports of Brown fleeing had been refuted by the first published autopsy report, by Dr. Michael Baden, the celebrity medical examiner chosen by the “victim’s” own mother, the newspaper spun a diversion tactic headline: Autopsy Shows Michael Brown was Struck at Least 6 Times. [By Frances Robles and Julie Bosman, August 17, 2014]

Supporters of the hoax reacted with such outrage at those six bullets that you’d think it was 41.

The autopsy also supported the witness that the MSM ignored, but who was caught on tape in the background at the crime scene, saying that Brown had charged at Officer Wilson, just as the massive, severely intoxicated Rodney King had charged at LAPD officers who were trying to arrest him in 1991.

Like Brown’s family, the MSM have been trying to get Officer Wilson murdered. On Friday, CNN showed his house and street number, and named the street. The Daily Mail then repeated the offense. And on Saturday, Yahoo News reportorialist Jason Sickles published Wilson’s photograph.[DEATH WISH? Media Draws Map to Home of Ferguson Police Officer Who Shot Mike Brown, by Jim Hoft, Gateway Pundit, August 16, 2014,]

Wilson will not only have to move, but change his and family’s names, and possibly flee the country. There’s a special circle in hell for Sickles and his ilk.

Many observers think the MSM get “duped” or “fall for” these race hoaxes. But I have been studying race hoaxes since Tawana Brawley in 1988, and by the Duke Rape Hoax I concluded that the MSM are never fooled. They are always active collaborators—and in some cases, e.g., the AP’s Tom Hays, spin hoaxes out of whole cloth on their own.

The primary legal and moral blame for the riots and looting must go to the black rioters and looters themselves. Next comes what passes for their families and “the community.”

But the reason they felt so empowered was police passivity.

In Los Angeles in 1992; Seattle and Cincinnati in 2001; Baghdad in 2003; Ferguson, in 2014, and countless other incidents, looters ran wild—because they saw policemen or Marines ordered by their commanding officers to passively stand down.

Thousands of years ago, men had learned that the only effective way to deal with anarchy and looting is by what VDARE.com editor Peter Brimelow has called “ruthless coercion.”

Why then, were the men whose job it was to coerce looters standing by and watching?

Because American policemen realize that the Main Stream Media are undeclared combatants in a race war. They focus on whites shooting non-whites, so they can demonize the good guys.