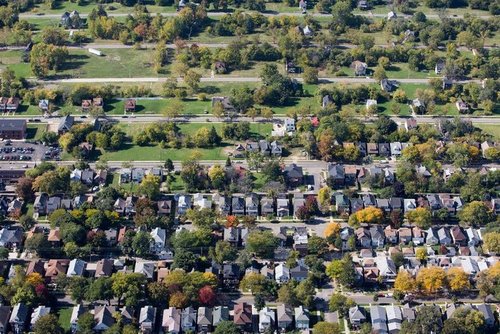 Top half is Detroit; lower half is Grosse Pointe Park

In 2014, we’ve been repeatedly informed of the urgency of blacks seizing the control of the municipal government of obscure Ferguson, MO, even though that didn’t seem to be a priority of many of the black people who actually lived in Ferguson. An instructive comparison is Detroit, which enjoyed black mayors for four decades until it finally became so depopulated that it now has a white mayor.

You can learn a lot about a place by seeing it from the air. I’m a pilot and an aerial photographer; I am also trained as an architect. I’ve always been interested in how the natural and constructed worlds work together, and sometimes collide. Issues like income inequality also reveal themselves quickly from above, and in Detroit and the surrounding area, the stark contrast between the haves and the have-nots couldn’t be more apparent.

Outside the city center, I flew over new homes built alongside lakes and country clubs. Five-car garages, swimming pools and pool houses decorated elaborately landscaped yards. However, once I crossed into the city limits, the urban fabric of Detroit looked like a moth-eaten blanket. Vast depopulated areas were filled with vacant lots and blocks of boarded-up and burned-out homes. This type of blight is visible in other American cities but few compare to the emptiness that surrounds Detroit’s downtown. …

From the air today, the decline appears to be slowing. The spaces once covered in rubble are cleared and mowed. Open green spaces, along with new community gardens and orchards, look almost bucolic against the downtown skyline. From my plane, I sense the potential for resurgence in these areas. I can see how neighborhoods could become more walkable and support mixed-use development, with new shops, public transit and nearby parks and schools. However, this resurgence relies on a city that is stumbling out of bankruptcy. It also depends on an agency with the authority to consolidate abandoned lots for development and open spaces.

I think that the inner ring of Detroit will win out in the long run, as cities are and will continue to be the greenest places to live on a per-capita basis. This is made only more striking when I fly over the suburbs and see the inefficiency of single-family homes. They are dependent on cars, for one thing, and are connected by miles of paved roads to single-use zones of office and retail developments.

These areas will not fare well, if we begin to mitigate climate change through measures like a carbon tax.

To really see just how despicable people are who drive around in their own private automobiles, you need to look down at them while flying around in your own private airplane.

Detroit’s rebound is just a matter of time. Someday, I believe, it will be comparable to the once rundown sections of New York, Boston, Minneapolis and San Francisco, cities that are now thriving.

So, to all the Ferguson-style suburbs out there, don’t you dare try to slow the outflow of the black underclass from desirable urban properties.

Nice little suburb you got here … Wouldn’t want anything Ferguson-like to happen to it.