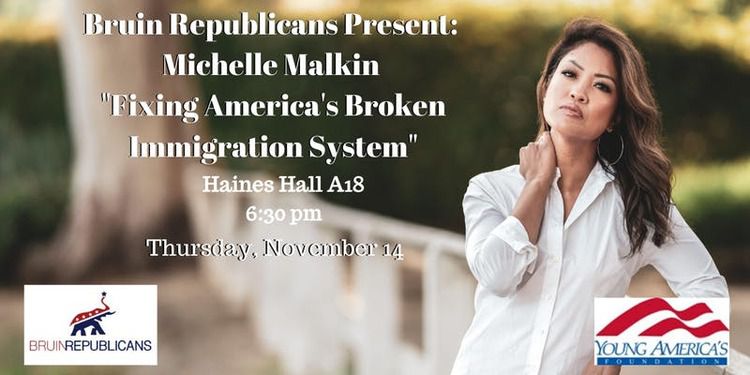 Thanks To Michelle Malkin For Refusing To Disavow Us, And A Host Of Beleaguered Patriots (Does Colorado Need A New Senator?)

Earlier: Michelle Malkin Calls For An Immigration Moratorium On Demographic Grounds, Saying "Do The Math!"

The Columbia Bugle tweeted this, and Michelle Malkin linked to it on MichelleMalkin.com:

"I will not disavow any of them, and I will not join the de-platforming witch-hunters who hypocritically call themselves 'free speech & culture warriors.'" pic.twitter.com/VlgMNtiaCb

Michelle Malkin is refusing to disavow. She's not only not disavowing us, but a host of others who are under attack not only by the Left, but by Conservatism, Inc.

Here's the relevant piece from her speech as prepared. Links were added by me, but won't be disavowed by Michelle:

America First activists are now being accused of engaging in dangerous “identity politics” and “ethno-nationalism.” The hypocrisy overfloweth. It’s the detractors of America First on the Right who shamelessly indulge in identity politics tokenism promoting a rainbow of brand ambassadors who don’t know what the hell they’re talking about when it comes to the most existential issues of our time and who immediately smear critics with the same old, worn brushes used by the radical Left. America First detractors indignantly demand that we young and old sovereignty advocates disavow European nationalist groups which most have never heard of.

Conservative Inkers now have their knives out for me, recycling Media Matters oppo research uncovering things I’ve never covered up in my reporting and advocacy on sovereignty issues over the last quarter century. They want me to disavow Nick Fuentes and VDARE and Peter Brimelow and Faith Goldy and Gavin McInnes and the Proud Boys and Steve King and Laura Loomer and on and on. They want to do to me what they’ve done to brilliant academics who’ve told the truth—Amy Wax at the University of Pennsylvania and Darren Beattie and Jason Richwine and Steve Sailer.

No, I do not agree with every last thing they’ve said or written or published or tweeted or thought with their inside or outside voices. But I will not disavow any of them and I will not join the de-platforming witch hunters who hypocritically call themselves free speech and culture warriors. I disavow violence. I disavow hatred of America. I disavow the systematic bipartisan betrayal of American citizens, students, and families by cynical politicians who promised for 25 years to build a wall, end the diversity visa lottery, end chain migration, and other memorized talking points. I disavow Republicans who told us to hold our noses and vote for open borders sellouts because we support the Second Amendment and are against abortion and we had no other choice.

Where are the disavowals of CPAC organizers who banned young nationalists but credentialed left-wing operatives masquerading as journalists like the Right Wing Watch henchman—and who embraced left-wing Soros-funded character assassin Van Jones?

I disavow the bullshit.

America First: The Torch Is Being Passed, MichelleMalkin.com, November 15, 2019

A number of political careers have been started by one great speech, as Peter Brimelow likes to point out—and boy, was he proved right in 2016. The great State of Colorado, where Michelle Malkin lives, is full of the kind of people who refuse to be pushed around, and for that matter, would refuse to disavow.

Do they really want to represented by a wimp like Cory Gardner, a world-class disavower? (See Still Playing "Not That Kind Of Republican": Colorado's Cory Gardner Urging Retreat In Border Showdown by James Kirpatrick for details.)

No, I think the good citizens of Colorado can do better.