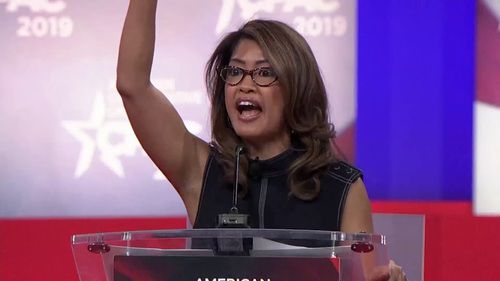 The central conundrum of American politics is starkly symbolized by CPAC, the annual gargantuan Conservatism Inc.-Rapes-Grassroots conference which is being held near D.C. this weekend. On the one hand, this year there is no overt opposition to Trump and he and other Administration officials are making much fawned-over appearances. On the other hand, the program (like the Trump Administration itself to date) otherwise shows little sign of anything other than Beltway Right donor-driven priorities, above all in a virtually complete shut-out of the immigration issue…until, that is, Michelle Malkin got up to speak.

CPAC hosted a grand total of one panel dedicated to immigration. Meanwhile, it hosted five events on capitalism, three on Israel, and two on Venezuela. The confab banned nationalists such as Nicholas Fuentes and Identity Evropa leader Patrick Casey, even though they had bought tickets, while rolling out the red carpet for black Leftist CNN commentator Van Jones and various CultMarx  journalists. (Significantly, VDARE.com was denied press credentials this year, as was Canadian conservative Faith Goldy, who is videocasting from the event for VDARE.com)

Jones was a particularly odious pick for CPAC. He founded the group Color of Change, which mastered the art of corporate intimidation to silence conservative voices they claimed were “racist.” [Conservative Consumers: Stand Your Ground, by Michelle Malkin, April 25, 2012].  Now Jones gets to pat conservatives on the head for advancing a Leftist agenda:

The white conservative audience applauded being told by a black Leftist that they’re leading the charge to reverse policies that cleaned up crime in America. [Van Jones: Conservatives Are ‘Leaders’ on Criminal-Justice Reform, Jack Crow, National Review, February 28, 2019]

Jones did run afoul of his audience with one statement, however. The CNN host falsely claimed that “undocumented immigrants” commit less crime than Americans, at  which the crowd loudly booed. [Van Jones Booed at CPAC for Claiming Illegal Aliens Commit Less Crime than Americans, by John Binder, Breitbart, February 28, 2019]

The sole immigration panel was not terrible. In years past, CPAC would only tolerate debates on how many illegal immigrants should be legalized. This year the panel  was a conversation between National Review editor Rich Lowry, and Texas Sen. Ted Cruz, both of whom have policies of saying good things about immigration restriction while not actually doing anything about it.

Cruz lashed out at Democrats for their support of illegal immigration and granting Amnesty to all illegal immigrants. “I think there’s a technical description of what’s going on, it’s that Democrats have gone bat-crap crazy,” the senator said. [Cruz slams Democrats on border wall, by Tal Axelrod, The Hill, March 1, 2019]

But Faith Goldy summarized the lackluster discussion with this tweet: “Cruz devoted less than half his time to actually discussing immigration (illegal only), with his bold idea to use budget reconciliation for funding. Then the moderator taught the crowd about how nationalism began in Israel & Cruz told young people to volunteer for GOP candidates.”

Michelle Malkin turned all that upside down. Dramatically, she decided to extend her mainstage speech to focus on immigration and to attack Conservatism Inc. for its protracted failure to address this issue. Malkin skewered CPAC for only having one panel on immigration, banning patriots from the event, and for inviting Van Jones to speak. She lambasted “immigration saboteurs” for subverting the GOP and the Conservative Movement into push for Amnesty. She attacked Paul Ryan, the Bushes, and the “ghost of John McCain” for failing to secure the border. This earned her repeated standing ovations from the audience. As VDARE.com has repeatedly pointed out, the people who attend this event are immigration patriots and want Republicans to push this agenda.

Unfortunately, not just CPAC but also the White House appear to be ignoring the base at the moment and forgetting the agenda that made Trump president.

It was reported this week that the administration is working on immigration legislation with organizations that lobby for more cheap labor. The possible deal in the works is unknown, but it is likely to increase guest worker visas. The groups involved in the negotiations should disappoint all immigration patriots: the Chamber of Commerce, the Hispanic Chamber of Commerce, the George W. Bush Center, the Kochs’ Latino outreach group the Libre Initiative, and the Association of Builders and Contractors. All of these groups are known for pushing amnesty and higher levels of immigration.[Globalist Business Groups with Koch, Bush Ties Dominate Immigration Talks at White House, by John Binder, Breitbart, February 26, 2019]

Worse, the White House staffers running the negotiations are Jared Kushner (of course!) and Brooke Rollins, who previously worked for one of the pro-mass immigration groups involved in the discussions.

The Watcher noted in February that it appeared likely that President Trump would push to increase immigration through an expansion of guest worker visas. The current negotiations further evince that we are on the verge of an immigration expansion. Which visas will be increased and how much of an increase it will be remains to be determined. There are already proposals that aim to double the number H-2b visas for low-skilled workers and ease the regulations concerning visas for high-skilled workers.

The White House looks likely to reveal its proposal soon. A major concern: whether it will include an amnesty for illegal immigrants. Kushner has recently talked about the possibility of giving green cards to illegal aliens brought to the U.S. as minors. That would legalize nearly 2 million illegals, and possibly more if the proposal adds protections for the relatives of those given a green card.

House Democrats have prepared their own “DREAM Act” to do just that. Their bill would legalize all illegals who came to America before they turned 18 and extend legal residence for migrants covered by Temporary Protected Status and Deferred Enforced Departure. [Democrats to reintroduce Dream Act on March 12 with TPS and DED protections, by Lindsey McPherson, Roll Call, February 28, 2019]

However, it’s not just Democrats who are pushing for TPS extensions.  On Thursday, Homeland Security Secretary Kirstjen Nielsen announced her department would be extending TPS protection for nationals of Sudan, Haiti, Nicaragua, and El Salvador for another year. This new order would give an estimated 300,000 nationals the right to stay in America.[Continuation of Documentation for Beneficiaries of Temporary Protected Status Designations for Sudan, Nicaragua, Haiti, and El Salvador, March 1, 2019]

Last year, Trump called these nations “s**thole countries” and wondered why America needs to take in their citizens. His administration sought to strip TPS protections from these foreign nationals based on our national interest.

This year, it appears Trump thinks we need people from “s**thole countries. Why the change?

The obvious change is that the courts put an injunction on Trump’s plan to rescind TPS protections, a common problem in his presidency, and one which may very well be solved eventually by the U.S. Supreme Court. But DHS’ extension reflects the broader shift in immigration with the administration. While Trump’s executive actions to get funding for the wall are commendatory, his administration seems to be giving up the fight in other areas on immigration policy.

There’s the previously mentioned embrace of more guest worker visas and the reversal on TPS. There is the possibility they may give “Dreamers” green cards in exchange for no patriotic immigration reforms. There is the disappearance from the Administration’s priorities of the RAISE Act, which would reduce legal immigration. There has been no talk of eliminating chain migration and birthright citizenship for months, and it appears the president and his advisers never sought to advance mandatory e-Verify in Congress.

The only immigration issues the administration seems to care about are the wall and immigration enforcement efforts. Both of those issues are important. But Trump’s progress on those fronts has been limited, to say the least.

The Trump administration and Congressional Republicans must soon change course if they want to win in 2020—and beyond.