The Messy Truth ABOUT Black Radical Van Jones—Now On CNN! 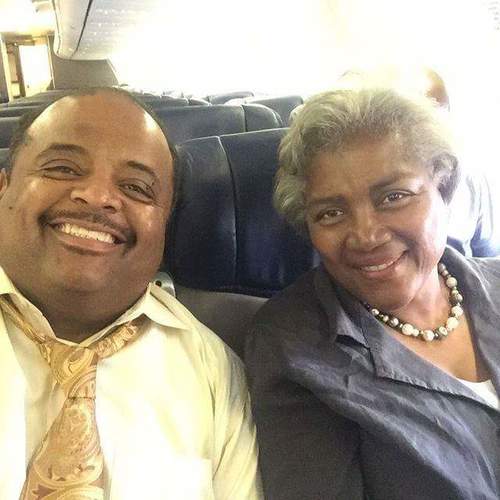 The grand journalism pooh-bahs at CNN were humiliated this election cycle when WikiLeaks revealed that former CNN contributor and interim DNC chair Donna Brazile had shared a question with the Hillary Clinton campaign in advance of a March Democratic primary town hall debate. According to CNN, "activist anchor" Roland Martin [Pictured right, with Brazile] and his production team at CNN's debate partner and identity politics network TV One were responsible for the leak. CNN host Jake Tapper called the episode "very, very troubling" and condemned the breach:

CNN president Jeff Zucker declared after an internal investigation that the network "would not partner ever again" with TV One.

But instead of weeding out left-wing partisans masquerading as mainstream political analysts from their lineup, CNN is doubling down. This week, the network debuted a news special called "The Messy Truth" hosted by "political commentator" Van Jones.

Before he was pontificating on CNN airwaves, he was a top environmental official of the Obama administration. The special advisor for green jobs at the White House Council on Environmental Quality held a special place in Obama senior advisor Valerie Jarrett's heart. The Chicago power broker took full credit at a fringe Daily Kos blogger conference for recruiting him and closely following his career.

"You guys know Van Jones?" she asked to roaring applause.

"Ooh. Van Jones, all right!" she cooed. "So, Van Jones. We were so delighted to be able to recruit him into the White House. We were watching him, uh, really, he's not that old, for as long as he's been active out in Oakland. And all the creative ideas he has. And so now, we have captured that. And we have all that energy in the White House."

One of Jones's more "creative ideas" was signing a petition in 2004 calling for congressional hearings and an investigation by the New York attorney general into "evidence that suggests high-level government officials may have deliberately allowed the September 11th attacks to occur."

That's right. Valerie Jarrett took credit for recruiting a 9/11 truther who endorsed a petition peddling the crackpot theory that President George W. Bush "may indeed have deliberately allowed 9/11 to happen, perhaps as a pretext for war."

Under fire, Jones disavowed the statement he had attached his name to—and decried those who dared to hold him responsible for his "creative ideas." It was conservative bloggers, not "real journalists," who exposed Jones's long record of radicalism to the public—leading to his resignation in September 2009.

Van Jones did not just accidentally slip through the cracks of the Obama vetters. They knew what he espoused before they installed him. So did his bosses at CNN who hired him in 2013.

It wasn't his expertise in political science, political history, electoral trends or journalism that got him the job. It was his social justice resume. He rose to public prominence as a race-baiting agitator at the Ella Baker Center for Human Rights in Oakland, funded by the George Soros-supported Lawyers Committee for Civil Rights Under Law, the liberal Ford Foundation and the Rockefeller Foundation. He became a public fixture in the Bay Area after crusading to free convicted cop-killer Mumia Abu-Jamal for a Marxist organization and lambasting moderate civil rights leaders for objecting to politicizing the classrooms.

In 2011, the late great Andrew Breitbart pulled no punches in describing Jones as a "commie punk" and a "cop killer-supporting, racist, demagogic freak." Jones had employed classic, radical Saul Alinsky-inspired campaign tactics to have Breitbart banned from a website he helped create—the left-wing Huffington Post—simply for writing articles providing alternative views of the tea party and for reporting on the Obama administration's transparency-stifling measures.

Bending to the censorious mob, HuffPo assailed Breitbart's "ad hominem" attack on Jones, which violated "the tenets of debate and civil discourse we have strived for since the day we launched."

The progressives had nothing to say, of course, about Van Jones's own ad hominem attacks when he obscenely and publicly assailed Republicans as "a—holes"—and when he financed, produced and participated in cop-killer Mumia Abu-Jamal's rap album, which railed against "imperialist" America and white "mother——s" as the "true terrorists."

Now, Jones—who most recently race-baited Donald Trump supporters by blaming them for a "whitelash"—has reinvented himself as a roving correspondent traveling the nation to analyze the election results and to lecture others to "be passionate. But be compassionate, too" with fellow citizens who hold different political viewpoints.

This is CNN: Enabling a lifelong, extremist demagogue—who has actively stifled and smeared conservatives, law enforcement and honorable public servants—to pose as a reasonable news personality Van-splainin' the world.

This goes beyond the sin of "fake news." It's gross media malpractice of the highest order.