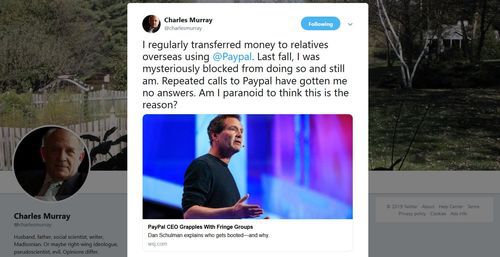 I regularly transferred money to relatives overseas using @Paypal. Last fall, I was mysteriously blocked from doing so and still am. Repeated calls to Paypal have gotten me no answers. Am I paranoid to think this is the reason?

This is a big issue for dissidents, and getting bigger week by week. First it was PayPal; then it was credit card companies; now it's banks, for goodness sake.

American capitalism is fast being SJW-ified. The end point desired by the people doing this stuff is, that those of us with incorrect thoughts will not be allowed to participate in the U.S. economy.

An interesting sidebar question is whether the U.S.A. reaches that point before China does. Place your bet.

A key difference is that in China the excluding is being driven by state power, while here in America it's private companies pushing the process.

That difference is between active and passive: the ChiComs actively desire the result, while our own state authorities merely can't be bothered to do anything to stop it. That's my take, anyway. Too charitable towards our authorities? Possibly.

There are nontrivial issues of liberty and monopoly power to be sorted out. For example: As someone in the comment threads always observes, the people who want financial institutions forced to serve dissidents are mostly the same people who do not want Christian bakers forced to bake cakes celebrating same-sex marriages.

It shouldn't be beyond our collective national wits to sort this out, but nobody much is trying. The federal government is too busy feeding illegal aliens, opening the jails, and planning the invasion of Vanuatu; the courts are stuffed with graduates of lefty law schools.

The few nonconformists who survive somehow in odd corners of the media dare not venture beyond Civic Nationalism; they tremble and sweat at the thought of having to give a voice on their programs to dissidents from further out, however polite and literate.

There are some promising lawsuits under way, but they are Davids taking on Goliaths. This is anyway a scattershot approach. At some point we're going to need federal legislation. Is Congress up to it? Does anyone think so?