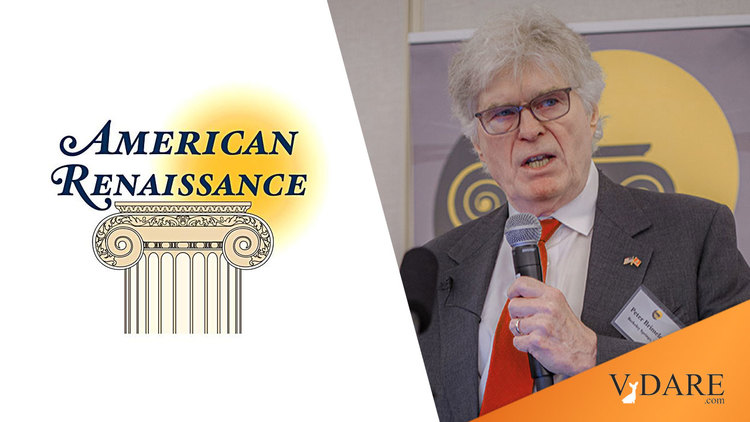 Peter Brimelow At AMERICAN RENAISSANCE On The Midterms: There May Be A Reconquista

Earlier, 2017: Peter Brimelow At AMREN: "We Have A Totalitarian Left In This Country"

The American Renaissance conference returned to Tennessee last weekend, and a report is up at Amren.com: AmRen Conference Comes Roaring Back, November 15, 2021.

They report on the speeches, and here's what they had to say about VDARE.com Editor Peter Brimelow's speech, links added by me:.

The second speaker was Peter Brimelow of VDARE.COM, who talked about what the mid-term elections could mean for us. He began by noting that Joe Biden has “gone full Merkel,” by throwing open the borders “with the obvious intention of electing a new people.”

Mr. Brimelow added that the new administration’s level of delirium means that “not being involved in the Capitol insurrection hoax will be no protection against a regime moral panic” that will be used against us, just as the frenzy over Unite the Right was an excuse to deplatform and demonetize everyone the regime fears.

Mr. Brimelow laid 3-1 odds, however, that the GOP will take back the house and the senate in 2022, and proposed a “to do” list: 1. Impeach both Biden and Harris for treasonously failing to enforce immigration law. 2. End birthright citizenship and retroactively revoke the last generation of “Americans” who got it. 3. Put a moratorium on all immigration and deport all illegals. 4. Get out of all refugee treaties. 5. Hive off Puerto Rico and give D.C. to Maryland, so Democrats can never turn them into states.

Mr. Brimelow noted the number of “red diaper babies” who have become professors and prosecutors, and was pleased that hard lefties are increasingly being called “communists.” He added that all this is driving the white-percentage vote for the Republicans ever higher, and cited the case of Logan County, West Virginia. In 1996, it voted 72 percent for Bill Clinton, but steadily shifted Republican to the point that in 2020, it voted 81 percent for Donald Trump.

Mr. Brimelow said there is no reason we cannot see a similar shift in the entire electorate, which could even lead to a reconquista.