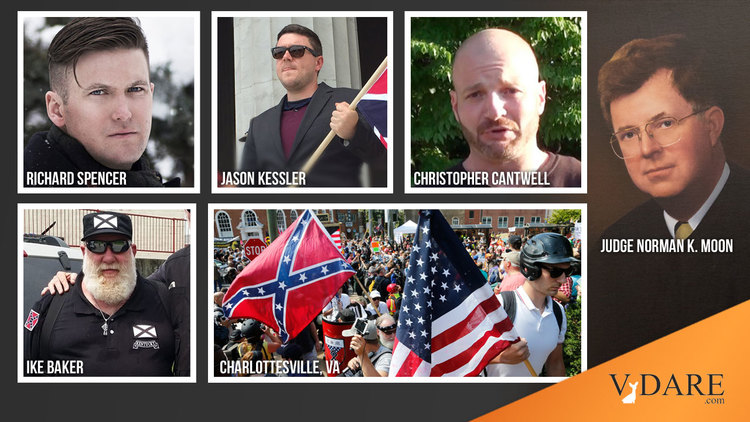 Half Way Into The Charlottesville Trial And Still No Conspiracy

James Carson Harrington
A+
|
a-

As we sluggishly crawl past the midpoint of the much-anticipated Sines v. Kessler civil trial, what the publicity-hungry plaintiffs and their lawyers hyped as a dramatic Nuremberg-style racial reckoning against white men expressing themselves at the August  2017 Unite The Right rally has turned into an extra-long episode of Judge Judy.

The plaintiffs pushed Judge Norman Moon to make the political ideology of the parties involved admissible in the conspiracy case, but so far this is all they have focused on. What the Dream Team of expensive corporate and political litigators—Roberta Kaplan, Karen Dunn, Alan Levine, and Michael Bloch [Tweet him]—seem to be surprised by is that their unconstitutional swipe at the First Amendment is being met with an equally asymmetrical type of resistance.

The most noteworthy wild card so far: Christopher Cantwell, the so-called “Crying Nazi,” who is currently in jail for an unrelated case and who is representing himself pro se (as are several others of the generally poor defendants). A Washington Post temperature-take published yesterday November 10 fixated on Cantwell’s full-spectrum use of the law to battle the band of “victims,” many who were recruited in this case through Leftist activist networks and via the ugly practice of attorney solicitation [White supremacists find a new platform to spread hate: A federal courtroom in Charlottesville, Ellie Silverman, Washington Post, November 10, 2021].

Cantwell has proved surprisingly effective. He has been willing to get his hands dirty in cross-examination and to go where most lawyers for the defense will not. Thus what on paper should have been a highly sympathetic witness for the plaintiffs, a TV-christened Charlottesville “survivor” named Marisa Blair (pictured right, her Speaker's Bureau headshot), who testified that the emotional trauma of the Charlottesville rally had caused her to lose her ability to open books, had her credibility obliterated when she responded during Cantwell’s aggressive cross-examination that her subsequently attending law school and passing the Bar exam was possible because these did not require being able to read.

Blair, like the other plaintiffs, made painstaking efforts to downplay the violent behavior and political extremism of the Antifa in Charlottesville. She denied that the crowd she was a part of was armed, violent or extreme. Cantwell made her look like a fool when he showed the jury a photograph of her flanked by baseball bat-wielding thugs holding banners promoting communism and wearing paramilitary uniforms universally understood to demonstrate allegiance to Antifa.

Marcus Martin, Blair’s ex-husband and a violent felon [Second man sentenced in Nelson home invasion, by Justin Faulconer, News-Advance, October 29, 2013], who was released from prison after a five-year stint not long before joining the Antifa mob opposing Unite The Right, was actually one of the people in the middle of the street photographed being hit by Fields’ car.

Martin testified that the defendants were responsible for his marriage to Blair quickly ending in divorce. He asserted on the stand that, since getting hit by the car, he has been disabled to the point of not being able to pursue his love of basketball.

While not admitted into evidence, pictures from Martin’s Facebook showing him playing in 2019 were published by online sleuths and have been making the rounds on the internet, notably on Telegram. 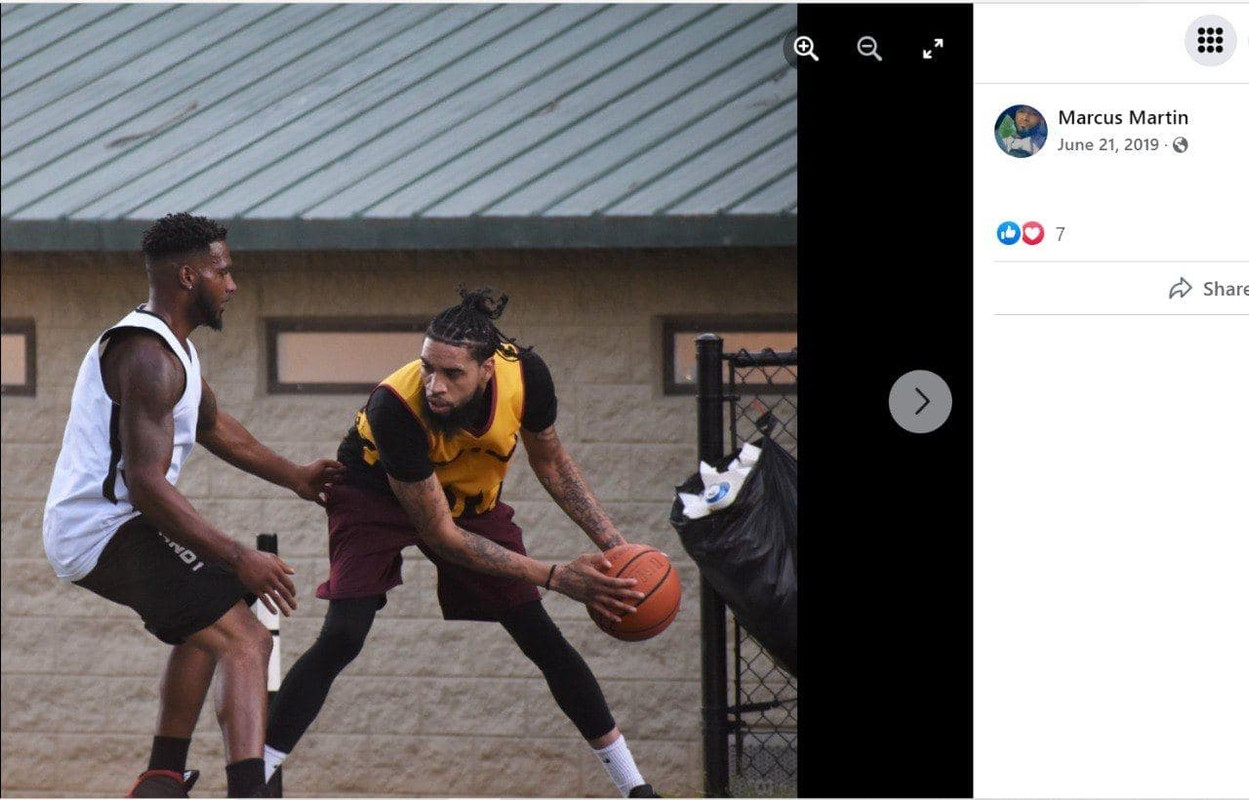 It’s safe to say that the inability of plaintiffs to keep their stories straight on little lies does not bode well for their broader complicated and confusing conspiracy theory that appears to be irritating both jurors and even the judge.

Seth Wispelwey, a Leftist political activist who dresses up like a cleric and who has ties to violent communist groups, embodied everything that is going wrong for the plaintiffs.

Wispelwey said he saw no weapons or violence at the rally—only to be caught on the back foot when confronted with photographs of other Leftists around him at the event wielding weapons and engaging in violence.

Repeated frivolous objections from his attorneys could not save Wispelwey, who is among one of the most extreme of the plaintiffs.

In one instance, Roberta Kaplan objected to a line of questioning by Richard Spencer against Wispelwey on the grounds of relevance. Judge Moon responded with a shocking "I don't think most of the preceding testimony was relevant to the case at hand.”

This is just one of several instances of Moon butting heads with the plaintiffs.

The judge has become particularly animated whenever Michael Bloch, a lawyer who made a name for himself getting violent non-white criminals off through gaming Bronx Juries [Bronx Juries: A Defense Dream, a Prosecution Nightmare, by John Kifner, New York Times, December 5, 1988 ], takes the stage. The dirty tricks and sleights of hand Bloch tried were all zapped by a frustrated and irate Moon.

Judge Moon, a man in his mid-80s, is a Democrat appointee, like Judge Bruce Schroeder in the Kyle Rittenhouse case, yet here he appears to be putting aside his partisanship to actually try to uphold the law and fair play. This is bound to trigger a new wave of “stale, pale and male” political attacks on older white judges if the activists using criminal and civil courts to advance their fringe and un-American agendas fail.

Objectively, the plaintiffs have shown that they have no facts or charisma. Sources inside the court room have said that the jurors look like they are about to pass out from boredom during lectures about the evils of racism and long-winded Pepe Silvia–style chart presentations seeking to tie a group of men that have never been in the same room until now to a grand Illuminati-style conspiracy to lynch and pogrom the minority population of Charlottesville.

For the hermetically sealed New York City echo chamber prosecuting this holy war against the UTR defendants, a waft of fresh Western Virginian air may spoil their party. Do the judge and jury care more about somebody, somewhere saying the “N-word” than potentially being forced to change their Thanksgiving plans to sit through more of this circus because Leftist lawyers want to emote at length about obscure defendants’ Politically Incorrect views?

This is a question both the media and chief fundraiser for the lawsuit Amy Spitalnick [Tweet her] appear to be nervously contending with. 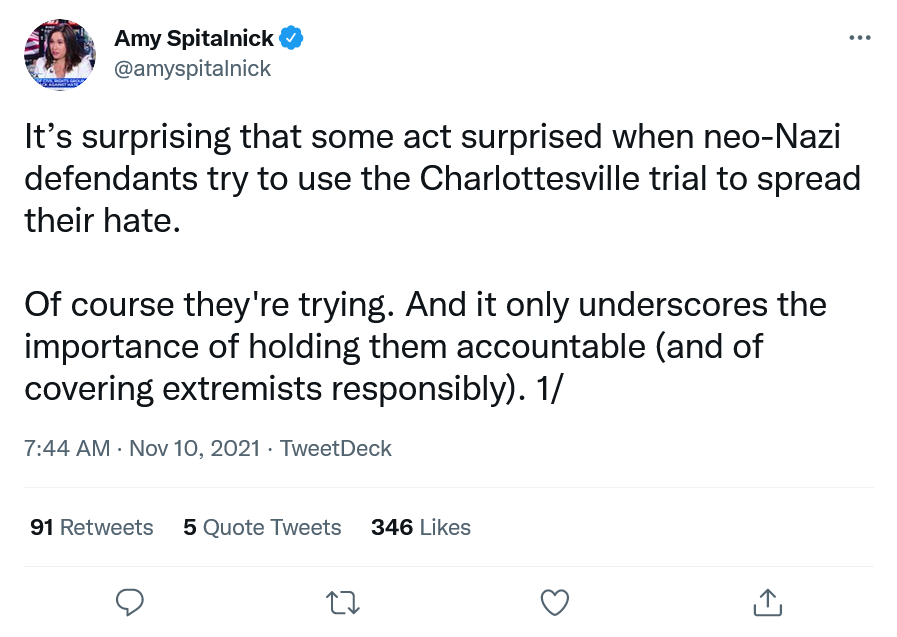 Many of the defendants in the case have so far expressed optimism regarding the result. Of course, no one can tell what a jury will do. But the verdict in Sines v. Kessler will be a test on whether truth and reason can still be panned out amidst lavishly funded lawfare mounted on the basis of lying Regime Media narratives.