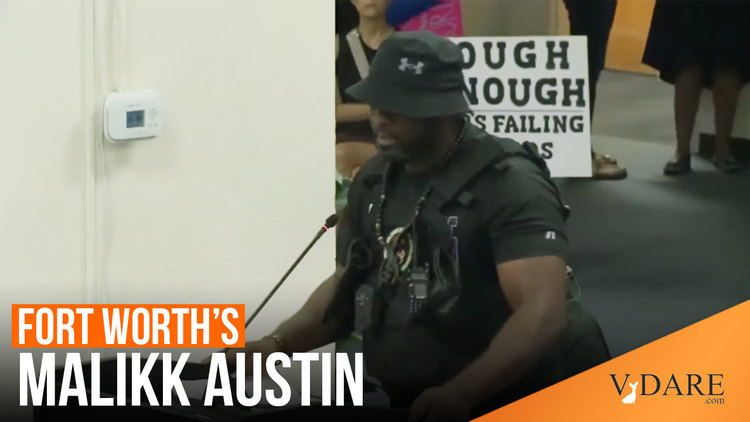 Fort Worth parents told Fox News that they felt threatened when a parent who defended critical race theory turned to the crowd during a school board meeting and said, “I got over a thousand soldiers ready to go,” before adding, “locked and loaded,” as officers escorted him out of the room.

“Absolutely, it made me feel threatened,” Hollie Plemmons, a stay-at-home mother of three, told Fox News on Sunday. “I’m scared and I’m afraid he’s going to do something.”

In the Fort Worth Independent School District board meeting on November 9, Malikk Austin turned to address the parents who had spoken up about critical race theory.

“For those who got an issue with this critical race theory equity, this is something I fight for, for my children,” Austin, who is African-American, began. “How dare you come out here and talk about the things that my daddy and my grandparents went through, the lynching, the oppression, Jim Crow, and my kids are still being afflicted by this.”

“We are not our ancestors,” Austin added. “I got over a thousand soldiers ready to go.”

As people in the crowd shouted that Austin should address the school board, not the audience, he responded by referencing, “My First Amendment rights!”

When Plemmons repeatedly spoke up and offered to speak with Austin, he shot back, “But you’re not intelligent, you are not intelligent.” (His remarks in the video begin around the 34:30 mark.)

After Austin’s one minute to speak had run out, officers came and escorted him out of the room. During this time, he shouted, “I’ll bring my soldiers with me next time… locked and loaded.”

Plemmons responded, asking, “Did you just threaten me?”

He repeated, “Locked and loaded.”

Plemmons told Fox News that she thought Austin’s remarks were “directed right at the three of us,” since she had already spoken that evening and mentioned critical race theory (CRT)—a framework that involves deconstructing aspects of society to discover systemic racism beneath the surface.

“I felt it was completely inappropriate that the board did not stop that,” she said. She noted that whenever someone in the crowd shouts, the board president will usually silence the audience. She claimed that the board’s decision to allow Austin to keep speaking was a “double standard” because the board supports CRT. Rather than silencing Austin during his remarks, the board allowed him to finish his one-minute speech before nodding to officers to escort him out.

“Everyone there felt threatened,” Carol Guarneri, a grandmother of four in the Fort Worth ISD, told Fox News. She claimed that Austin had attended an August school board meeting in “tactical gear” (he appears at around the 39-minute mark in this video).

House Republicans in the Judiciary Committee have sent a Tuesday letter to Attorney General Merrick Garland after an FBI whistleblower provided ‘a protected disclosure’ revealing that “the FBI’s Counterterrorism Division is compiling and categorizing threat assessments related to parents, including a document directing FBI personnel to use a specific “threat tag” to track potential investigations.”

The evidence – an email sent the day before Garland testified on October 21 – “referenced your October 4 directive to the FBI to address school board threats and notified FBI personnel about a new “threat tag” created by the Counterterrorism and Criminal Divisions.”

Garland notably came under fire last month during Congressional Testimony, where he denied “weaponizing” the FBI against parents opposed to Critical Race Theory and vaccine related mandates – using a flimsy memo from the National School Boards Association as justification. Of note, neither the memo nor the DOJ have provided specific examples of alleged ‘threats’ against school administrators.

The controversy began on Oct. 4, when Garland announced a concentrated effort to target ‘any threats of violence, intimidation, and harassment’ by parents toward school personnel. The disclosure came days after a national association of school boards asked the Biden administration to take “extraordinary measures” to prevent alleged threats against school staff that the association said was coming from parents who oppose mask mandates and the teaching of critical race theory.

According to the DOJ, a task was to be assembled to determine how to use federal resources to prosecute offending parents as well as how to advise state entities on prosecutions in cases where no federal law is broken. The Justice Department will also provide training to school staff on how to report threats from parents and preserve evidence to aid in investigation and prosecution.