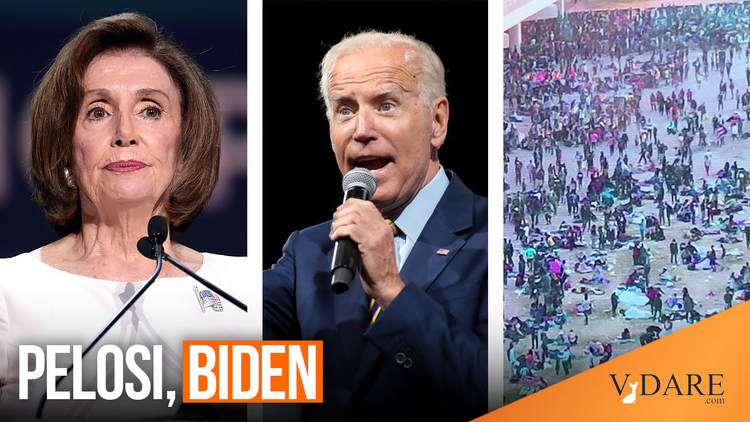 Even before the Democrat disaster in the Virginia governor race [Republican Glenn Youngkin Won Virginia's Governor Race In An Early Warning Sign For Democrats, BuzzFeed News, November 2, 2021—30 minutes ago], it simply was not clear that the Democrats could pass their infrastructure and social spending bills and the immigration treason buried in them [Democrats give Manchin earful on lack of progress on spending bill, by Alexander Bolton, The Hill, November 2, 2021]. It’s possible the whole thing could collapse, and the federal government will be financed through Continuing Resolutions. Which will probably mean that the Biden Regime will resort to Electing a New People through unconstitutional Executive Actions.

Last week saw the significant news that the Biden Regime plans to pay as much as $1 billion to illegal aliens because the Trump administration enforced immigration law. The money is supposed to compensate, pursuant to lawsuits filed by Treason Lobby ambulance chasers, illegals who “suffered” damages because of POTUS 45’s so-called family separation policy. Each illegal would get $450,000; each family about $1 million. The American Civil Liberties Union has identified more than 5,000 minors who were separated; thus, the massive payout [U.S. in Talks to Pay Hundreds of Millions to Families Separated at Border, by Michelle Hackman et al., Wall Street Journal, October 28, 2021].

It’s notable that a group supposedly dedicated to the civil liberties of Americans works more for the nonexistent rights of criminal aliens. But this been the ACLU’s M.O. for years. And it doesn’t simply want money for illegals. It wants permanent legal status for the plaintiffs, too. “President Biden has agreed that the family separation policy is a historic moral stain on our nation that must be fully remedied,” ACLU deputy director Lee Gelernt told the Wall Street Journal. “That remedy must include not only meaningful monetary compensation, but a pathway to remain in the country" [U.S. in Talks to Pay Hundreds of Millions to Families Separated at Border, WSJ, October 28, 2021].

The U.S. is in talks to offer immigrant families separated at the border in 2018 about $450,000 a person in compensation, people familiar with the matter say https://t.co/mmY60OIfHy

Significantly, Biden’s plan to make illegal aliens millionaires didn’t sit right with some of his own people. Several attorneys in the Department of Homeland Security involved in the negotiations were reportedly outraged over the demands, and some even requested removal from the proceedings. They couldn’t believe that the government would reward illegals with massive payouts. One DHS lawyer commented that illegals would receive more compensation than the average family of 9/11 victims. But senior DHS officials thought that necessary because the American government was responsible for their suffering.

Forcing Americans to pay for their own Replacement—like making condemned prisoners dig their own graves—is definitely a Trend. A federal jury just awarded over $17 million to illegal aliens who were detained at a Washington State facility on the grounds that GEO Group, the private prison company that ran the facility, violated Washington’s minimum wage laws by paying the immigrant detainees $1 a day. [Immigration Detainees Are Owed $17 Million in Back Pay, Jury Says, by Eduardo Medina, New York Times, October 31, 2021].

Message: the Ruling Class cares more about illegal aliens than about U.S. citizens.

Although the Democrats still have not resolved their differences on infrastructure/ Build Back Better social spending despite weeks of negotiations, the party still hasn’t given up on the Amnesty it contains. 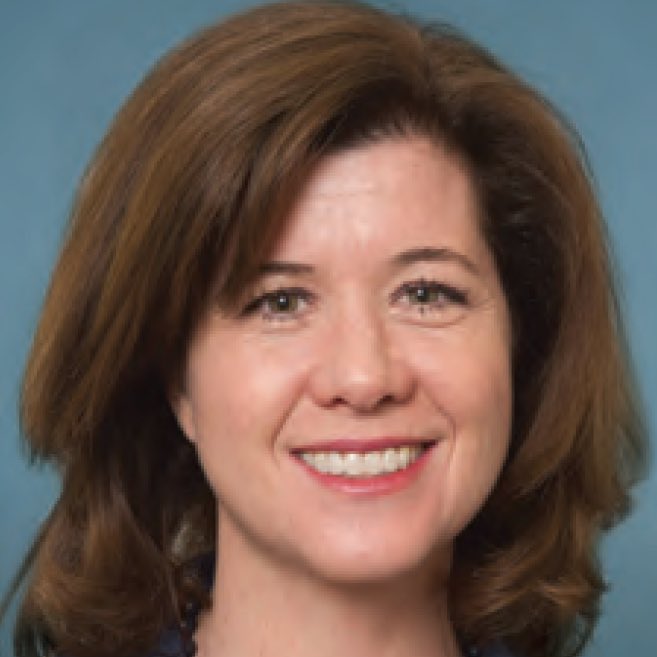 As most VDARE.com readers know, Leftists have wanted a pathway to citizenship for at least 8 million illegals. So far, Senate Parliamentarian Elizabeth MacDonough has thwarted that effort. The budget bill must receive her approval to avoid the standard practice of requiring a filibuster-proof majority. The reconciliation process only requires a simple majority to pass if the parliamentarian finds its provisions narrowly pertain to the budget. MacDonough found the Democrats’ initial Amnesty proposal outside the scope of the budget. Democrats tried another method of pushing Amnesty through an update to the immigrant registry that would allow all illegals who arrived in the U.S. before 2010 to naturalize. MacDonough shot down that idea, too

But Democrats haven’t given up. In his broad proposal for the budget bill, the risibly titled “Build Back Better” plan, Biden pledged $100 billion to “reform our broken immigration system.” To appease moderates, the new plan cuts down the original cost from $3.5 trillion to $1.75 trillion. But very little of that cost cutting came from immigration, as the original plan stipulated a little more than $100 billion for Amnesty. That’s how firmly committed the party is to open borders [Immigration relief in flux as Biden unveils reconciliation framework, by Caroline Simon and Suzanne Monyak, Roll Call, October 28, 2021].

Even though Biden pledged billions, Democrats still don’t know exactly what Amnesty will look like. The two leading ideas are parole and the registry update. Parole would give illegals the right to stay here, but not a pathway to citizenship. Last week, Illinois Sen. Dick Durbin said the Democrats are close to finalizing the parole idea and submitting it to the parliamentarian. And though MacDonough shot down the registry idea, House Speaker Nancy Pelosi still touts it as a way to reach a deal within her own caucus. The plan: OK a bill with the registry, then switch it out for the parole proposal if Macdonough approves it. It’s unclear what Democrats will do if the Parliamentarian deep-sixes the parole, especially if progressives and moderates reach a deal [Democrats Quietly Scramble to Include Immigration Provision in Social Spending Bill, by Sean Sullivan and Marianna Sotomayor, Washington Post, October 26, 2021].

All this means that Parliamentarian MacDonough is one big stone in the progressive shoe. Progressives want to override her and pass the Amnesty. More than 40 House Democrats wrote to Majority Leader Chuck Schumer earlier this month demanding that he ignore MacDonough. They argue that the presiding officer of the Senate—either Vice President Kamala Harris or Vermont’s Patrick Leahy—can overrule the Parliamentarian. Many progressives have threatened to withhold their vote if the bill does not include some form of Amnesty. Immigration, again, is their obsession [House Democrats press Senate leaders to override parliamentarian on immigration, by Suzanne Monyak, Roll Call, October 21, 2021].

But that unprecedented move risks alienating crucial moderates. If either Kyrsten Sinema of Arizona or Joe Manchin of West Virginia insist on the Parliamentarian’s approval, an override is dead. Sinema and Manchin have already shown a strong willingness to buck party demands over the reconciliation bill—albeit not due to immigration. They complain it costs too much and will substantially raise taxes. Manchin and Sinema strongly support the filibuster, another Senate norm that Democrats want to eliminate. So those two won’t agree to parliamentarian override.

Importantly, the bill contains other dangerous immigration proposals besides Amnesty that MacDonough has not ruled against. These would give so-called “unused” green cards from years past to foreigners who legally apply for them and ease the way for immigrants to bypass per-country caps and other restrictions. The budget bill aims to dole out 226,000 “unused” green cards to migrants in the legal immigration backlog, which would significantly increase legal immigration [Biden looks to spend $100B on immigration, by Rebecca Beitsch, The Hill, October 28, 2021].

Many of the recipients will obtain them as a form of reparations. The budget bill explicitly allows migrants who applied for entry via the diversity visa lottery under Trump, but were denied due to their country’s placement on the travel ban. They would get a green card as compensation. That’s another terrible precedent.

Family separation and the travel ban were both hated policy items during the Trump administration, so now Biden is making amends for them. But it’s unlikely to stop there.

It’s quite possible that the “victims” of Remain in Mexico could receive similar treatment. Despite a historic border crisis that shows no sign of abetting, and a court order forcing Biden to reinstate Remain in Mexico, the Biden administration still wants to end it. Remain in Mexico makes alleged asylum seekers wait outside the country as their claim is processed. It frees up government resources at the border and keeps illegals out. It also reduces the incentive to make the trek to the border.

Nevertheless, DHS chief Alejandro Mayorkas, a Jewish Cuban immigrant, ordered his department to phase out enforcement despite the court order. Mayorkas admitted the policy reduces illegal immigration, but said it was necessary to end because it imposes “substantial and unjustifiable human costs on the individuals who were exposed to harm while waiting in Mexico” [Biden admin moves to end Trump-era 'Remain in Mexico,’ by Adam Shaw, Fox News, October 29, 2021].

That language justifies possible reparations in the same way the hysterical condemnations of family separation did. If the government says you suffered unjust harm due to basic immigration enforcement, you might be entitled to compensation: cash, a visa, a green card, or permanent legal status. Reparations for illegals would become settled government policy.

If the reconciliation bill fails, Biden will likely exploit his executive powers to grant some form of legalization. The administration already announced that the vast majority of illegals are safe from deportation and further restricted the areas in which they can be arrested [ICE officers can arrest aliens New Guidance Bars Immigration Enforcement in ‘Protected Areas,’ by Miriam Jordan, New York Times, October 27, 2021]. Biden has no compunction about violating the Constitution and exceeding his powers to accomplish this. Again, he cares far more about illegal aliens than he does about American citizens. Angel Moms can’t expect compensation because Biden allowed illegals to flood the country and kill their children. But illegals can expect a big check if they ran into border agents.

The only solution is impeachment. Of course, this idea won’t pass in a Democrat-controlled Congress, but that’s not the point. Republicans must show how grave Biden’s abuses are. Doling out reparations to illegals is just his latest impeachable offense.

It’s time for bold lawmakers to draw up the articles of impeachment and make the party campaign on this in 2022. There is no more treasonable offense than prioritizing lawbreakers over law-abiding citizens.