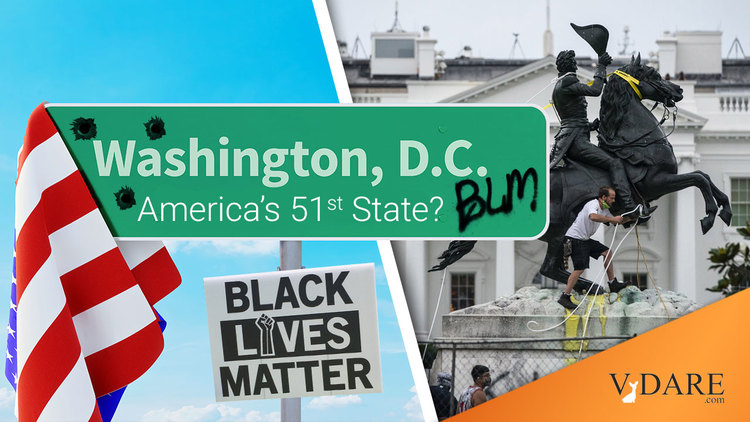 Earlier by Patrick J. Buchanan: Why DC Statehood Is a Suicidal Gamble

"How many legs does a dog have if you call his tail a leg?" asked President Abraham Lincoln, who answered his own question:

"Four. Saying that a tail is a leg doesn't make it a leg."

And Congress' saying that D.C. is a state would equally contradict truth and reality, as our nation's capital lacks all of the attributes of a 51st state of the Union.

The city was carved out of Maryland and Virginia in 1790, which voted to cede 100 square miles on the Potomac for a capital city of the United States to become the domicile of the federal government.

Is that sufficient for a state of the Union? Only if one wishes to change the character and composition of that Union.

Consider. The smallest state for 230 years has been Rhode Island. At 1,214 square miles, it is still 18 times as large as D.C. If D.C. were to become a state, it would be a microstate, smaller than every one of the 24 remaining counties of the state, Maryland, from which it was carved.

The Maryland counties that border D.C., Montgomery and Prince George's, are eight times the size of Washington, D.C., and each has a million people, dwarfing the 700,000 residents of D.C.

Directly across the Potomac in Virginia is Fairfax County, also eight times as large as D.C., and with hundreds of thousands more people.

Supporters of statehood say D.C. has more people than Wyoming.

True, but Wyoming is also roughly the size of the United Kingdom, and more than 1,000 times the size of Washington, D.C.

Even by the standards of American cities, Washington ranks no higher than 20th in population.

By the terms of its admission to the United States as a state, the Republic of Texas was ceded a right to split into as many as five states of the Union, which it was joining. FDR's future vice president, the Texan John Nance "Cactus Jack" Garner, was all for it.

"An area twice as large and rapidly becoming as populous as New England should have at least ten Senators," Garner told the New York Times in April 1921, "and the only way we can get them is to make five States, not five small States, mind you, but five great States" [FIVE STATES OUT OF TEXAS?; Congressman Garner's Plea Based on Need of Enlarged Senatorial Representation Boundaries Proposed. Need of More Senators. Jumps in Population., April 24, 1921].

Statehood for little D.C. could start a trend where mega-cities like Chicago and New York, with five and 10 times the size and population of D.C., secede from their respective states and seek full statehood as well.

What is at the root of this drive to make D.C. a state?

The answer may be found in the political character of our capital city.

Since the 23rd Amendment was ratified, 60 years ago, D.C. residents have voted in 15 presidential elections. In all 15 elections, D.C.'s three electoral votes have gone to the Democratic nominee.

Since the mid-1970s, D.C. has had home rule and, in every election since, has chosen a Democratic mayor and a Democratic city council.

How irredeemably Democratic is D.C.?

Which brings the question: What is D.C.'s grievance that America must somehow rectify by making it a state?

Answer: Democrats want D.C. to have two senators to cement their control of the U.S. Senate, as they pack the Supreme Court by expanding the number of justices from nine to 13.

This is a naked national power grab—pure and simple.

If the real concern were the inability of the D.C. electorate to vote for members of Congress, that could be remedied—by returning the residential portions of D.C. to Maryland, whence they came, or by allowing D.C. residents to vote in Maryland's congressional elections.

Making D.C. a state would send two Democrats to the Senate indefinitely. But it would violate the constitution and compact under which the nation was founded. And it would start a stampede for other disfiguring alterations, like packing the Supreme Court by adding four new justices.

And a second unraveling of the republic would begin.