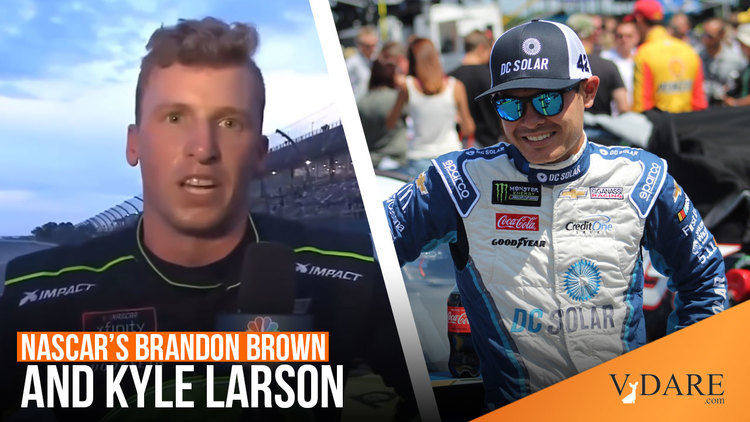 NASCAR, the National Association for Stock Car Racing, ended its 2021 season in Phoenix on November 7, with the victory of Kyle Larson (more on him later) [Kyle Larson caps dominant season with Cup Series championship, Nascar.com, November 7, 2021].

The 2021 NASCAR season was the origin of the “Let’s Go Brandon” slogan. On October 2, Brandon Brown had just won a NASCAR XFinity race and was being interviewed by reporter Kelli Stavast. In the background NASCAR spectators were chanting “F--- Joe Biden.” The chant was very understandable, yet Kelli Stavast said the crowd was chanting “Let’s go Brandon,” thus giving birth to the slogan.

The F--- Joe Biden chanting is another example of the ongoing vulgarization of American society. Critics of Trump of course would never do such a thing.

In 2019, Trump had 2018 NASCAR champion Joey Logano, team owner Roger Penske and Joey's  #22 Ford Fusion at the White House. In February of 2020, soon before the COVID lockdowns, Trump was Grand Marshal of the Daytona 500 and was well received.

Southern whites, and adjacent demographics in other parts of the country, are NASCAR's base, which has led to calls for more diversity, that is, fewer whites, in NASCAR. The sport's management is determined to diversify.

IN 2004 NASCAR started an affirmative action program known as “Drive for Diversity.” It did bring in some minorities, but, with one exception, they haven’t been highly successful. Examples:

In a June 2020 interview with Don Lemon, Wallace called for the prohibition of the Confederate flag at NASCAR races, and what do you know?   That came to pass two days later, making me think that it was a setup.

This was followed the same month by the absurd noose-gate in which NASCAR went into a self-righteous tizzy over the “discovery” of a “noose” in Bubba Wallace’s garage stall at the Talladega (Alabama) Superspeedway. This resulted in the deployment of 15 (!) FBI agents to investigate what later turned out to be a loop on a rope with the nefarious purpose of pulling a garage door down. The case was solved by an independent blogger before the FBI could crack it. [See ”Noose” Threatening Half-Black NASCAR Driver Investigated by 15 (!) FBI Agents Turns Out To Be Garage Door Pull Rope With Loop.]

Until last month, Bubba Wallace had never won a Cup Series NASCAR race. But on October 4, Bubba won a race at Talladega Superspeedway. How did he win? The race was supposed to have 188 laps, but due to the weather, it was called after 116 laps, at which time Wallace had been briefly in the lead. So it was good timing to be in the lead when the race was called! [Bubba Wallace earns historic first NASCAR Cup Series win, by Chris Estrada, NBC Sports, October 4, 2021]

In 2021, Larson returned, having sufficiently repented. And he had his best season ever, winning ten races and culminating with winning the season championship of the highest-level NASCAR Cup Series.

What can we expect in NASCAR's future? More ham-handed attempts at diversity? More inadvertent politicization?

It should be interesting.