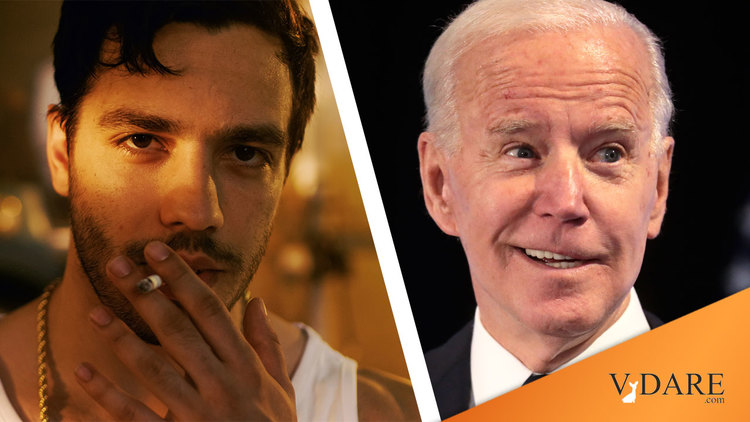 So is the Mexican government glad that Biden is opening up the border?  Yes, but....

Reuters has noticed this dichotomy.  On the one hand, "Mexico has praised Biden for offering a pathway to citizenship to millions of U.S. residents of Mexican origin, and for rolling back Trump-era policies that sent U.S. asylum seekers back into Mexico to await their court hearings."

On  the other hand.. "Mexico’s government is worried the new U.S. administration’s asylum policies are stoking illegal immigration and creating business for organized crime, according to officials and internal assessments seen by Reuters" [Exclusive: 'Migrant president' Biden stirs Mexican angst over boom time for gangs," by Dave Graham, Reuters, March 10, 2021].

Well, yeah, it's going to do that.

On the one hand, the Mexican government likes the U.S. to have a more open border.  On the other hand, that also causes problems for Mexico.

Ever since President Joe Biden won the White House vowing to undo the hardline approach of his predecessor Donald Trump, Mexico has both looked forward to an end to migration burdens imposed by Trump, and braced for a new influx of people.

They're glad the Remain in Mexico policy has ended, as it involved non-Mexicans congregating on the Mexican side of the border.  On the other hand, they now have to put up with hordes of Biden Migrants trudging across Mexico.

Detentions on the U.S border have surged since Biden took office on Jan. 20. Mexico has urged Washington to help stem the flow by providing development aid to Central America, from where most migrants come, driven by a humanitarian crisis.

This is something that AMLO has been promoting, a big aid program, with much of the financing coming from the U.S.

Previously unreported details in the internal assessments, based on testimonies and intelligence gathering, state that gangs are diversifying methods of smuggling and winning clients as they eye U.S. measures that will “incentivize migration.”

Well, of course gangs are going to do that.

Apprehensions on the U.S.-Mexico border in February hit levels unseen since mid-2019, and were the highest for that month in 15 years, data reported by Reuters showed.

It's the Biden Border.

Among U.S. steps Mexico worries are encouraging migration are improved support for victims of gangs and violence, streamlining of the legalization process, and suspension of Trump-era accords that deported people to Central America.

Well, you can't have it both ways.

Recent Mexican policies are also encouraging migration, according to one assessment. It saw potential fillips in measures such as offering COVID-19 vaccines to migrants, as well as better protections for undocumented children.

In other words, the Biden Border is strengthening Mexican organized crime, not a good development.

So what is organized crime doing?

“Migrants have become a commodity,” the official said, arguing they were now as valuable as drugs for the gangs. “But if a packet of drugs is lost in the sea, it’s gone. If migrants are lost, it’s human beings we’re talking about.”

So neither Mexican nor American officials wanted to talk to Reuters publicly about this.

Higher concentrations of migrants in border areas have encouraged gangs to recruit some as drug mules, and kidnap others for money, said Cesar Peniche, attorney general of Chihuahua, the state with the longest stretch of U.S. frontier.

Both Mexican and U.S. policy should be more clear-cut so as not to spur illegal immigration, he told Reuters.

As always, smugglers are very adaptive.

Communicating via social media such as Facebook, WhatsApp, Instagram and YouTube, smugglers update migrants on impending checkpoints, when freight trains they can jump on pass, where to stay and how to navigate immigration laws, the official added.

To ease their passage, smugglers advise Central American clients to register complaints with authorities saying they have been victims of extortion or, for young men, that they have faced death threats from street gangs, the assessments show.

And, as in previous years, migrants are being told to bring along children to make it easier to apply for asylum.

Mexican intelligence shows smugglers’ transit costs vary widely. One assessment said an unaccompanied Central American minor could secure passage to the U.S. border for about $3,250. By contrast, for African travelers, the rate was $20,000. Asians must also pay more.

That's a lot of money.

One evaluation set out concerns there could be a significant influx in migrants from outside the region - the Caribbean, Asia, Africa and the Middle East - as coronavirus-led border restrictions begin easing.

If the U.S. encourages this sort of thing, yes of course that follows.

Even as Mexicans hail Biden’s cancellation of work on Trump’s border wall, some officials say it is time Mexico returns to an idea the government raised in 2019: improving the infrastructure along its own southern border with Guatemala.

“Mexico spends more on every new wave of migrants than that would cost,” said another official. “We have to do it.”

It's not in the interests of Mexico to be overrun by hordes of Central Americans, Africans and Asians on their way to the U.S.A.  And every illegal alien detained in Mexico is one that is not going to (at least for now) be entering the U.S.