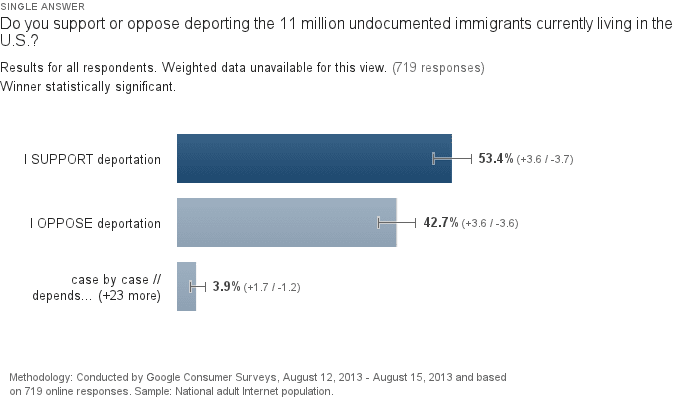 The Fulford File | Regular Americans` Opinions On Deportation, In One WONDERFULLY "Xenophobic" Chart

Over on TechCrunch, a tech industry site, reporter Gregory Ferenstein is shocked to find that Americans don't like illegal immigration, and think illegals should be deported—which is, after all, the law. The article is called: Why We Can’t Trust Polls On Immigration, In One Horribly Xenophobic Chart, and my question is "Why 'Horribly'?"

While polls consistently show that Americans overwhelmingly favor the tech industry’s #1 legislative goal, comprehensive immigration reform, I wondered if I could also get them to agree to a horribly xenophobic plan that was the opposite of the proposed bill: deporting all 11 million undocumented immigrants. We conducted a CrunchGov poll with Google Surveys to find out and the results, you’ll find, are surprising.

First, remember that Americans like to agree to things: they say yes to bigger cars, more debt, and, of course, more croutons on their all-you-can-eat Olive Garden salad. So, when pollsters ask Americans if they “support” an idea, the answer is, on average, yes.

In our poll, a majority of all Americans (53%) and a whopping 74% of Republicans want to kick out every undocumented immigrant (details here*). Bear in mind, no one, not even the most anti-immigrant members of Congress, are proposing any remotely close to this idea. At most, Congressmen disagree over whether current undocumented immigrants should be permitted to become citizens, not whether they can stay in the country. More importantly, the results from our on-going CrunchGov Poll find that roughly the same percentage (64%) want to grant a pathway to citizenship as kick them all out. Confused? You should be, because both of those views are diametrically opposed.[More] 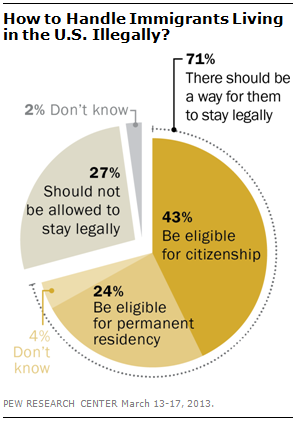 Seriously, even the "good" poll he links to [Most Say Illegal Immigrants Should Be Allowed to Stay, But Citizenship Is More Divisive Pew, March 28, 2013 ] includes 27% for "Should not be allowed to stay legally" which certainly implies that deportable illegals could be deported, assuming Congress would appropriate the funds.

You see, Congress has passed laws saying that illegals—all of them—can be deported. Because of ethnic activists and Big Business donors, Congress has shown what economists call a revealed preference for not deporting them, but the law still says they can all go.

The reason you don't regularly see polls saying "Percentage of Americans Who Want To Deport Them All" is because regular pollsters don't dare ask them. (TechCrunch really only did it as sort of a joke, see above.)

As for what Congress, even the Republicans, want, it's worth rereading a Sam Francis column from 2002: Poll Exposes Elite-Public Clash On Immigration

But what's unusual about this poll is that it divides up the responses according to whether the answers were given by "the public"[PDF] (ordinary people like you and me) or the "leaders"[PDF]—that is, the people to whom I refer as the "ruling class," which consists of the following categories: members of Congress and their top staffers, top-level executives of federal government agencies, corporate CEO's, union presidents,religious leaders, college presidents and faculty, presidents of think tanks and foundations, and editors, columnists, and television commentators.

The public is the voters.

What's revealing in the poll is that there is a significant—in fact, oceanic—division between what the leaders of the country think and what the public thinks about how much of a threat immigration represent.

Asked how big a threat are large numbers of immigrants and refugees coming into the United States over the next 10 years, the public responded that they represent a "critical" threat by some 60 percent. A mere 14 percent of the leaders, on the other hand, that mass immigration is a critical threat

Deporting every illegal in America would be an ambitious project, but it would be possible.

As I pointed out in the first article that list, in 1954, President Eisenhower deported a very large number of illegals in an initiative called Operation Wetback. As Bob Park, who as a young Border Patrol officer took part in Operation Wetback, pointed out to me, Eisenhower didn't have to have any laws passed to deport people—illegal immigration was already illegal, and deportation is how the law dealt with it.

But there are other solutions to the problem. If America stops offering illegals jobs, welfare, and free schooling for their children, they'll go home.

But in any event, the point is that there is no clamor from the public for legalization. The public wants fewer illegal aliens, not a path to citizenship for the ones who are already in place.

And this August, I expect more Congresscritters will be hearing that from their constituents, the people who will be voting  in the one poll that really matters to a legislator—the upcoming midterm elections.