Here at VDARE.com Editorial Central, we're waiting around for James Kirkpatrick to file his thoughts on CPAC and Super Saturday, which we hope to post later tonight...maybe very much later.

But, aside from all the horse-race stuff, we should step back and acknowledge: what a great night (and, so far, a great primary season) for immigration patriots! 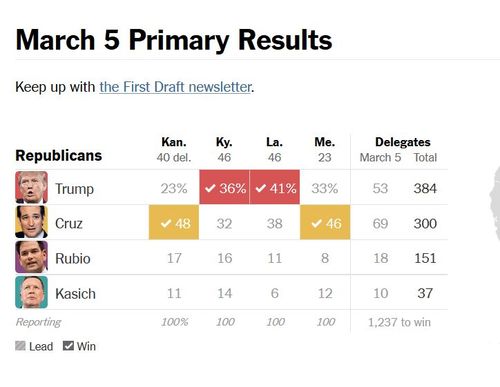 Together, they got two-thirds to four-fifths of the votes cast in each state. Both Trump and Cruz campaign as immigration patriots—the latter a recent, and very welcome, development. The Amnesty/ Immigration Surge candidates, Establishment favorite Marco Rubio and John Kasich, were utterly destroyed—and Rubio is now lyingly claiming to be an immigration patriot, which has probably fooled some Stupid Party members.

On top of this, Trump and Cruz have actually been quite minimal in their references to immigration and the National Question. It's taken almost nothing for Trump to emerge as a nationalist candidate.

Mr. Rubio — who in recent days has focused on his home state, which he must win in its March 15 primary if he hopes to continue his campaign — made a detour to Puerto Rico on Saturday, campaigning in San Juan and holding a news conference, mostly in Spanish, in a last-minute push to win the primary.

Rubio has already endorsed Puerto Rican statehood. This would greatly intensify the pressure for institutional bilingualism in the U.S. The patriot alternative: Official English—and independence (=Slovakia-style expulsion) for Puerto Rico.

Donald Trump already rattled the late, unlamented Jeb! by challenging his campaigning in Spanish. It's time for another Trumpeting!