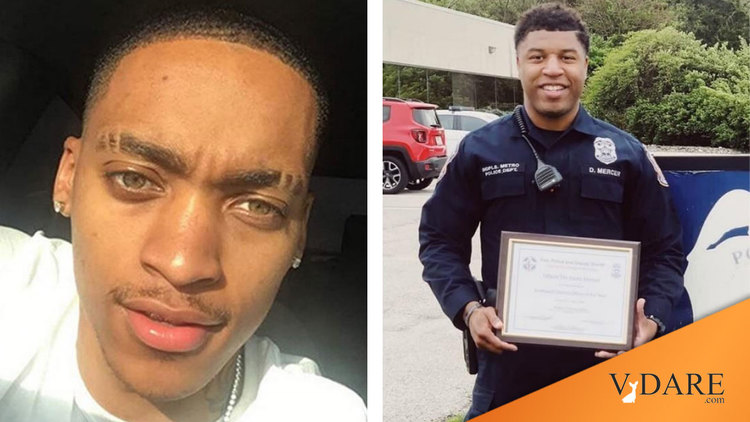 Black Cop Sues NFL Over Black Lives Matter Blood Libel: They "Honored" The Black Gunman Who Tried To Kill Him

Earlier: Which NFL Players Will Put Althea Bernstein's Name on Their Helmets?

A black cop is suing the NFL for calling his justifiable homicide of a black man who tried to murder him a Black Lives Matter case:

Interesting legal analysis of an interesting legal case. A (Black) cop is suing to NFL for defamation after the NFL "honored" the man he shot and killed, in a very justified shooting. https://t.co/ewabQkZA0t

There is an interesting lawsuit out of Indiana where Indianapolis Metro Police Department Officer De’Joure Mercer is suing the National Football League (NFL) for defamation after the NFL claimed that his shooting of an African American man was due to “systemic racism.”  (Officer Mercer is also African American).The suspect, Dreasjon Reed, reportedly fired repeatedly at Mercer before he killed him — a shooting found to be justified by a review board.  A special prosecutor also announced that a grand jury rejected any charges against Mercer.

The complaint below details how Reed stole a handgun from a pawn shop in Texas and livestreamed himself committing a “drive-by” shooting in which he fired the stolen handgun blindly into buildings as he drove past. [More]

The NFL is honoring this guy, with a quote from his mother saying he "deserves justice" which in fact, he seems to have already received:

Say His Name: Dreasjon Reed
Dreasjon is one of the many individuals being honored by players and coaches this season through the NFL’s helmet decal program.#SayTheirStories: https://t.co/vwi75WmNxr pic.twitter.com/wWaasw6LBp

I knew that although Dreasjon Reed's name hasn't appeared much in the news because it was an obviously justifiable homicide, it would appear in our archives in the post where Steve Sailer pointed out that obvious hate hoaxer Althea Bernstein, who got slightly singed in what she said was a hate crime and many people suspect was her being involved in committing BLM-related arson, was one of the many names you could put on your helmet in the NFL.

Here's the list, to which I added links at the time we posted it:

Steve asked "Where are such classic names as Jussie Smollett and Tawana Brawley?"